There is a classic Gore Range ski descent dubbed the “Deming Drop” on the 12,902′ Deming Mountain’s north face. I have alway had this on my tick list and recruited Derek and Mikey to join me to attempt this ski two Saturdays ago on June 4. And, come to think of it, I had actually never summitted Deming so that was task #1. Then, we would evaluate the couloir and see here the day took us. And, as usual, we had our K9 companions Kona and Derek’s dog Maude. Though, in retrospect, at the end of the day, we realized its not a line for dogs as its pretty darn steep and is just a bit too serious of a line to feel comfortable taking dogs down it. 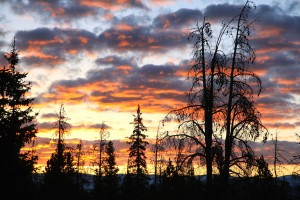 Derek & Maude slept at the Meadow Creek TH outside of Frisco, Mikey came from Denver that early morning, and Kona & I left my house at 3:15am arriving at the TH around 4am. We were hiking up the dry steep trail by 4:18am in trail shoes and skis and ski boots on our backs. We finally reached snow line around 10,500′ after maybe 2 miles and got the load off our backs by switching to ski boots and skinning. I had heard it took other friends about 4-5 hours to reach Deming’s summit and thus the shortly after 4am start. Fortunately, we were able to stay on top of the semi-frozen snow as it was still very early. We crested into the meadows and got our first glance of the east face of Deming. 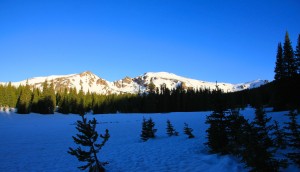 Deming Mountain. We ascended up the moderate east slopes on its right flank

We continued skinning up the broad drainage and ascended the east slopes of Deming. Short steeper skinning pitches  broke up the longer mellower slopes. 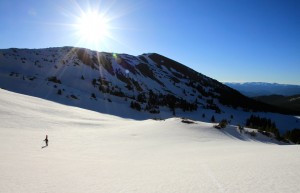 The sun crests and it really heats up 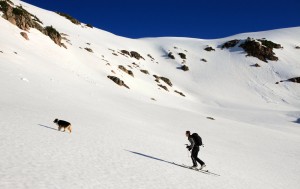 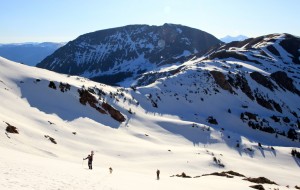 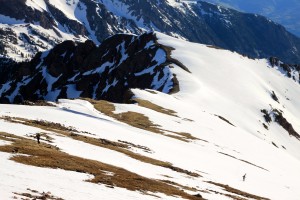 The upper east face of Deming 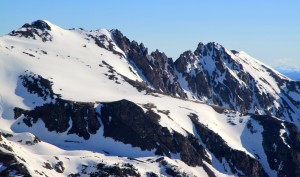 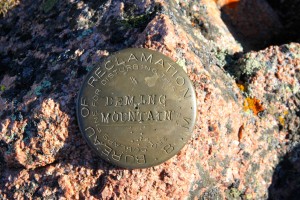 Kona and I reached the summit just before 8am, dropped my skis, and went over to check out the Deming Drop. It took us 3 hrs and 45 minutes to reach the summit and actually we all expected the ascent to take us longer. The couloir was steep, especially the first 50-75′ or so. My buddies Ben Conners & Brian Miller estimated this top pitch at around 50 degrees in their book Climbing & Skiing Colorado’s Mountains: 50 Select Ski Descents. This top pitch was in the sun as it faced east and was warming up just nicely. However, most of the couloir was still in the shade at the point of where it mellowed to 40-45 degrees below the steepest pitch to the bottom. 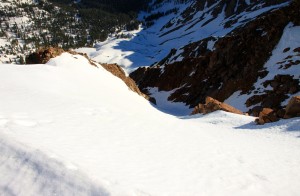 Looking down the Deming Drop

I figured a good hour’s wait would get the entire couloir in the sun and make it nice and soft and much safer than it would be in the shade and hard and icy. Kona and I went back to the summit and welcomed Derek and Maude and then Mikey maybe 5 minutes later. We snacked and took pics and enjoyed a rare windless and warm Gore summit. 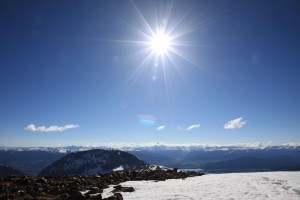 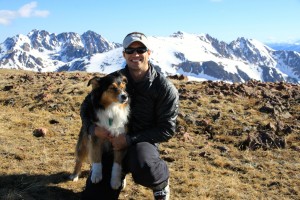 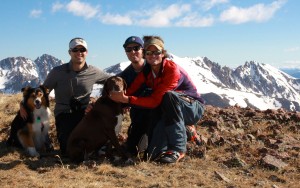 And all of us on Deming’s summit

9am rolled around and we hiked over the summit ridge tundra to the top of the couloir. Much to my surprise the deeply inset north-facing couloir was still in the shade pretty much the same as it had been. The steepest upper pitch was really baking in the sun. I was definitely a bit disappointed and knew better than to ski a 40+ degree couloir which has not been warmed by the sun. We continued to wait until 9:45am and the sun was slowly creeping down the steep rock walls of the couloir, but hadn’t hit the bottom 1,200′ of the couloir yet. Mikey had a deadline of 3pm back in Denver and the longer we waited the more Derek and I admitted it was a bit more of  serious couloir than we thought especially with dogs in tow. But, gosh, I wanted to ski it so bad, but likely would have needed to wait another hour or two. By the time we would have hiked back up to Deming’s northeast ridge and skied down the entire approach would be so very slushy making travel very slow and Kona and Maude would have an epic time through the deep wet snow. Derek and I were thinking about just waiting, but ultimately the dog factor sealed it for us and we all went back to the summit and skied the super fun east face of Deming. The Deming Drop would have to wait for next year! 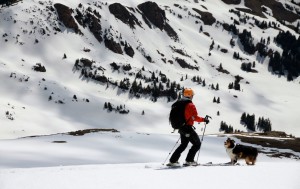 Me skiing Deming. Photo by Mike 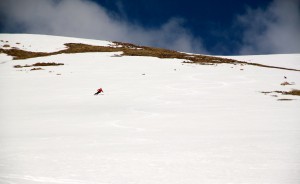 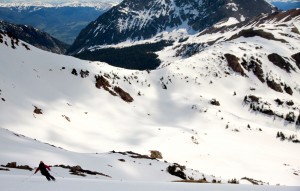 Derek with Eccles Pass beyond 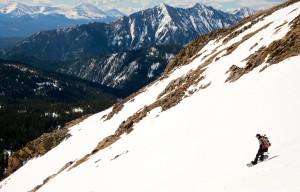 Mikey with Peak 1 and Peak 2 in the distance 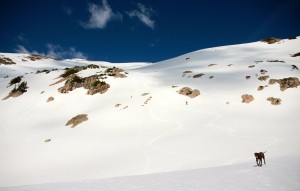 Kona finishing up the east face

We then put our skins back on and headed up to Eccles pass for some more views and a few more turns. 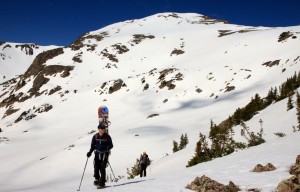 The snow got really sloppy down in the Meadow Creek basin and the dogs were struggling to stay afloat. Not to mention it was pretty hot as well. Nevertheless, we reached snow line, traded skis and boots for trail shoes, and made it back to the TH at around 1pm. We were bummed not to ski the Deming Drop, but glad we made the right call. Spring skiing is ll about timing. Next time we will get a later start knowing the couloir gets sun late. And, oh yeah, leave the dogs at home 🙂