Having spent a decent amount of time climbing in this little basin I call Asgard Basin on the east side of Mt. Vahalla in the Gores, there was one other goal in this small, secluded basin I had and that was skiing Vahalla’s arcing Heavenly Couloir. The name “Heavenly Couloir” was coined by Stan Wagon and has the shape of a crescent moon extending from Vahalla’s summit east, then north, and finally a bit west/northwest down into Asgard Basin below Asgard Ridge, Loki, & Thor Towers. It doesn’t present a ton of vertical skiing (maybe 1,600′ to Asgard Basin below Asgard Lake), but its proximity to Asgard Basin and remoteness have always been intriguing to me. Its definitely more of an adventure ski as its some effort to make it happen.

During this whole COVID-19 pandemic, it has been a tough to find time for just Kristine and I together. After many ski mountaineering days this year without the other, we were able to top off the spring ski mountaineering season together all thanks to our friend Sarah Sullivan for coming over at 5:30am to do an all day babysit. It really does mean the world to us to do big days together like we did so often for so many years pre-kids. The day before we had driven over to Summit County with the kids and Kona and had left a car at the North Rock Creek TH so we would be able to do an up and over traverse of the Gores from west to east skiing the Heavenly Couloir along the way. We biked on the bike path and attempted to give Sawyer a go at climbing the 1st pitch of the Royal Flush with me belaying her from above. It did not work out so well. It was too daunting for her having me 90′ above her and not below her. Anyway, it was a learning experience. Multi-pitch routes will just have to be something we try way down the road. 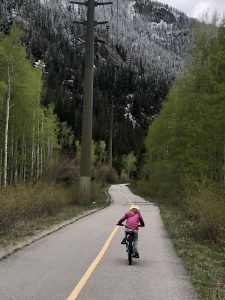 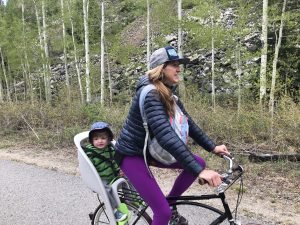 Up at 4:30am, kids still asleep, we put all the gear in the car, and left Sarah around 5:45am. I think we actually started hiking around 6:30am from the Gore Creek/Deluge Lake TH in our trail runners with skis and boots on our packs. My plan was to take the Gore Creek Trail east to Deluge Creek and take the “winter route” up to Deluge Lake, which I know well by now. It was a lot of miles and effort bushwhacking with heavy packs, but we eventually made it to snow line. We continued to walk up the frozen snow in our trail runners and switched to skinning around maybe 10,600′. 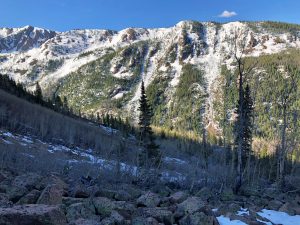 Can you spot Kristine bushwhacking thru the thicket?

We made good progress up past the frozen Deluge Lake to the base of the southwest face of Mt. Vahalla where we traded the skins/skis for crampons. 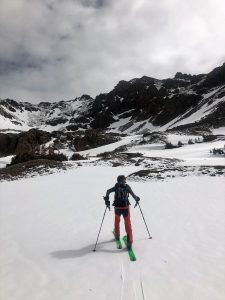 Skinning towards Vahalla dead ahead! 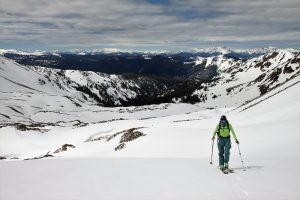 Kristine and the Deluge Lake basin 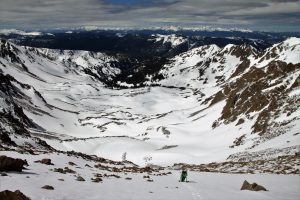 Cramponing up! This face is always fun to climb

A little video of Kristine climbing: 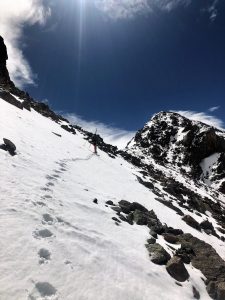 Me making my way to the high saddle between Mt. Vahalla & Palomino Point

We took a bit of a snack and water break at the saddle and recharged for the final 400′ to the top up Vahalla’s northwest ridge. This ridge ended up being a pretty fun scramble and I believe we topped out around 11am or shortly after for maybe 4.5-5 hours up. 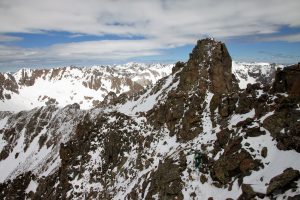 Kristine and Palomino Point next door to the northwest 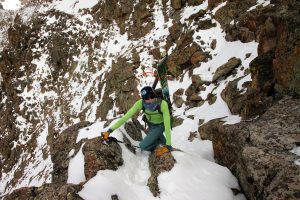 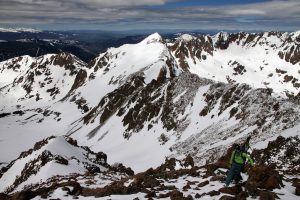 Final feet to the summit with the southeast face of Grand Traverse Peak in the background – a great ski tour in its own right!

It was great to get back to the summit of Vahalla. It had been several years for me. Probably since J and I climbed Asgard Ridge to Palomino Point and then up to Vahalla from the east in August of 2014. It was fairly chilly so we only stayed on top maybe 20 minutes.

We clicked into our skis and set off skiing a few turns down the east face to a point where we crossed over the east ridge onto the northeast face and into the Heavenly Couloir. 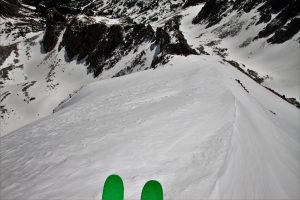 Looking down the Heavenly 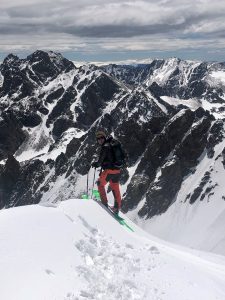 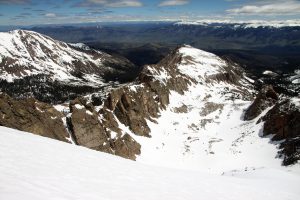 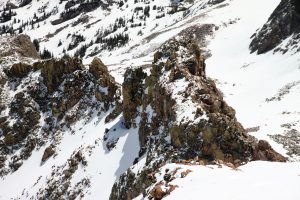 Looking down on Loki Tower from the Heavenly 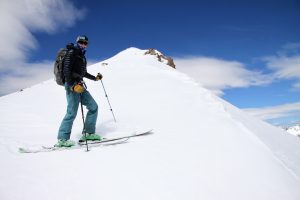 Kristine up high on Vahalla

We had gotten a decent amount of rain the day before which equated to at least a few inches of fresh snow up on the high peaks including Vahalla. I knew it wasn’t enough to make it dangerous, but we still needed to manage the fresh snow slough, which would inevitably cave off on top of the firm base underneath. Kristine took a video of me skiing the upper couloir – it was pretty good snow:

I skied down into the couloir proper and stopped above a rock outcrop and caught Kristine skiing down behind me. I think I probably caved off half of the mountain’s top layer of snow over the steep cliff on its east face, but at least the slough didn’t get in my way. Kristine skied it very well and kept on going down from where I was. 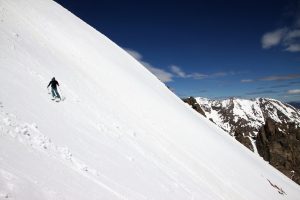 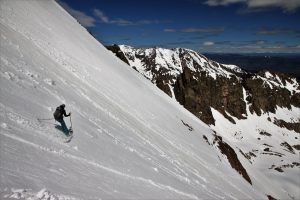 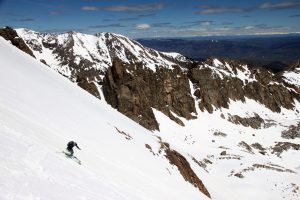 Asgard Ridge in the foreground with Keller Mountain in the background 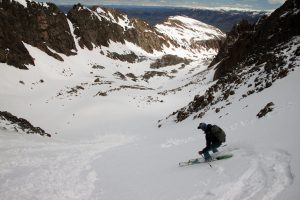 And, then another video of me skiing the lower Heavenly: 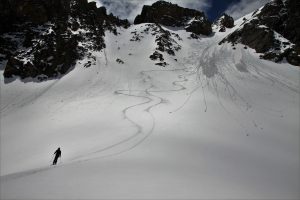 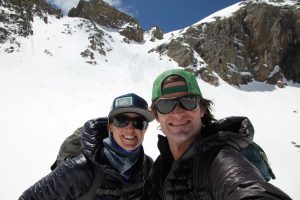 Happy to be together skiing a new peak for us

It was a super fun and enjoyable ski, but short-lived, yes. Now, we had to start preparing our exit strategy. One option had always been to reclimb the couloir and downclimb some of our climbing route and ski out Deluge Creek to Gore Creek. But, to me, it always means more to do a traverse, an up and over, to the other side of the range. I knew the approach into Asgard Basin from the east and North Rock Creek TH pretty well from several climbing trips in there. So, that was my plan – to exit via the lower flanks of Asgard Ridge and into the woods to the Gore Range Trail. I knew it would be a lot of bushwhacking, but I didn’t realize how tough it would be with skis on our backs. It made bushwhacking in there with climbing packs a walk in the park. C’est la vie. 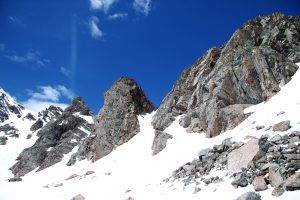 A few of the towers along Asgard Ridge I remember well 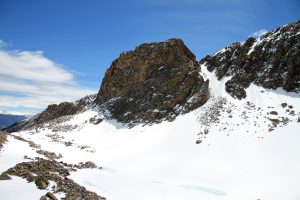 We had to regain a few hundred feet to reach the nice mellow southern flank of lower Asgard Ridge where we continued to just walk with skis on our backs. 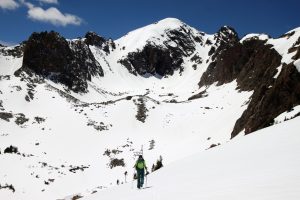 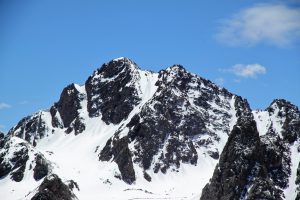 A really cool, steep line we spied off of Hail Peak’s northeast face

We were able to ski where Asgard Ridge dove down into the trees for awhile which was nice. However, eventually the snow got so patchy in the thick trees and brush, we decided to switch to trail runners, put the skis and boots on our packs, and just stay on the dry portion of the ridge on its southern side. 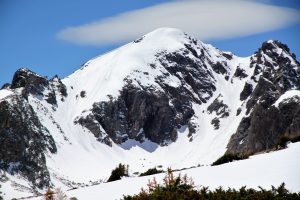 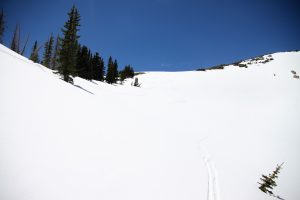 Fun turns down the lower, southern flank of Asgard Ridge before the real suffering started in the trees

It was some grunting, some routefinding, and some cursing, but we eventually made it to the Gore Creek Trail, turned north, and headed to the North Rock Creel TH and our subaru finally arriving around 4:30pm for a 9 hour day. We raced home to relieve Sarah by 5:30pm and see Sawyer, Thatcher, & Kona. What a terrific day with my wife semi-celebrating our 10th Everest summit anniversary, which was the day before, May 25. We feel so lucky and are so grateful we can still do these kinds of days together. Hopefully, this will be the case for many more years and decades to come including adventures and climbs with Sawyer & Thatcher, of course! 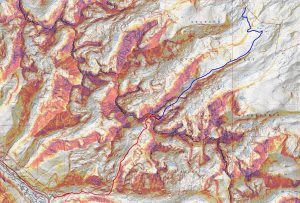 Our up route in red and down route in blue from west to east up and over Mt. Vahalla