Despite being literally less than 10 miles away as the crow flies south of our home in Lake Creek, the 13er Gold Dust Peak (13,365′) is still fairly remote and reclusive and takes some effort to get back there especially when snow is on the ground. I first summitted Gold Dust back in late November 2009 with several good pals and Rainie and Kona. It was a fun day of snowshoeing and cold temps and another good reminder of the time I so cherished with Rainie & Kona in the mountains. 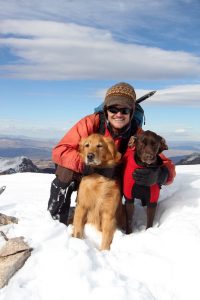 The 2nd time I summitted Gold Dust was a warm August day in 2018 with Natalie Moran and we went on to traverse to “Pika” Peak (13,126′) for a fun half day of scrambling and trail running back to the trailhead to get back home to get Kona and head to work (Kristine & Sawyer had gone back to Maine for the week). 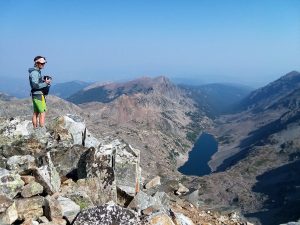 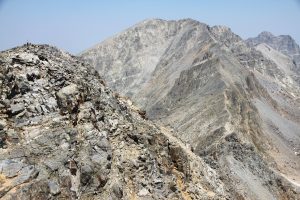 I knew if I wanted to grace its summit for a 3rd time it had to be to ski its awesome-looking north couloir down to New York Lake. This couloir is not easily seen. In fact, you really can’t see it well from many vantage points down in the lower elevations of the Vail Valley and Lake Creek. Actually, the Eagle County Landfill yields a great look at it 🙂 I knew I wanted to climb Gold Dust from the standard Yeoman Park Trailhead and up its southwest face, but the real question came on how to exit from the New York Lake area once down the couloir. We could always reclimb the couloir, but that didn’t sound appealing. I thought of skiing all the way out to the Baryeta Cabins (West Lake Creek) Road and then out the 4 miles to West Lake Creek Trailhead, but that was a LONG out and probably would involve a lot of bushwhacking and route-finding between New York Lake and the Baryeta Cabins Road. In corresponding with my good local pal, Ben Conners, we devised a scheme to regain a saddle to the west and ski out the Nolan Creek Drainage to Forest Service Road 418 at the town of Fulford. Below is the map denoting the route I thought would work and we really stayed pretty true to this route the entire day. 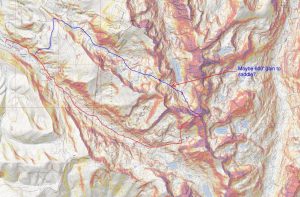 This adventure is yet another spring 2020 COVID trip I am just now writing up. Trying to catch up on writing up some of my favorite adventures. We gathered a good crew including me, Ben, J, Dylan, & Brett and met at the Yeoman Park Trailhead maybe around 4-5 am in early May 2020. We kept skis and boots on our backs for quite a while and many miles up the Brush Creek drainage to Lake Charles. We were mostly able to stay on top of the spring snow in our trail runners which was nice and made for decent time. We lost the trail when the snow started getting deep so just kept navigating east towards Lake Charles. It was getting warmer after a few hours and we eventually switched to ski boots and skinning instead of postholing in the slushy, deep snow. We eventually veered northeast into the Negro Basin drainage and kept going until tree line and popped out in front of Gold Dust’s south face. 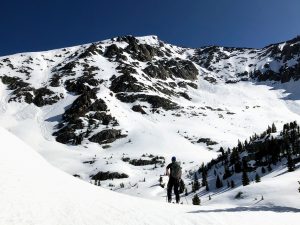 Brett and Gold Dust dead ahead 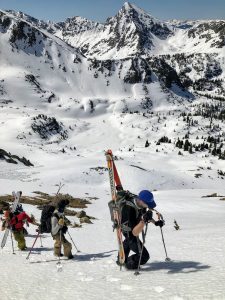 Once we hit the mellow southwest face, it was just a slog to the summit. 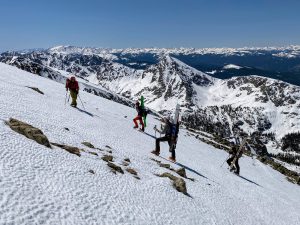 Chatting and enjoying the mellow climb to the summit. The snow was still pretty firm even on the south facing slopes, so we were indeed in no hurry. Photo by Ben 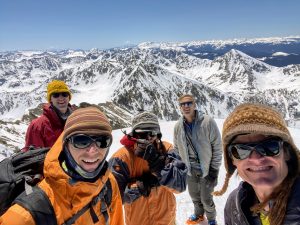 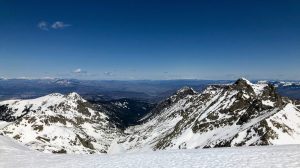 We waited for awhile on the summit and scoped out the traverse east over to the sub-summit from which the north couloir drops away. It didn’t look trivial. And the snow was warming up fast on the traverse so we all decided to at least get over to the sub-summit. I chose to put my skis on my back and traverse by foot. Brett followed my lead. The other boys did a hairy (at least to me and Brett) ski/side-step across. Unlike many of my friends, I am more comfortable on my feet than on skis 🙂 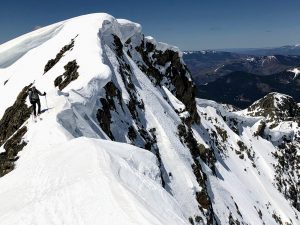 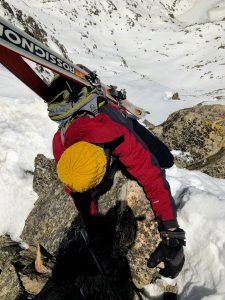 Brett making a few moves on the traverse 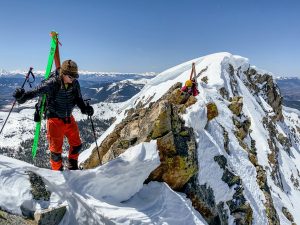 Me coming up to the sub-summit. Photo by Ben 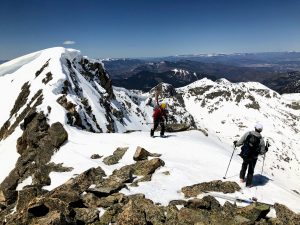 Brett & Dylan on the sub-summit

We scrambled down a bit to the north where the couloir started and found a great looking little cave where we strapped on our skis. The snow still looked pretty darn firm, which did not instill much confidence for me and the tele turn, but J launched forward first and skied it well as always. 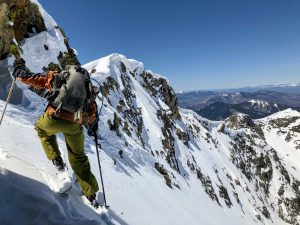 J getting ready to drop 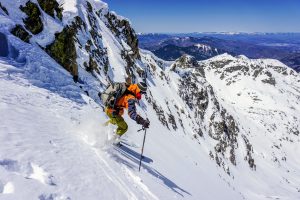 J dropping. He confirmed the snow was indeed “firm” and had yet to soften up. Photo by Ben

We all went one at a time and yes it was firm. Ugh. Dylan exclaimed that his “ears hurt” from the noise of the skis chattering on the hardpacked snow of the couloir. 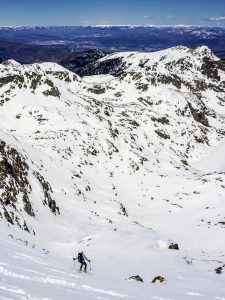 Dylan making the skiing look better than it was. Photo by Ben

Nonetheless, we all made it down lower in the couloir. I think Ben got the best upper couloir turns as he traversed under the north face more which appeared to have better snow: 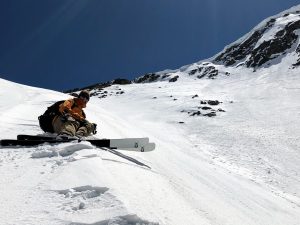 We then skied the lower couloir and the apron. The snow got softer and softer the lower we got and by the time we were out of the couloir you could open it up a bit and enjoy the nice corn snow. 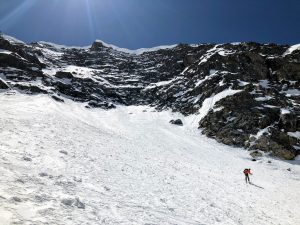 J and the big north face above 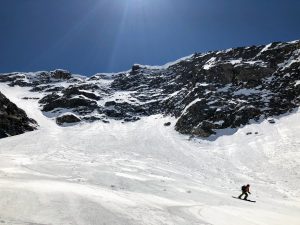 J getting to the corn 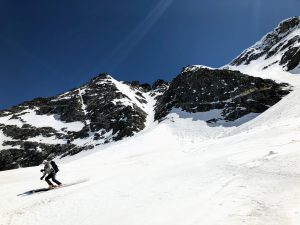 Dylan smiling with the goods 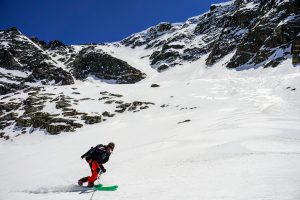 And me enjoying my tele turn with the north couloir behind. Photo by Ben 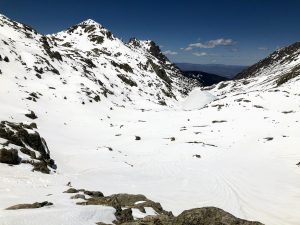 Skiing down to the bench above New York Lake

We regrouped just above New York Lake, drank some water, and donned our skins again and began the skin up to the small saddle we saw just south of Point 12,525′. 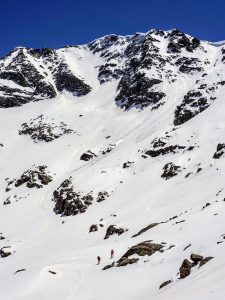 Skinning out with the north couloir in full profile behind. Photo by Ben 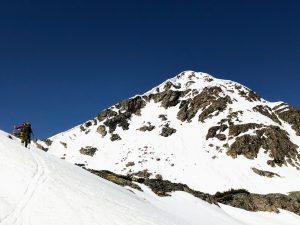 We were thinking about booting up Point 12,525′ and skiing its west face down into the Nolan Creek drainage. However, once we got a view of the west face, there was very little snow so we dispatched of that idea. We booted up the final steep gully to the small pass where we were treated with wonderful views. 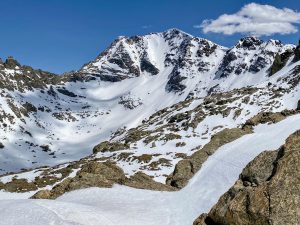 Gold Dust and its north couloir from the small pass. Photo by Ben 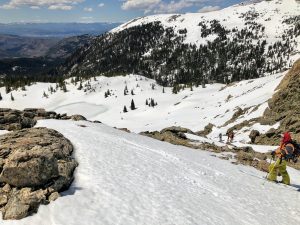 The lengthy ski out the Nolan Creek drainage was really fun and smooth. That is, until we got to the tight forests much lower down. We passed by the frozen Nolan Lake and Craig Peak and eventually found the Newcomer Spring trail just before running into FS 418. It was hot and a bit slow with the slush but we eventually made it out to Yeoman Park Trailhead and the cars around 4pm. After enjoying a beer sitting around the cars reminiscing on the day, we all took off back home. All in all, it was a phenomenal day and I’m super happy our loop worked out pretty well. Obviously, I wish the couloir had softened up more, but in all honestly it probably didn’t warm up until 4pm the way the sun hits it at that time of year. Beggers can’t be choosers!