Well, after an unsuccessful attempt to ski the so-called “Deming Drop” on Deming Mountain (12,902′) in the southern Gore last June, we decided to give it another go this April despite a not so ideal forecast for a Saturday. It looked sunny in the morning, but the winds were forecasted to be pretty gusty and a storm was a brewing that afternoon and evening. Last June 2016, Derek, Mikey, and I (along with K9 companions Kona and Maude) waited almost an hour and a half for the north couloir of Deming Mountain, aka the “Deming Drop”, to soften up, but it really wouldn’t have till high noon or after. Plus, we decided it wasn’t a good line for the dogs either. So, we decided to play it safe and ski the fun east slopes.

Leaving Kona and Maude at home this time, J and I met Derek at the Meadowcreek Trailhead in Frisco around 5am. He kept our trail shoes on for maybe a mile before we switched to skinning mode and had an enjoyable skin up through treeline to the beautiful, mellow basin below Eccles Pass. However, the wind was gusting pretty substantially when we got into the open blowing us back a bit. J and I were sort of thinking if it were this windy down here, we may not be making the summit today 🙂 Nonetheless, we skinned our way up Deming’s familiar east slopes and the wind seemed to settle down a bit the higher we ascended. We topped out around 4 hours after leaving the trailhead at 9:15am. 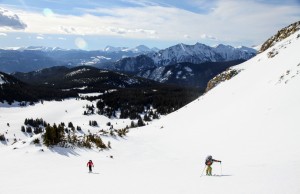 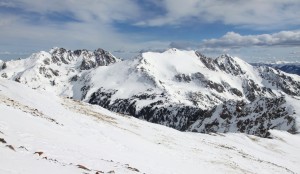 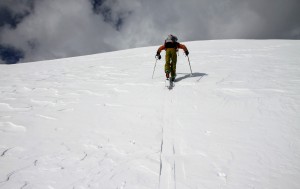 J topping out on Deming

We couldn’t believe the wind allowed us fairly easy passage to the summit. After maybe 15min on top, the wind, however, picked up and we decided to move. 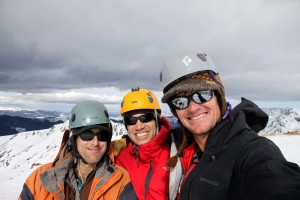 We skied north over the flat summit plateau to the couloir’s steep 50 degree entrance. The steep entrance was definitely bulging out convexly indicating some definite wind loading. This was surely intimidating and gave us pause.

J and I scoping out the couloir’s entrance. photo by Derek

However, J noticed we could avoid this convex entrance to the couloir by skiing down the small ridge to skier’s left and then traverse under the loaded slope very fast to the couloir’s much safer right side. Yes, we would be under the bulging, upper slope, but only for a brief second and individually. 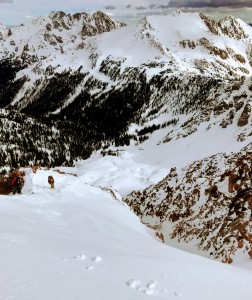 J and I making our way down the ridge to avoid skiing over the steep, bulging slope. Photo by Derek

Then, J crossed the couloir over to the right side, followed by me, and then Derek. With no signs of any snow instability, we continued to ski the now mellower 40 degree couloir in very variable wind-affected snow.

Derek traversing the steep, upper slope over to J and I on the couloir’s right side

Well, I guess I can say I skied the Deming Drop, but it sure wasn’t pretty 🙂 This was some of the hardest skiing I’ve ever done in terms of physical exertion. Of course, I made zero telemark turns because of how so variable the snow in the couloir was. It was all I could do to make a normal alpine turn! And, I had a hunch it would be spring north-facing, creamy powder. Haha…yeah right! J and Derek were patient with me. So, to show how variable the snow was, J lost one of his skis in the upper portion of the couloir (though he obviously recovered it) and J can ski anything, anywhere with anyone. The snow basically just ripped the ski off his boot. Nonetheless, we made it down the belly of the beast to the apron about an hour after leaving the summit. 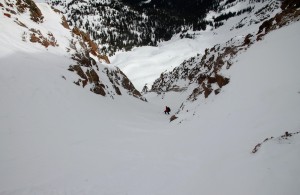 Close-up of Derek working for those turns 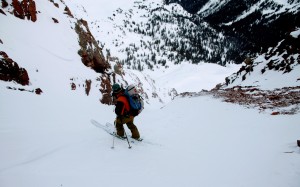 J about a third of the way down 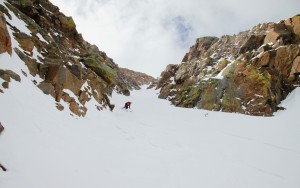 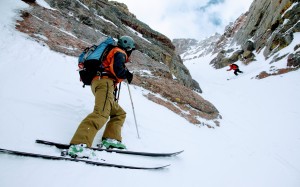 Looking up at Derek through the couloir’s choke

Me doing my best in the tough snow. Photo by J 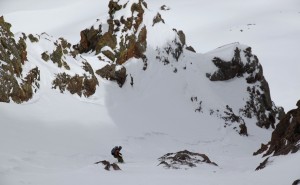 J finishing out the bottom section of the Drop 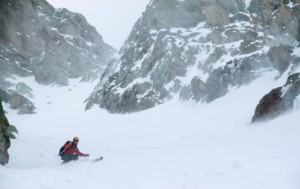 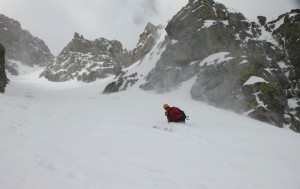 Upon reaching the apron, we traversed northeast towards Red Buffalo Pass and found the steep slope we were to climb up to reach Deming’s northeast ridge. 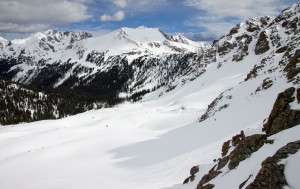 We packed our skis on our backs and J and I broke trail straight up through some really deep and tiring snow. We leapfrogged setting the booter and an hour later when we reached the ridge, we were pretty exhausted. 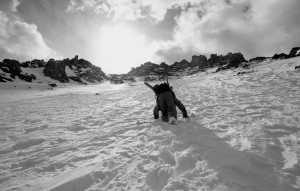 J climbing up the slope 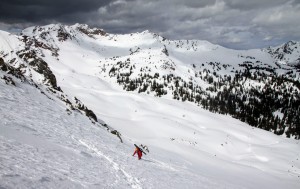 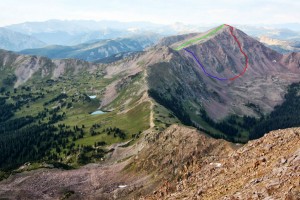 A look at our route from the summit of Red Peak to the north in July 2015 after J and I traversed Red Diamond Ridge. Green indicates the skin up Deming’s east slopes, red indicates the ski down the Deming Drop, and blue indicates our climb back up to Deming’s northeast ridge after the ski

After a snack and some hydration in the ever-increasing wind on the exposed ridge, we decided to ski down the utterly horrific breakable crust into the Meadowcreek drainage. This was the worst part of the day for me. The snow was just plain “break your leg” snow as the sun had since went away behind the increasing clouds and what corn snow was trying to surface froze up quickly. We saw a huge 17 person crew skinning up to Eccles Pass and beyond up the west ridge of the small bump that eventually leads towards Buffalo Mountain. We were all curious if this was a backcountry ski course or what. Who knows – maybe just a large gathering of friends. All said and done, we finally reached corn snow lower down in the drainage and skied it out to within a half mile of the car making for a 7.5 hour RT day. I believe this route is around 12 miles RT with between 4,500 – 5,000′ vertical gain. Definitely a fun adventure and happy to have skied the Deming Drop, but boy those snow conditions – I do not miss that. However, that’s spring skiing for ya. You never know what you are gonna get. You can guess and have a good hunch, but until you feel it out and experience the snow conditions in real time, you don’t know for sure.