I’ve been a fan of Norse mythology for awhile now and everyone knows I’m a Gore fanatic. When J and I climbed the intimidating northern of the two east ridges called Asgard Ridge up Mt. Valhalla over two years ago, we always gazed upon the lower 12,000′ towers to our left while ascending Asgard. These towers are called Freya and Thor. There is a tower further on up the southern of the two east ridges of Valhalla called Loki, but honestly didn’t look nearly as interesting as Freya & Thor. I figure the next time we are up on Valhalla’s summit, we can go check Loki out. But, Freya & Thor looked like the real prizes in the basin in addition to the obvious Asgard Ridge. The veteran Gore hardman Stan Wagon from Silverthorne details his climb up Thor on his website and pioneered a one pitch 5.6 route up from the west col to Thor’s summit. Stan also details his west ridge climb/traverse up to Freya’s summit on his website as well. Stan gave me some approach beta on the simplest route to these towers via the Rock Creek TH north of Silverthorne. J and I approached Asgard Ridge via Boss Mine and some steep and pretty intense bushwhacking. I think the better approach to Asgard Ridge proper is to leave the Gore Range Trail and bushwhack south-southwest for a few miles outlined in the route marked below:

While Ryan, Mike, and I were targeting Capitol’s NW Buttress route on this spectacular fall day, 3 people on such a serious route with potential rockfall just didn’t seem like a good idea. So, I dug around in my mind for an alternate adventure and remembered these towers deep in the Gore at the head of South Rock Creek Basin. I was excited to get back in there for a visit. Mike needed a big day back in the mountains and it was a treat for Ryan and I to get out together in the Gore with a rack and a rope and see what we could do. We all met at the Rock Creek TH late Friday night and left the TH by 6:30am Saturday morning headed south on the Gore Range trail. We had Ryan’s 70m/8.4mm rope, an alpine rack, set of nuts, draws, and plenty of slings and biners. However, we did choose to leave behind the rock shoes in favor for just our approach shoes. I can tell you next time I will definitely be bringing rock shoes. It was not too bad bushwhacking at all for a few miles up to the grassy meadow slopes on the south side of Asgard Ridge. We descended a few hundred feet down loose rock into a small basin at 11,600′ called Asgard Meadows: a beautiful grassy/bouldery meadow-like basin with a creek running through it and granite towers rising above. It was perfect.

Ryan shooting me shooting South Rock Creek Basin and Freya & Thor Towers still a distance away on the far right in the picture. Photo by Ryan

Freya Tower is down low on the left. Thor Tower is in the center of the picture. Mt. Valhalla is the high summit

I do look forward to coming back to Asgard Meadows and setting up a basecamp to do a full day or two of alpine rock climbing. We were debating on what to attempt first as it was only 9:15am. I told Ryan & Mike Freya’s east ridge direct looked mighty tempting and that I’d like to give it a shot. Based on no prior information that I could find on the east ridge itself and in talking with Stan, we were not sure it had been climbed before. But, it looked doable even in approach shoes – we hoped.

Looking up Freya’s east ridge from the base 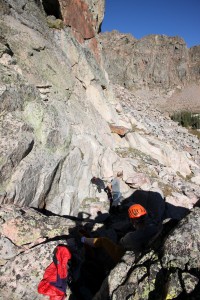 It looked like we could scramble up 50′ of 4th/low 5th class rock or so into a southeast facing dihedral, which seemed like it lent feasible passage up to perhaps a small ledge 80′ above.

Ryan on the initial scrambling

I started up a crack system on south-facing rock east of the dihedral and soon realized I would prefer the comfort of a rope especially with approach shoes. It was getting into mid-5th class with big exposure. I downclimbed 15′ back to a small ledge and we roped up. I took off up our 1st roped pitch. It was indeed a pretty awesome pitch and after a 5.8 move on the face I made my way into the dihedral and definitely pulled a 5.8 move or two up to the small grassy ledge. I placed mostly nuts but a cam at each of the two cruxes. I set up an anchor system at a convenient grass ledge and brought Mikey and Ryan up to me all the while I scoped out how pitch 2 would go above me.

Me into the dihedral on pitch 1. Photo by Ryan

Ryan took the lead on pitch 2 up a 5.8 corner to the right. I hoped in the back of my mind that it went somewhere because it looked to be our only option with some protection to be had. He did awesome and found a nice belay ledge at the base of another headwall above to belay us up. 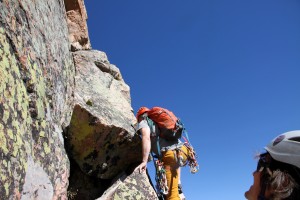 Ryan setting off up pitch 2

I thought this was a cool picture: my head, Ryan’s feet. The grassy meadows on Asgard Ridge’s south side we used on the approach can be seen in the background 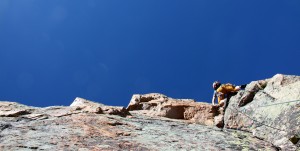 Ryan climbing the right-angling crack into the unknown

I took the 3rd pitch lead which began with a funky unprotected stemming chimney for 25′ to a small ledge. I then balanced my way onto a very small corner on the right and was able to get a small Alien into a small pocket, but it definitely wasn’t reassuring. However, there were no other options. I then made a committing face climb move or two to the left and got a good jug and stance in order to get a much better #1 cam into a solid crack. It was then fun 5.6 climbing up to the top of the headwall and I built an anchor to bring the fellas up.

Mikey climbing the headwall up to me on pitch 3. Photo by Ryan 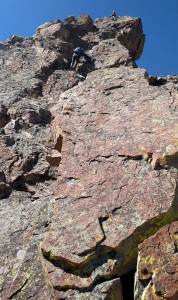 Another view by Ryan. The stemming chimney is immediately behind the large slab of rock in the foreground 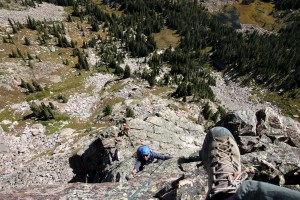 Mikey on pitch 3 with Ryan below

I belayed Mikey around the small tower I sat upon for the pitch 3 belay to a very small col just west of me. I lowered Ryan down to this same col and then after gathering my anchor gear, I downclimbed the 15′ to the saddle. We all scrambled up another 100′ to the base of our pitch 4. It looked to be a nice angling hand crack and Ryan took the reins.

Ryan coiling the rope after pitch 3

The scramble up to pitch 4

Me belaying Ryan on pitch 4

Ryan getting into the meat of pitch 4

I think we agreed there were some 5.8 moves on this hand crack 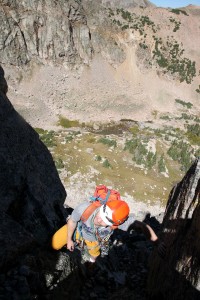 Mikey almost there. It had been awhile since Mikey had scrambled, so he was back in the game by this point

Looking down Freya’s east ridge from the summit

Well, whether someone had climbed the east ridge before or not, just not having any prior beta or even knowledge that it would go was exciting in itself. Plus, it was a solid 4 pitch alpine route on granite in a spectacular setting. Hard to beat. Here is a route overview of our route: 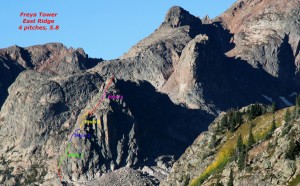 What was almost equally as fun and exciting as our east ridge route up Freya was the descent down Freya’s standard “west ridge” to the Freya/Thor col. This is the route Stan Wagon and his partners climbed in 2010 rating the one crux move at 5.6. We didn’t rope up for this ridge, but it sure was some awesomely exposed scrambling. Makes Capitol’s standard knife-edge look like a catwalk and not very exciting. This was the best scrambling of the day by far. 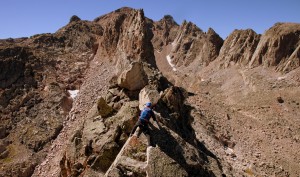 Mike and I approaching the knife-edge portion. Photo by Ryan 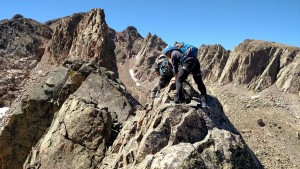 Such a great ridge 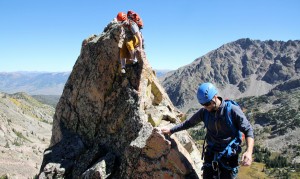 Mike on a very exposed downclimb

Ryan at the same spot 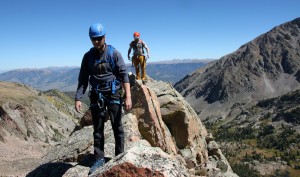 One final climb up on the west ridge 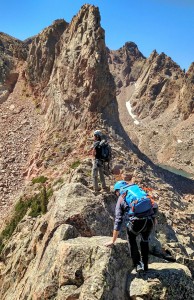 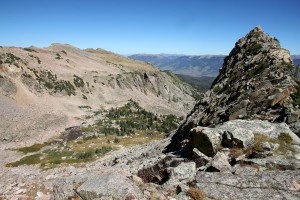 Looking back with Asgard Meadows down to the left

We took a well-earned break at the Freya/Thor col for a PB&J and some Gatorade. I am not sure what time it was, but maybe between 12-1pm. Anyway, we decided to go for Thor Tower as well. We took Stan’s route up the loose southeast-facing couloir to the saddle west of Thor’s summit. What really excited me about coming back to this area were some of the seemingly solid 300′ crack routes on Thor’s south face visible on our approach up the couloir. Rock shoes and a bigger rack are a must on the next trip.

This large dihedral on Thor’s south face was especially interesting 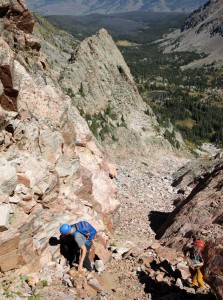 Climbing up Thor’s southeast couloir. Freya’s west ridge can be seen behind

Then, we traversed north along ledges to Stan’s 5.6 crack route. Ryan decided to scope out a different route to the right (south) of Stan’s route and described it as an airy 5.4 pitch. I tagged the rope on my harness and climbed Stan’s 5.6 crack, found his old webbing and rap ring at the top, and belayed Mikey up to me. 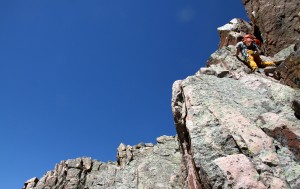 Ryan on his airy route 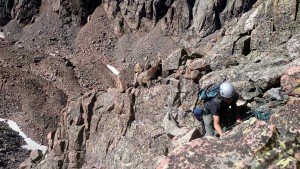 Me belaying Mike up. Photo by Ryan 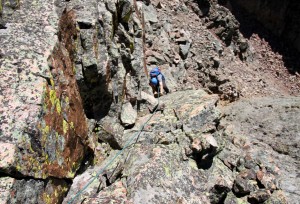 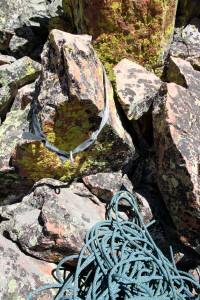 Stan’s old webbing and rap ring. Ryan added another piece of webbing through the rap ring.

It was then easy scrambling to the summit where we saw Stan’s cairn and small glass jar with his card in it. 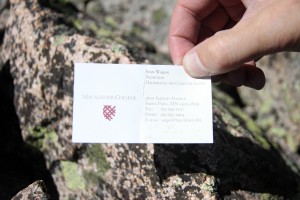 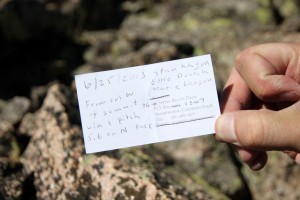 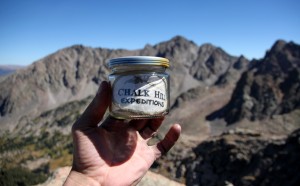 As I didn’t have a pen, I added a patch off of my pack. Its a made-up “Expedition” name my dad thought up just for fun as our mountain cabin in NC is called Chalk Hill 🙂 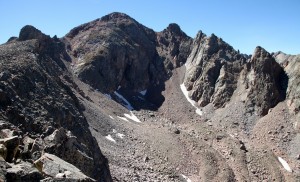 The east amphitheater of Mt. Valhalla from Thor’s summit 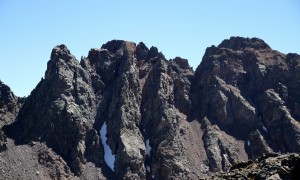 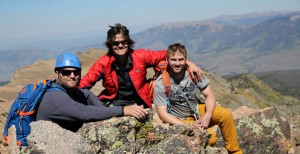 We stayed on the summit for a good 20-30 minutes and enjoyed the wonderful views and weather. 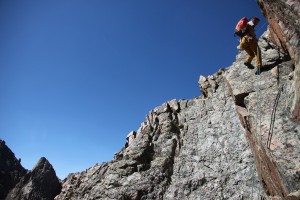 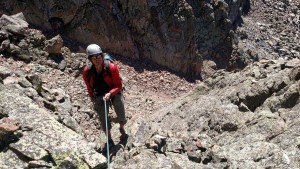 We descended down the other side of Thor’s west col towards the beautiful lake at about 11,900′. While loose in spots, it wasn’t too bad at all. Then, we continued to descend another 300′ of boulders back down into Asgard Meadows. 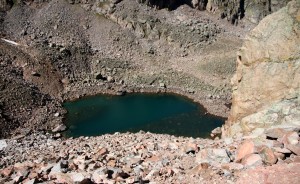 The small lake at 11,900′ between Asgard Ridge and Thor Tower

Back in Asgard Meadows

Ryan spotted this northwest buttress on Rain Peak across the valley. Maybe a future climb

We refilled with water and relaxed for a bit. It was 3pm now and we (at least me) should be probably heading on out. We reascended 300′ or so back up the scree/boulder slopes to the grassy meadows along Asgard Ridge’s southern flanks and cruised on home arriving back to the trailhead by 5:30pm for an 11 hour RT day. Thanks to Ryan & Mike for helping to make this day one of my most memorable Gore adventures in a long time. 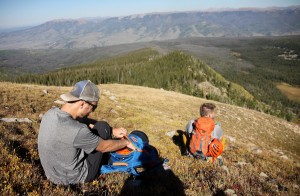