Keller Mountain is one of the prominent peaks of the Gore Range and has a really fun and enjoyable class 3 scramble up its east ridge.This route & peak had been on my tick-list for awhile and is even featured in David Cooper’s Colorado Scrambles book. As Kristine and I had our friends Brett & Maura’s wedding in Parker (south Denver) last Saturday evening, we decided to check out Keller Mountain on the way down. Reid Jennings also joined us for the climb. I believe we set off up the North Rock Creek trail around 7am and made speedy time up to the Boss Mine at 2.2 miles. We then steeply climbed up the mine ruins over dirt, talus, and an occasional trail to reach the treed east ridge. Breaking through treeline, we then saw the beginning of the boulder-strewn slope leading up to the first point along the east ridge. 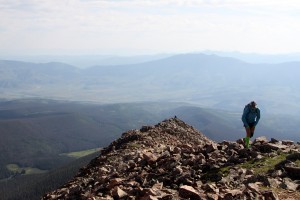 We passed a team or two on the way up and began the fun class 3 scrambling along Keller’s east ridge up and over Point 12,847′, a sub-summit of Keller, and then on along to Keller’s true summit. 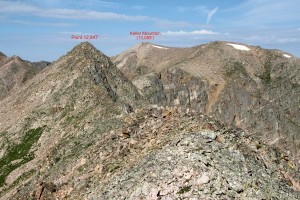 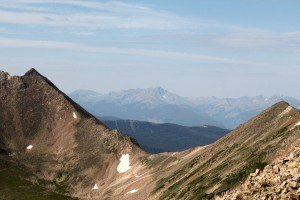 Mt. of the Holy Cross framed by North Traverse Peak (left) and the end point of the Keller Mtn Ridge, Point 12,860′ (right). We ended up reaching the saddle between these two peaks and descending back into the North Rock Creek drainage 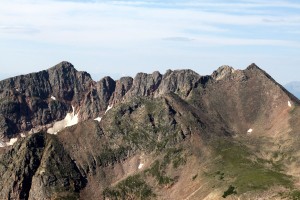 I think any of us would highly recommend this east ridge route to folks who are looking for a fun and enjoyable class 3 scramble in the Gores. We pretty much stayed ridge-proper the entire time, which maybe had a class 4 move here and there, but one can definitely keep it at class 3 by slightly dropping to either side of the ridge crest. 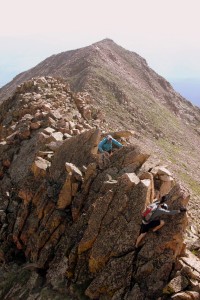 Scrambling with other climbers on Point 12,847′ behind 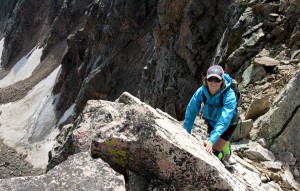 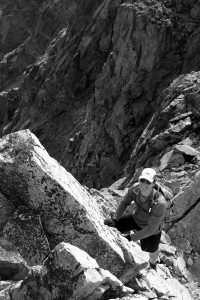 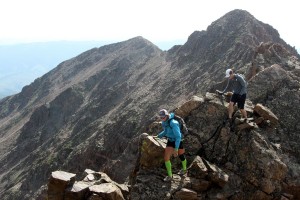 Along the east ridge

Another downclimb on the east ridge proper

We then topped out around 10am on Keller’s summit and enjoyed the views. 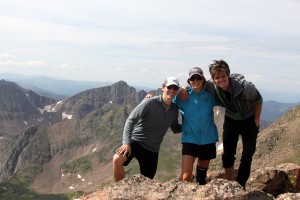 Instead of backtracking the east ridge, we decided to continue on along the ridge towards the southwest over a few more unranked & unnamed summits. It was a fun scramble over to Point 13,055′ and then further on over class 3/4 rock to the lower Point 12,860′ from which we dropped down to the saddle with North Traverse Peak, the northern terminus of the Gore Grand Traverse. 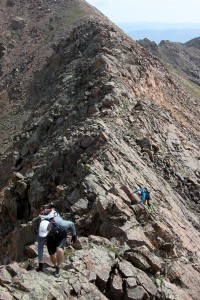 Reid & Kristine along the ridge to Point 13,055′ with Keller’s summit behind 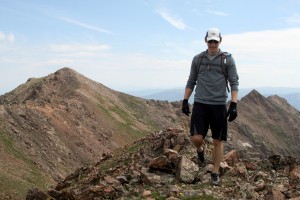 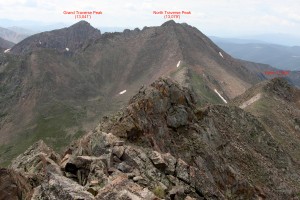 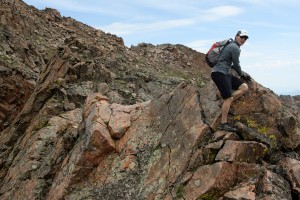 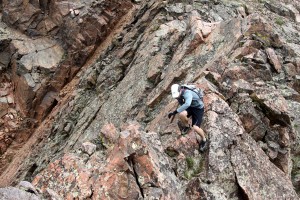 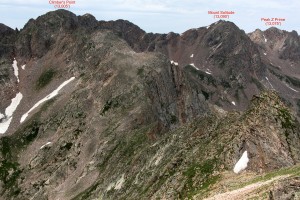 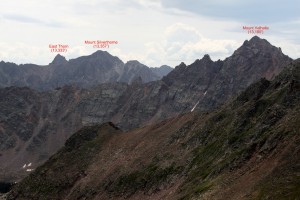 We then figured we could drop into the North Rock Creek drainage from the saddle and make our way bushwhacking through the thick willows and forests once we got below treeline. We passed an isolated lake right at treeline in the upper basin which was gorgeous. 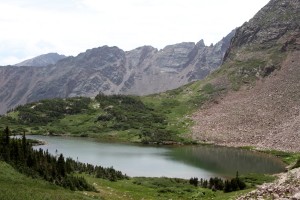 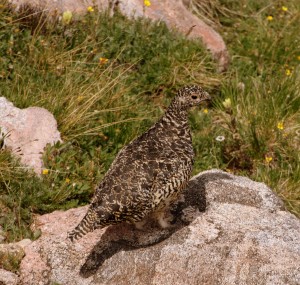 However, the bushwhacking that ensued through the willows exceeded our expectations and not for the better. The willows were so thick we were stepping on branches and not even earth. I was actually getting a bit concerned with our timing with regards to making the wedding if we didn’t come upon some sort of a trail. As fortune would have it, we got through the willows, dropped down to a boulder field, and fortunately found a cairned faint trail leading the direction we wanted to go. Another hour along this faint trail got us to the Boss Mine from where we continued on the North Rock Creek Trail back to the cars arriving around 2:30pm. I feel fortunate we found that faint trail in the North Rock Creek drainage because with anymore bushwhacking, we would have likely not made the wedding. I think we all enjoyed making the Keller Mountain climb a loop and extending the ridge traverse all the way to the saddle with North Traverse Peak. It was a fun outing. Total stats was approximately 12.5 miles and 7.5 hrs roundtrip with maybe 4,300′ of elevation gain. And, we made the wedding just fine.