Kristine, the dogs, and myself had hiked the high centennial 13er Mt. Silverheels (13,822′) in the fall of 2013 from Colorado Highway 9. However, when Ben & Brian suggested we climb the lengthy east ridge and ski the elusive southeast gully, I was on board to check out this less explored side to the mighty Silverheels. Mike and I met Ben, Brian, & Dillon in the crossroads town of Como at 8am off Highway 285 and proceeded up the Boreas Pass dirt road and basically parked on the side of this road adjacent Tarryall Creek. We could see the east ridge of Silverheels miles away and what looked like a decent drainage in which to access the ridge. Now, we knew the route information on this side of the mountain was limited and that the approximate RT mileage was around 10 miles with maybe 3,500′ vertical gain, but the day turned out to be a bit more of an adventure than we had expected with a bit more vertical and mileage. Not that we all don’t like vertical and mileage and some route finding, it was just slightly more of an adventurous day than we had initially thought. Plus, Ben, Brian, & Dillon were rolling in that morning on fumes having just driven all the way to Taos, NM the day before to climb and ski the highest peak in New Mexico, Wheeler Peak. After we were literally 1 minute from the cars and into the skin, we had to cross Tarryall Creek. Nothing that a little shot-putting of skis across the creek and tiptoeing across rocks couldn’t take care of, though. We skinned up the South Tarryall Creek drainage past several frozen ponds and entered the woods. It took a bit of route finding and bushwhacking to eventually get our bearing and head for the steep treed slope which would eventually dump us out on the east ridge proper right at treeline at around 11,500′. After a few hours in the woods, it certainly was nice to get above treeline so that we could actually see where we were going and see our intended ski line. 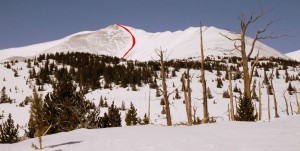 The view from treeline of our east ridge ascent route and its numerous bumps along the right skyline. Our ski line down the southeast gully is in red

The sun was out and the skies were bluebird. The only disappointment was the number of bumps along the east ridge we would have to go up and over. It was about 2.5 miles to the summit along the extensive east ridge with lots of vertical gain and loss. We could also see the wind whipping across the ridge and creating small vortices of snow. Our good fortune with no wind would only last so long this day as it typically does up high on winter summits. 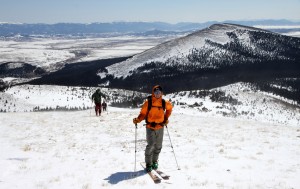 The boys skinning up the lower portion of the east ridge with Little Baldy Mountain (12,142′) behind 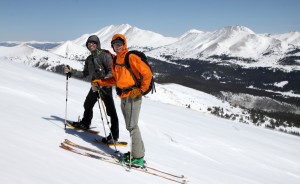 Ben & Dillon with Bald Mountain (left) and Boreas Mountain (right) to the north. Mt. Guyot is dead center in the distance

Ben on the east ridge 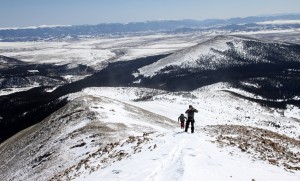 Getting higher on the east ridge 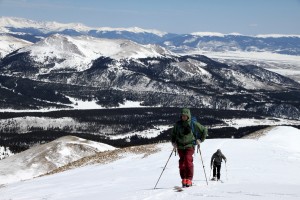 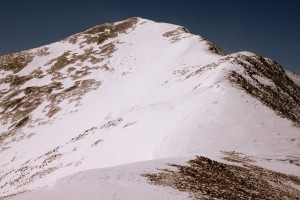 Ben and crew behind him 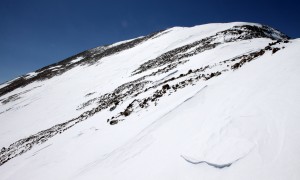 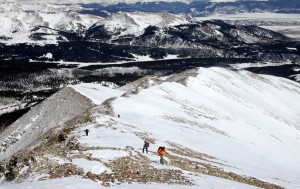 The long east ridge of Silverheels

The skin up the east ridge was long and arduous, especially with the wind, but we all eventually made it to the top of the southeast gully, which turned out to be yet another bump along the ridge. The true summit of Silverheels was still yet another few hundred yards away to the southwest. That wasn’t the concern. The concern was the ferocious wind whipping across the ridge and at the summit. However, Ben, Dillon, and I continued onto the summit sometimes bracing ourselves as to not get blown off the ridge. It was some of the more intense wind I can remember in a long time. Gusts between 50-60 mph were not out of the question. 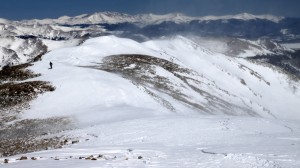 Dillon on his way over to the summit 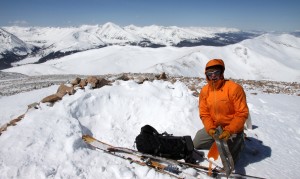 Ben de-skinning and getting ready to ski. As you can see it was a gorgeous day despite the wind

Quandary Peak looking caked with snow from the summit of Mt. Silverheels

Anyway, we topped out, took a few pics, and boogied back to the top of the southeast gully as quick as possible to join up with Brian & Mike. Ben skied the ridge, I skinned it, and Dillon was on his snowshoes. We quickly threw our skins in our bag, strapped into our skis, and started our way down the southeast gully skiing one at a time safe zone to safe zone. Dillon used the east ridge as his descent route since he was snowshoeing. Right away we realized the snow was absolutely bulletproof and would take an earthquake to shake it loose, which was great from an avalanche perspective. What was awful from a  skier’s perspective was the breakable wind slab crust intermixed with bulletproof ice. It was probably the worst ski descent I have ever experienced, especially being on my telemark skis. I think everyone else agreed as well, though Ben & Brian said it was their second worst ski descent and these guys have no shortage of ski descents. I was just very careful and deliberate with my turns and mindful as to not break my leg or tear my ACL or something worse.

Brian and the long southeast gully descent ahead of him

Ben starting his way down 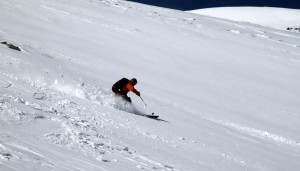 Ben making it look better than it was. Notice the wind slab snow in his wake

Ben & Brian with a beautiful backdrop 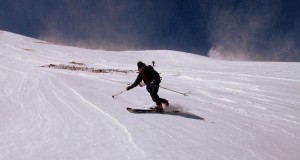 Me doing my best to make a tele turn without breaking my leg. Photo by Ben 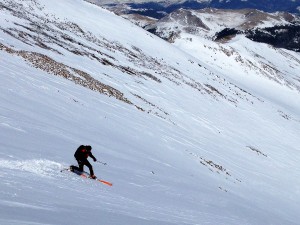 Me skiing the southeast gully. Photo by Ben

I think we were all happy to escape that ski descent without incident or injury. However, in looking at the 2,500′ gully from afar, I realized how fun of a ski it truly would be in spring corn conditions. We then veered northeast and traversed a ways until we had to start the uphill climb back to the east ridge proper to rejoin our ascent route. 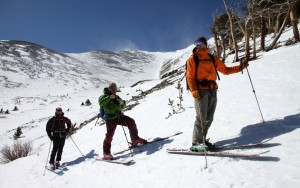 Left to right: Mike, Brian, & Ben with the southeast gully behind 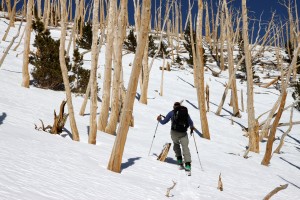 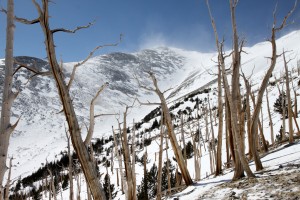 The burned tree area made for beautiful pics, though

After regaining approximately 500′, we all took a break at treeline on the ridge, I finished my PB&J and drank some water, and we all gathered ourselves for the remaining ski descent through tight trees. 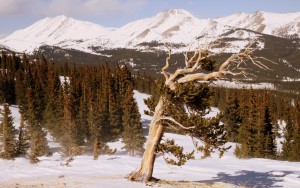 The descent took awhile and many thanks to Ben & Brian for waiting for Mike and myself. I know we slowed you guys down. It was 3pm now and we had to find our ascent route. After a bit of wandering in the woods, we finally found our tracks and skied the rest of the way down the steep treed slope following our ascent route. We then took a hard left and took the South Tarryall Creek drainage all the way back to the Tarryall Creek crossing and finally our cars on Boreas Pass Road finally arriving back at our cars around 5pm for a 8.5 hour RT day. Dillon, of course, beat us back to the cars. We all thought the total mileage was more like 11-12 miles (rather than 10 miles) and including all eight bumps along the east ridge and our 500′ re-ascent of the east ridge the total vertical gain was probably more like 4,500′. Whatever the totals, it was a longer day than expected though fun all the same. The winds intensified throughout the day and Silverheels looked like it was getting hammered in the fading daylight by the time we reached the cars. 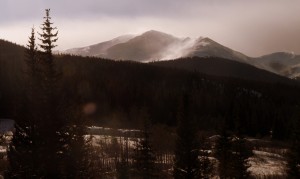 Silverheels from the east along Boreas Pass Road

A fun day out with a great crew, though it may be awhile before I venture up Silverheels again.