It had been awhile since the Chalks had tagged a state high point and with my friends’ Ben Conners, Brian Miller, and Dillon Sarnelli’s recent trip down to climb and ski New Mexico’s highest peak, Wheeler Peak (13,161′), Kristine and I were motivated to give this peak a shot and get out of Colorado for a brief stint. What was extra special was that Wheeler Peak was a mountain we could take Rainier on since the route was relatively short (around 7 miles) and only about 3,000′ of vertical gain. We felt Wheeler was something the 11 1/2 year old Rainier could still do and have a ball on. We planned to do this Wheeler Peak trip a week prior, but the weather thwarted us and we postponed it to last weekend. The weather last Saturday turned out to be absolutely stellar bluebird skies with warm sunshine the entire day. Wheeler Peak is in the southern Sangre de Cristo range, which extends down from Colorado and is located near the Taos Ski Valley about a 30 minute drive from the actual town of Taos. My family had visited the state of New Mexico including Taos and Taso Ski Valley probably 20 years ago or more and I had not been back since. I still remember that day when my family went sledding on the lower ski slopes of Taos Ski Valley. Kristine had never been there. Taos Ski Valley is a quaint little ski resort in the heart of the southern Sangres and about a 5 hour drive due south of Vail. 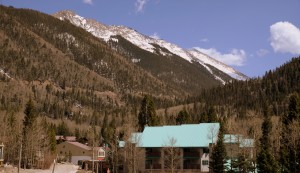 While this southern end of the Sangres doesn’t typically get the snow Colorado gets nor the cold temperatures, we were hoping we could still skin and ski most of the mountain. We arrived at the Williams Lake trailhead parking lot around 8:30pm Friday evening and set up camp in the back of the Tahoe. This trailhead is about 1,000′ above Taos Ski Valley up a rougher 2WD dirt road. We woke up around 6:30am and got going on the dirt trail in our trail runners with skis/boots on our packs around 7:30am. It was a bit chilly to start out yet warmed up quickly. We soon hit continuous snow on the Williams Lake trail after passing the Bavarian Restaurant and then the bottom of a chairlift and were able to put the skis on our feet and skin on up the well-broken trail. This trail proceeded for about 2 miles slowly gaining altitude towards Willams Lake. 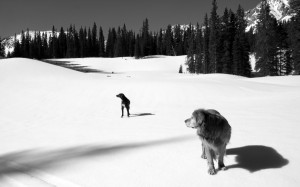 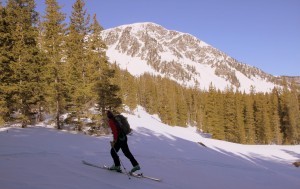 We then took a hard left up into the steep treed terrain at a sign on a fence post/tree trunk before Williams Lake towards Wheeler Peak. We followed the semi-broken trail through the woods using the blue dots on the trees as trail marker. Yet, when the blue dots started leading us back downhill seemingly towards Williams Lake, we continued uphill and found a nice open chute leading us above treeline in the direction we needed to go towards the Wheeler Peak/Mt. Walter saddle. 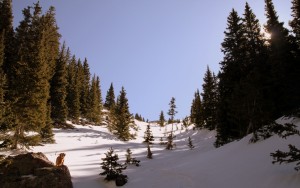 Rainier on a rock showing us the way up the chute 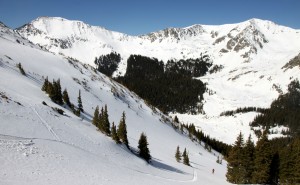 The terrain really opened up above treeline and the views west across the valley to Lake Fork and Kachina Peaks were gorgeous. There was an old snowboard track down the gully and I was thinking in a few hours this chute would make for some nice corn skiing. We kept on skinning up the west face of the Wheeler Peak/Mt. Walter ridge. 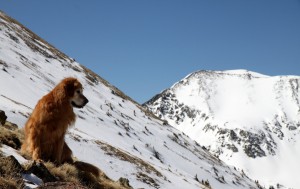 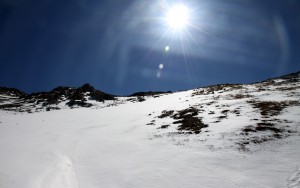 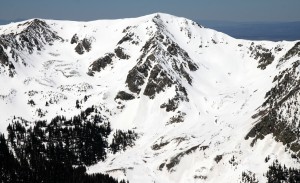 Great ski-mountaineering potential on Lake Fork Peak to the west. We could see several ski tracks coming off this peak’s slopes

Kristine was having some difficulties with her skins on the rock hard snow and so left her ski setup at around 12,500′ and booted from there.

I kept skinning another few hundred feet but ended up leaving my skis where the snow ended just below the Wheeler Peak/Mt. Walter saddle. We finally hit the saddle and made our way up the mellow summit ridge of Wheeler Peak. 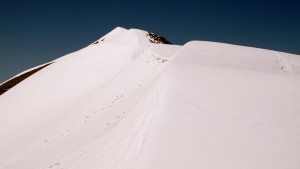 Wheeler Peak summit ridge as seen from the saddle 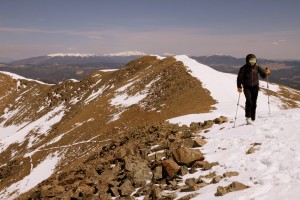 The views were amazing and we topped out on New Mexico’s highest peak around 11am. The west face still had some softening up to do, so all we had was time. We hung out on the summit for 15 minutes or so and took pictures and had something to eat and drink. 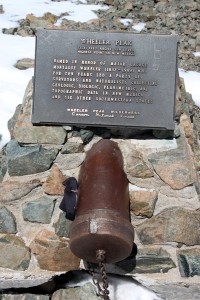 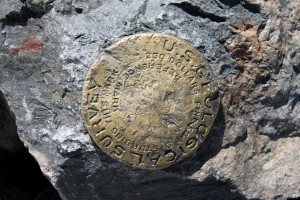 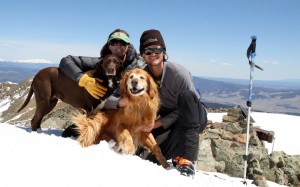 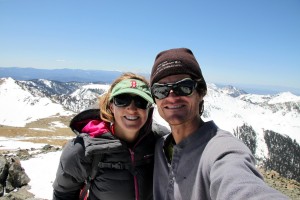 Kristine & I on top of New Mexico 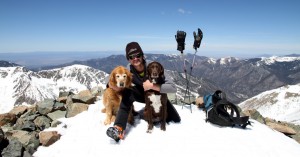 Me, Rainier, & Kona on the summit of Wheeler Peak. Very special for Kristine and myself to be able to bring these two on this little roadtrip

View to the north to Mt. Walter and Point 13,045′ from Wheeler’s summit 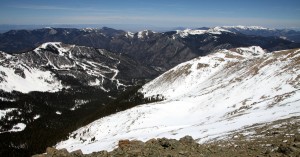 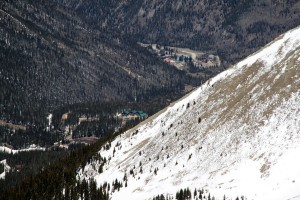 Taos Ski Valley 4,000′ below on a zoomed-in shot from Wheeler’s summit

Upon reaching the saddle on the descent, we realized the snow may need a bit more time to warm up. While Kristine descended to her skis to eat a PB&J and lounge in the sun, the dogs and I headed on up for a mellow ridge run over Mt. Walter’s summit to Point 13,045′ to get a glance down into the northern La Cal Basin, which wasn’t as snowy as I suspected. It was actually fairly dry for several hundred vertical feet off the north side of Point 13,045′.

The dogs and Mt. Walter

Rainier did wonderful and just kept plugging away on regaining Mt. Walter’s summit on the return trip. Mt. Walter is really just a sub-summit of Wheeler Peak, but is considered the second highest peak in New Mexico. 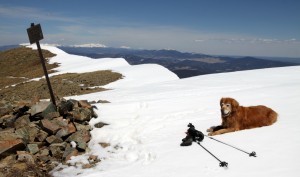 Rainier lounging on the summit of Mt. Walter 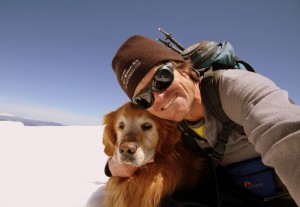 The three of us then descended to my skis and skied nice snow back down to Kristine. I had my PB&J and we then clicked in and skied wonderful corn back down through the access chute, the woods, and finally back down to the Williams Lake trail. We stopped every 10 or so turns for Rainier’s sake, but man she did so well keeping up and persevering. I was very proud of her.

I never have many ski shots of myself, so Kristine was nice enough to take a few 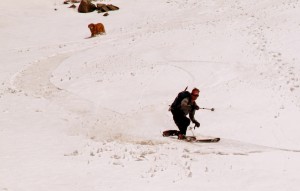 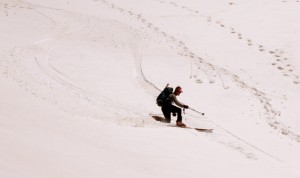 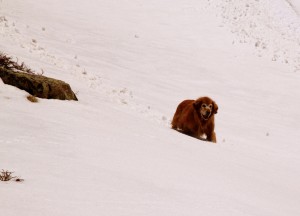 Rainier making her way down after me

We then took it slow down the Williams Lake trail and arrived back at the Tahoe around 2pm. We thought about heading into the town of Taos, but instead decided to get on the road and head back to Vail. We stopped by the sledding hill at the bottom of the ski runs in Taos Ski Valley proper where my family sledded together some 20+ years ago. It brought back some great memories. 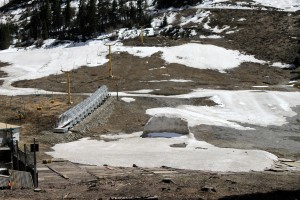 With some passed out dogs in the back of the Tahoe, we made our way home but only after some awesome Mexican food at Casa del Sol in Buena Vista – my favorite. It was a wonderful day with Kristine and the dogs up on New Mexico’s highest peak and is always exciting to explore some new ground.