Been awhile since I posted anything, but the boys and I had a superb day up on a tower in Castle Valley, Utah near Moab two weekends ago that I thought I would share. The weather has been just so amazing this fall – warm days and cool nights with very little precipitation. Perfect for rock climbing and, in particular, desert crack climbing. J and I had been climbing when we could at Wolcott and doing a few days down in Grand Junction at Tiara Rado. I had always wanted to climb Sister Superior Tower’s classic Jah Man route which goes at 5.10c. It looked like an amazingly exposed crack line up a seemingly impossible face. And, at 5.10c, I figured its well within our capabilities.

Sister Superior Tower in Castle Valley, Utah. Jah Man pretty much climbs the lower left part of the southwest face and then in the center part for the upper three pitches.

We recruited Mikey Santoro and old Steve Cizik, some of our fellow crack buddies who love towers. We all rolled down late Friday night and cowboy camped in some dirt cul-de-sac near the access 4WD dirt road. Unfortunately, a few parties of two got early starts and started hiking the dirt 4WD road well in front of us. It was still pretty cold and we decided to just relax and drink coffee and sort gear. It was a relatively short route and we had all day and the weather looked to be spectacular. We got in my Tahoe and drove the rough 4WD road, which is really a wash at the bottom of a valley, as far as I felt comfortable in driving. I then carefully turned the Tahoe around and parked it. We hiked for an hour uphill to the base of the tower and observed three different to-man partied on it. No matter, though, as they were all pretty proficient and efficient. We really only waited 30 minutes and befriended the nice duo in front of us from Boulder and Salt Lake City.

Mikey and I teamed up as did J and Steve. I started up the pretty cool short 1st pitch (5.9) linking it together with the great 2nd pitch (5.8) dubbed the Sister Squeeze. It was a super fun pitch of chimneying up between too fairly featured walls. 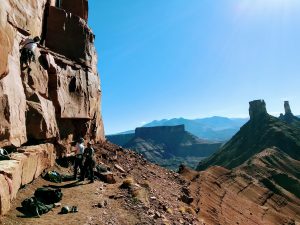 Me starting up the short 5.9 1st pitch 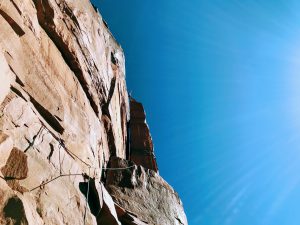 Me at the top of the Sister Squeeze 2nd pitch

Next up was the crux 3rd pitch at 5.10c. The crux was short but strenuous. I think if and when I could climb it again, I would lead it clean, but its thin hands to a traverse left out with decent holds and once you can get the sequence down its much easier as with anything. The exposure definitely adds to it as well and plays a few tricks on your psyche. Nonetheless, I made the traverse and pulled over the lip and followed the easier sloping crack up to the anchors. I brought Mikey up to me and he agreed it was a tough crux section. 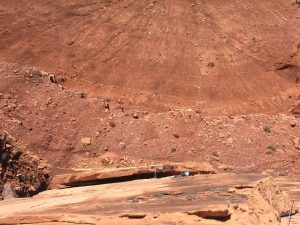 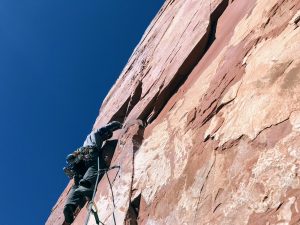 The 4th pitch was pretty tough as well, but very cool thin hands and a lengthy pitch at that. I ended up at a nice belay ledge just below the summit and brought Mikey up to me. 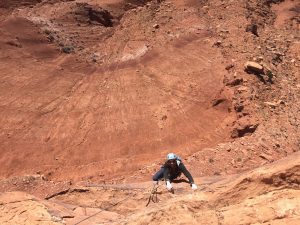 Mikey finishing up the 4th pitch. I think this pitch would be a 5.10b or so

Finally, we were set for the short 5th pitch (rated maybe 5.10a or so). It was a bolted pitch with only 3 bolts and sort of a one move wonder. It was fun. 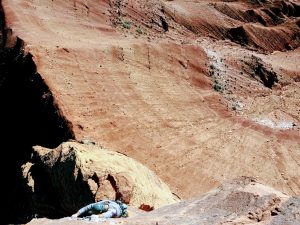 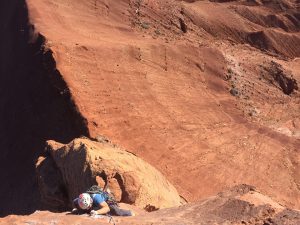 I am not sure what time we were on top, but man what a summit it was and the weather was just perfect. We probably spent 30 minutes on top taking it all in. 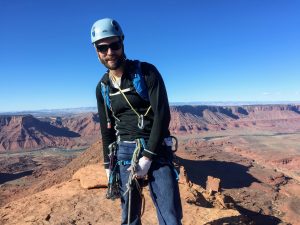 Mikey on the summit of Sister Superior

Me on top with the Rectory and Castleton in the distance 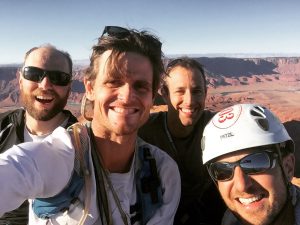 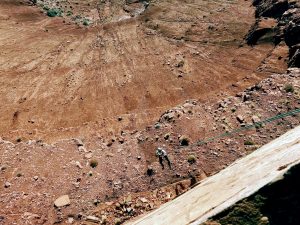 Me on the double rope rappel to the ground 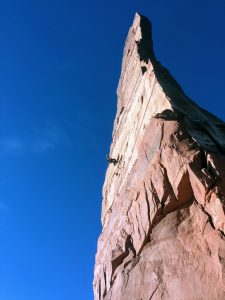 Stevo on the last double rope rappel to the ground

We hung around at the base of the tower and packed up and took pictures. The alpenglow was amazing on the Rectory, Priest, and Castleton. 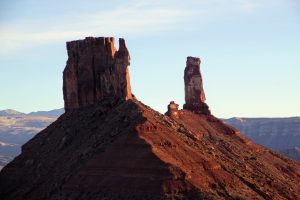 We hiked down and returned to my Tahoe right at dark for the fun drive out the wash. Back in Junction we went to our staple Red Robin for burgers after any tower. Mikey and Stevo cruised back to the Front Range late that night while J and I lapped S-crack (5.10d) in Escalante Canyon the next morning. We were hoping to get on our favorite Willy’s Hand Jive as well, but a crew from Boulder and the Front Range were camped out on it all day and wouldn’t let us get on. C’est la vie. Poor ole Escalante ain’t so much a hidden gem anymore when hoards from the Front Range are weekend tripping it to this secluded canyon. It is what it is, though a bit sad. However, we are all part of the problem. I’ve definitely been in that big group camped out on Willy’s before so I am not one to say anything. Climbing S-crack 4 times was a work out in itself, so we had fun and were back in Edwards mid-afternoon. I definitely have better beta now to lead it maybe clean next time. 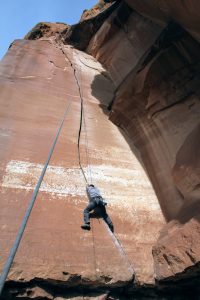 J finishing up the cruxy fingers portion of S-crack

J getting into the offwidth portion to the anchors

Always wonderful to do a desert weekend and towers are a special experience. I would definitely go climb Jah Man again.