After two unsuccessful camping attempts with a much younger Sawyer in 2015, we were finally successful this past Memorial Day Weekend and let’s just say Sawyer passed with flying colors! As parents, Kristine & I were very pleased. And, we did it in one of our favorite car camping/climbing areas: Escalante Canyon, Colorado. One of these unsuccessful camping attempts was in fact in Escalante Canyon over a year ago. Sawyer’s sleep was disrupted by a heard of cattle “mooing” a few feet from our tent at 10:30pm, which forced us to abandon the trip and drive back to Edwards arriving home around 2am. Live & learn, I guess 🙂 We packed up last Saturday morning and made the 3 hour drive to Escalante in our new 2008 4-door Chevy Tahoe, which we recently bought from my parents. Its nice for a change to have a reliable truck that can fit all of us comfortably plus not having to worry if the headlights will go out 🙂 Our friends Keith & Sarah with their daughter Melodie (a month younger than Sawyer) and dog Molly were already down there as were friends Lauren & Steve (with their dog Scout) and our good buddy Mikey. After walking around with Sawyer in the backpack trying to get her to nap while Kristine and Keith set up our mega tent and pack-n-play, we returned having had no nap because of Sawyer’s new surroundings, sights, & sounds. Around 4pm, Lauren, Steve, Mikey, Rainier, Kona, Scout, & myself all went to the Interiors Wall and climbed 5 or so routes I was pretty familiar with including the “cave” routes called Interiors (5.9-) and The Shaft (5.10a). Keith came up to check out the cave as well. Arriving back at camp around 7pm, we all hung out around the campfire, ate dinner, and had a nice evening. 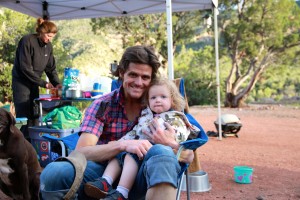 Me & Sawyer back at camp 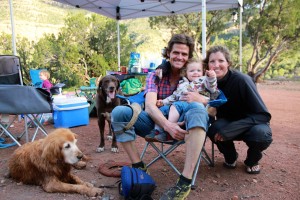 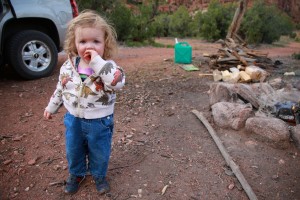 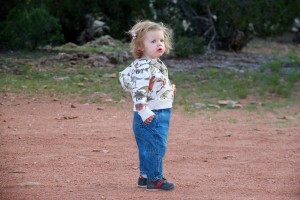 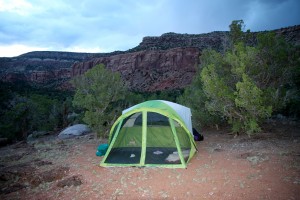 Our tent in an amazing setting 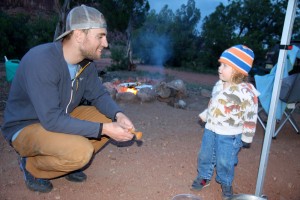 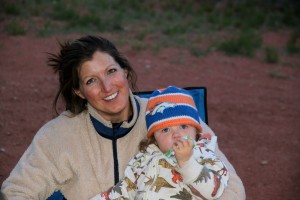 Sawyer stayed up late! I don’t think she went to bed until around 9:30pm. Definitely the latest she has gone to bed. She didn’t even wake up when Kristine, the dogs, and I came into the tent around 11-11:30pm. Gosh, she slept well. Must be that cool and crisp desert air. I slept well, too. I always tend to sleep better in the desert than just about anywhere. We woke up around 8am and Sawyer didn’t stir until 8:30am. Kristine & I looked at each other and we both noticed that “ecstatic” expression in each other’s faces. Maybe we need to do more camping! 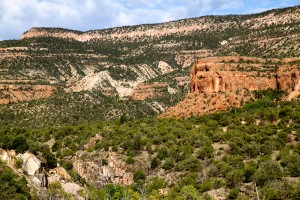 Gorgeous Escalante Canyon from our campsite 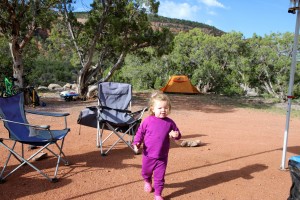 Morning, Sawyer! She has much nicer Patagonia long underwear than I do! 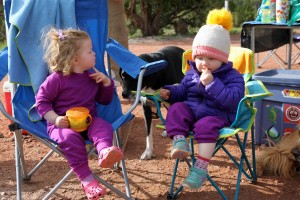 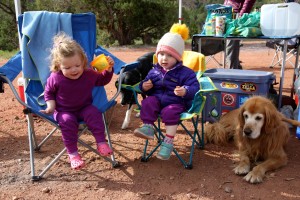 The little gals and Rainier

We hung around and had breakfast and took the dogs down to Escalante Creek to swim while Kristine drove out to Highway 50 to get cell service and work on getting her condo under contract. When she got back, I had packed up the Tahoe and we were ready to roll whenever we were to be done climbing. Kristine was so wonderful to hang with Sawyer and the dogs by the creek while I took Lauren, Steve, Scout, & Mikey up to quite possibly my most favorite crack I’ve ever climbed: Willy’s Hand Jive (5.10+). Maybe that doesn’t say a whole lot, but I sure do love it. Keith came up with us as well to check out our crack addiction 🙂 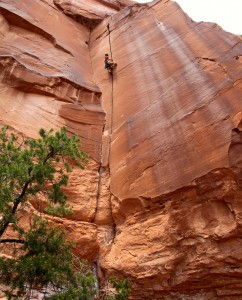 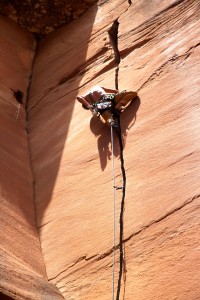 Placing gear before the crux pod 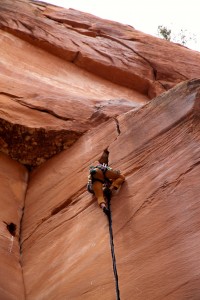 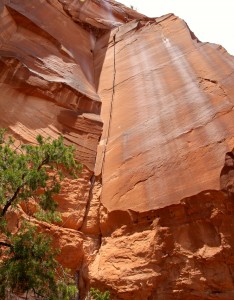 Mikey did a lap on Willy’s and then we went over to setup an adjacent route called Rusty’s Cave (5.9+). Lauren & Steve took a good stab at Willy’s and hopefully learned a few trick of the trade with regard to this thing called “crack climbing”. Its definitely very technique-driven and takes awhile to hone in on the various maneuvers that work or don’t work. We left the rope up on Rusty’s cave for Lauren & Steve as I needed to head out because Sawyer’s nap time was fast approaching. Mikey and I rolled back to the car by 2pm and we joined up with Kristine, Sawyer, & the dogs at the small picnic table in the shade. We met two nice women as well at the picnic table. One had a 14 week old son in the baby bjorn. We chatted for awhile as they were both originally from Austria. The woman with the baby lived in Ridgway and her friend was visiting from Austria to keep her company while her husband was guiding in Alaska. Turns out the woman with the baby’s name was Ava House, wife of Steve House, one of the most accomplished, respected, and skilled alpinists out there. Pretty cool. I had forgotten Steve House lived in Ridgway. Sawyer promptly passed out as soon as we started the 11 mile drive on the dirt road to Highway 50. She was exhausted, but a good exhausted. We arrived back in Edwards around 5pm very happy with how things went for Sawyer’s 1st successful camping trip.