A little behind in our blog entries, but the whole Chalk family made our annual trip down to Escalante Canyon, CO on Friday, May 19 for some camping and crack climbing with friends. Always fun to get down there in the Spring and Fall as the Summer is just too darn hot. Sawyer slept most of the 3 hr drive, which was great, and we arrived finding a nice campsite around 5pm. All of our friends trickled in over the evening and next morning hours.

Sawyer & Kristine in our big tent 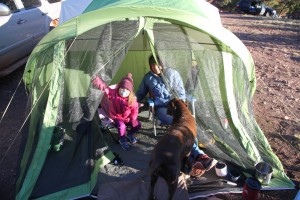 The next morning in the tent vestibule

I think this little gal likes camping in the high desert

It was chilly at night, but once that sun hit Saturday morning, things really warmed up nicely. 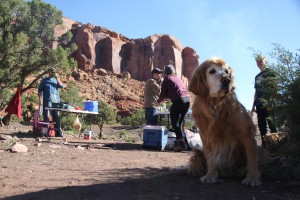 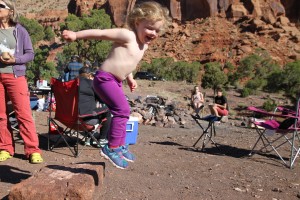 Sawyer displayed her desert energy by jumping off rocks

Most of us then went off to the Cabin Wall and likely our favorite route, Willy’s Hand Jive (5.10+). I led up Willy’s and set up the top rope for folks. 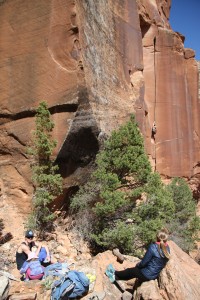 Grayson climbing Willy’s with the gals in the foreground 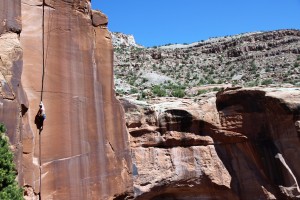 Grayson again on the amazing Willy’s 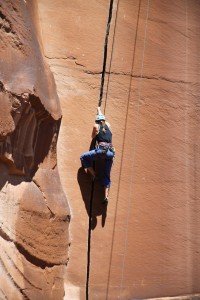 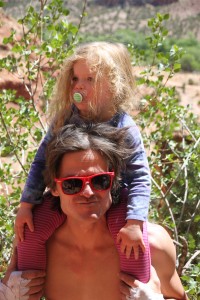 Me and the Sawyer 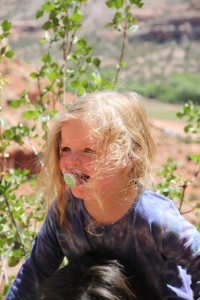 Happy Sawyer at the wall 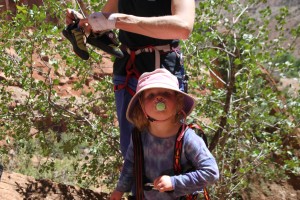 Sawyer getting harnessed up for some 5.10s 🙂

Jesse & Natalie each took a turn to lead up the imposing Rusty’s Cave route (5.10-) next door to Willy’s. They did awesome, but the crux is the cave at the top where it got wide. Its a bit weird for sure. I finished it off for them and set up the top rope for everyone. 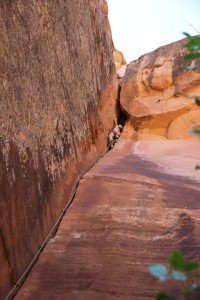 Me leading the last part of Rusty’s Cave 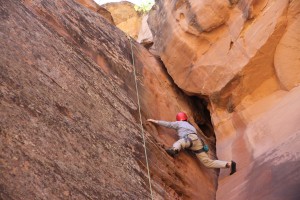 Jesse on the Cave route 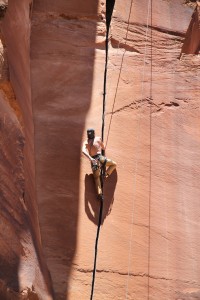 Me taking a lap on Willy’s

Me higher up on Willy’s 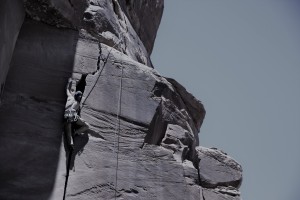 At the funky offwidth pod crux on Willy’s

I then took my camera and climbed up Willy’s again and anchored myself to take pictures of Jesse and Natalie climbing. 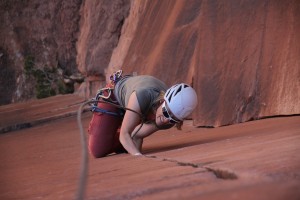 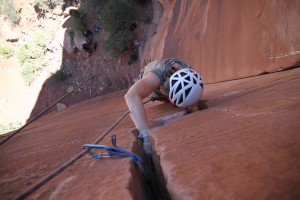 Natalie at the crux pod 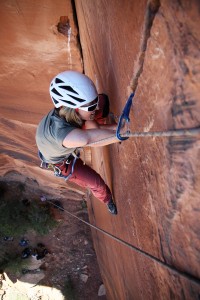 We wrapped it up and headed back to camp around 4pm. Sawyer was able to nap for an hour on Kristine’s back as she walked up and down the road. I then took Rainie and Kona down to the creek to let them swim since it was pretty hot outside. I drove them down to the Cabin Wall and parked on an incline. The automatic rear door lifted up so slowly that before I could grab Rainie to lift her down she had jumped out and went down hard on her right front leg and laid sprawled out in the dirt. I was terrified and grabbed her and felt around…It seemed that nothing was broken, but she was in pain and could put zero weight on it. I carried her to Escalante Creek and soaked her legs hoping it may help. I then carried her back to the Tahoe and we drove back to camp. Everyone was worried and gave their medical opinions on what to do and if it were broken or not. Eventually, I just made the decision I wanted to drive back to Edwards and see our vet later that night. So, we packed up everything and loaded it all into the Tahoe. However, before we left, good buddy Steve Cizik had set up this awesome zip line for his kids and Sawyer gave it a good crack. I think the video speaks for itself:

We hated to leave Escalante and the whole gang, but I had to get Rainie looked at. Its all I would think about until I could do so. We arrived back in Edwards around 9:30pm and saw our vet at 10pm. After some x-rays and an examination, nothing was broken. She had likely sprained her ankle. They gave her some morphine for the night and sent us home. It took a few weeks to really heal (or close to heal), but she is doing much better now. Always scary when a really old loved one hurts him or herself. Fortunately, she was able to bounce back for the most part.