Cold Climbing in the Monument

Typically, when a decent storm rolls into Colorado bringing snow, one would want to head for the slopes or backcountry for some powder turns. Well, Steve, Mike, and myself decided to head west to get out of the snow and onto some sandstone. It wasn’t looking too promising, but we pulled it off and got on some nice cracks and a tower to boot. However, it was indeed some chilly climbing (temps in high 30s at the warmest part of the day), especially in the shade and when the sun was not out. Our original plan was to head to the Fisher Towers to climb Ancient Art, but it is a teetering tower of mud and would not have been safe after a snowstorm (as it wouldn’t have dried properly) nor would have been good climbing karma to climb this tower so soon after it snowed. The harder sandstone near Grand Junction in Colorado National Monument was safer and in no way did we stand a chance of harming the rock. 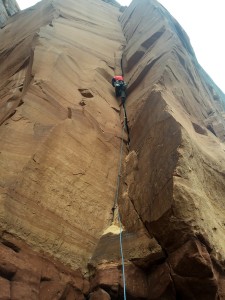 Me leading the 1st pitch of Dewar Dihedral (5.10), a new route I had not climbed on the Monolith Spire 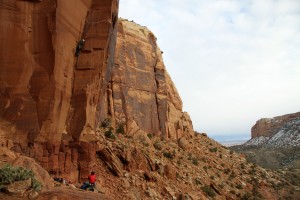 Steve on Dewar Dihedral. This route has a 2nd pitch, but having three of us just didn’t make sense with the hanging belay at the top of the 1st pitch. Next time we’ll do the 2nd pitch 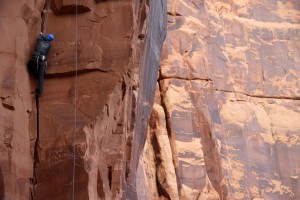 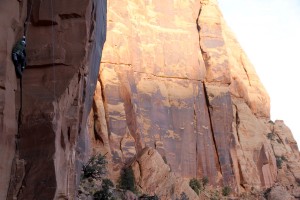 Steve. For some reason when I led this route it was freezing! It got warmer as the afternoon progressed even though then sun was behind the clouds 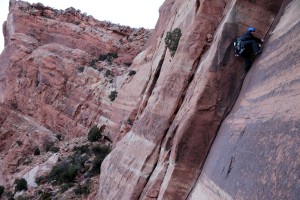 Instead of driving to some trailhead in the dark and suffering through a cold night in the desert, the young Mike followed Steve and my lead and we all checked into the Comfort Inn in Fruita and had a comfortable night in a warm bed. Steve & Mike had never climbed Independence Monument, the 400′ free-standing tower in Colorado National Monument, via its moderate classic 5.9- route called Otto’s Route. I had climbed it twice, the first time with Jesse Hill and the second time with Kristine, and knew it well. The only issue with Otto’s Route was that the 1st three pitches were on the west side in the shade. It was to be very chilly on the fingers and toes. I was the 3rd wheel along for the ride taking pictures while Steve led pitches 1 and 4 and Mike took pitches 2 and 3. Finally, we got in the sun at the top of pitch 3 and it was a sunny and warmer pitch 4 and summit. 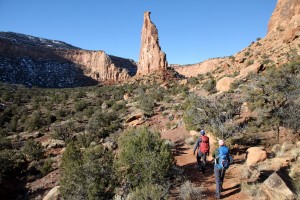 Hiking the 2 miles into Independence Monument 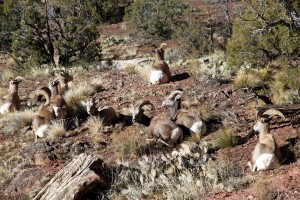 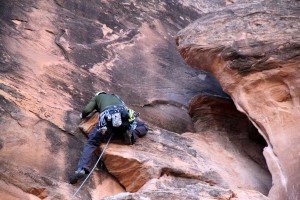 Steve making one of the most awkward moves of the day on the 5.6 pitch 1. The cold really contributed to zero friction between your hands and shoes and the sandy rock, i.e. the cold made 5.6 feel way harder 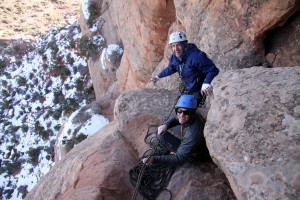 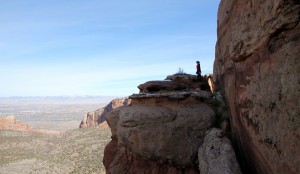 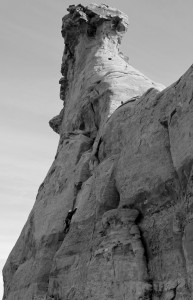 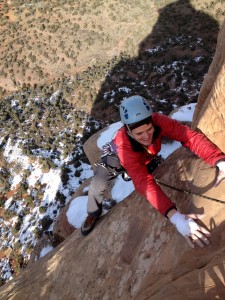 Me topping out on pitch 3…into the sun, finally! 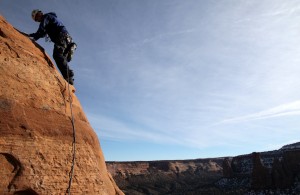 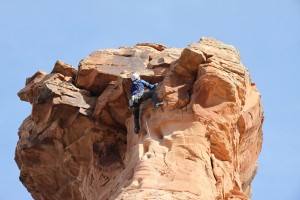 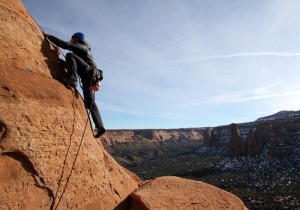 And Mikey is off on pitch 4 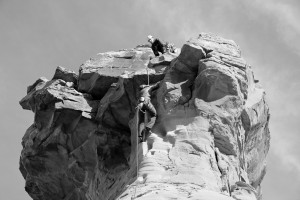 Steve belaying Mikey up the roof 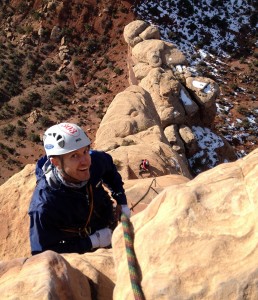 Its then just a short belay away from the true summit cap. Mikey took this pic of Steve and me way down below 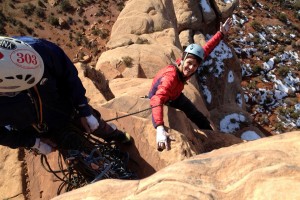 Me goofing around on the roof move 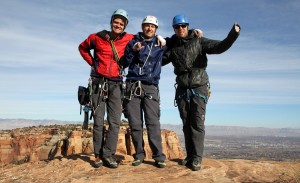 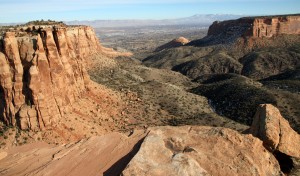 Gorgeous Monument Canyon from the summit 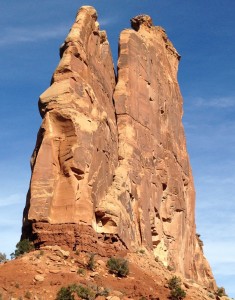 A nice hiker (Toni Leuthold from Winter Park) took this pic of us from the ground. You can see my red jacket on the summit of Independence Monument 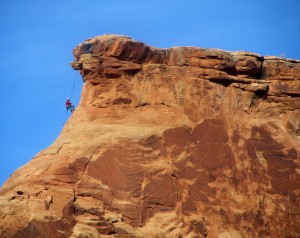 Me rapping off the summit. Photo by Toni Leuthold

Two double rope rappels and we were down on the ground again around 1:30pm. We started hiking back down Monument Canyon and the high clouds rolled in and blocked the sun yet again. It got pretty chilly. Oh well, at least we had sun for the tower’s final pitch and summit. We wanted to go to the fun 120′ crack route called Wide Load (5.10) that I had climbed before, but a pair of climbers were on it. So, we bouldered around for 30 minutes waiting for them to finish up. Steve set up his phone and speakers to get the Broncos game. Climbing Wide Load seemed tougher than normal because of the cold but all good fun. However, listening to the Broncos game was not fun. Disappointing to say the least. 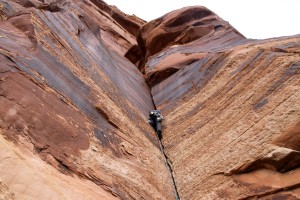 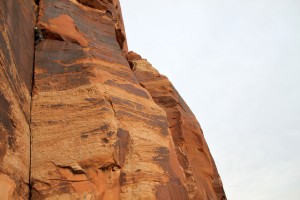 Steve at the roof on Wide Load 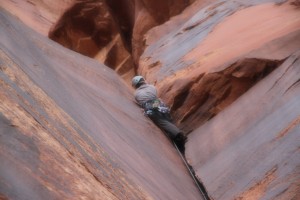 We pulled the rope and then I led Wide Load

By 4:30pm, it was just too cold to stay out. Our fingers and toes were numb. We packed up and headed out to the trailhead. All in all, despite a less than favorable forecast, we made the most of our rock climbing weekend and got on some good stuff. I’m looking forward to hopefully another one or two winter trips to the desert.