This past Saturday was the annual Vail Uphill Race in honor of our good friend Sylvan Ellefon’s father, Lyndon Ellefson. Its always a great event put on by our friend Ellen Miller who does a stellar job. While we’re not really into the whole racing scene, this is one we try and do every year if we are in town as it honors the Ellefsons and is such a great way to start the day with like-minded outdoorsy folks. The only drawback is the crack of dawn 7am start. I have no problem getting up to climb a mountain, but when it comes to doing an all-out race pushing yourself to your threshold that early in the morning, it gets a bit tougher. However, a few cups of coffee got me wide-eyed and I was ready to go. Unfortunately, Kristine was in Washington, DC visiting her sister and her family and was unable to race this year. My good friend Reid Jennings came up and stayed with me this weekend to do the race for his first time. Over the last few years the Eddie Bauer winter games in Vail has incorporated this race into their games, but because of the World Alpine Ski Championships in 2015, the winter games are being postponed for whatever reason(s). At least the Vail Uphill race is still an annual event spearheaded by Ellen Miller and her wonderful efforts. You can read more about the race course in this post from last year. I still used my Koflach mountaineering boot/Silvretta 404 binding setup like last year as it is a bit lighter than my telemark setup and gives me an extra bit of speed on the uphill. I’m just not willing nor interested in investing in the super lightweight AT race ski setup as the skiers ahead of me in the race were sporting. I’m fine with just pushing myself as hard as I can with what I have. Again, any of these ski setups are considered the “Heavy Metal” category in the Vail Uphill race which is what I entered again. However, in my humble opinion, these lightweight AT ski setups are hardly “heavy metal”. I’d love to see these setups in the backcountry or charging down powder-filled couloirs on the higher peaks. Any reasonable person would never use these race setups for any other reason than racing uphill. But, it is what it is and I just go as fast as I can with my heavier/clunkier setup. All I’m ever doing is racing against myself. Some friends have said to me “why don’t you get a lightweight AT ski race setup and do more ski-mountaineering races”. But, honestly, I’d rather be doing winter mountaineering and real ski-mountaineering adventures in the high peaks with good friends than being a race guru with ski-mountaineering races every other weekend. With all that said, I’m pretty pleased with my result of 45 minutes and 45 seconds to cover the 2.06 miles and 2,475 vertical feet on my ski setup, which was 18 seconds faster than my time last year. I may just enter the “open” category next year and see what I can do there with my trail runners and microspikes – I think I could shave minutes off my time. Reid did very well in the “open” category with a time of 50 minutes and 49 seconds. The results are below:

An awesome breakfast at Eagle’s Nest ensued full of eggs, bacon, etc. I didn’t quite make the “podium” this time (4th in the ski category), but got some good swag and a bottle of wine. It was a nice way to spend a Saturday morning with friends and familiar faces.

The next day Reid, myself, and good friend Derek Drechsel were targeting a climb up the high 13er Pacific Peak’s west ridge, but the forecast for the winds was not what the doctor ordered, especially since this is an exposed ridge facing west and we would feel the brunt of the 50mph gusts the whole day. I then remembered the intriguing 13er Jacque Peak south of Copper Mountain, which you can see as the large pyramidal peak to the southeast when driving east down Vail Pass. The plus with climbing this peak is that we could climb from the east pretty much the whole time up to about 12,500′ and then hopefully just deal with the ferocious west winds the final 700′ up the northeast ridge. I had read reliable information on a few winter ascents up Copper Creek from Highway 91 to the base of the Blackjack lift on the backside of Copper Mountain, on up into Copper Bowl, and then onto Jacque’s northeast ridge. We parked 4.2 miles south of I-70 & Copper right off Highway 91 at the entrance to the private access road to the Tailings Ponds. It was an enjoyable snowshoe through the woods up into the Copper Creek drainage breaking trail in a good 6-8″ of fresh powder on top of a firmer base. We then found pieces of red and blue tape on trees every so often (put up by Copper ski patrol) to lead the way up to the ski resort boundary and the base of the Blackjack lift. I believe these markers are to help guide folks skiing the sidecountry run from Copper Ski Resort out to Highway 91. After hopping the rope and continuing our snowshoe up the catwalk into Copper Bowl passing the Mountain Chief lift as well, we were greeted by Copper Mountain ski patrol on their way down the snowcat groomed trail from where Copper offers cat-skiing in upper Copper Bowl. Bad news from ski patrol dampened our spirits. They were nice about it and I didn’t feel like arguing, but they said Copper Mountain Ski Resort does not allow uphill access during operating hours and would not allow us to use their cat walk (in-bounds) and then leave the ski area to access Jacque Peak. I was pretty surprised – I had not heard of this before. There was no way we could have stayed off the cat walk, which is on the ski resort boundary, due to the high avalanche slopes coming off Turner Mountain’s north face to the south. They stated that because we used their in-bounds terrain we could not continue uphill and leave the ski resort. They continued to tell us there is high avalanche danger, which of course we knew and therefore planned this safe winter route up the low-angled Copper Bowl to a ridge, but obviously they are just doing as they are told and the common denominator is that the ski resort is afraid of getting sued if we used their terrain and then were caught in an subsequent accident (avalanche or whatever). Self-reliance these days seems to have all gone out the window. And, of course the ski patrol didn’t know us apart from some tourist who had never stepped in the backcountry before. They are just trying to protect their hides. Its unfortunate that the whole ski resort/uphilling issue has come down to this. But its inevitable when people are searching for someone to blame when an accident happens. 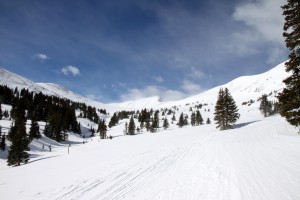 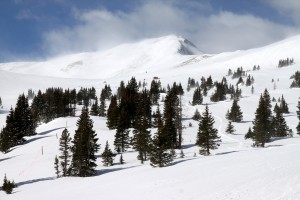 Jacque Peak’s northeast ridge at the head of Copper Bowl. The Copper Mountain snowcat can be seen for cat-skiing in upper Copper Bowl

Nevertheless, we bid the ski patrol adieu and turned around to go back down the catwalk. Wanting to do a bit more with the day, I suggested to the boys to climb up to the summit of “The” Copper Mountain – the mountain Copper is named for as the ski resort resides on Copper Mountain’s northern slopes. To hopefully get a jump on the Sunday ski traffic, Reid & Derek decided to descend back to the cars and make the drive back to Denver. I decided to head up to Copper Mountain’s summit and ascended the treed slopes to the east of the ski resort boundary through deep powder. 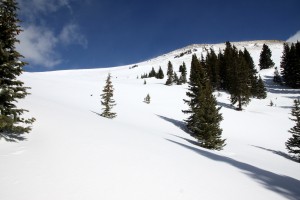 After 30 minutes I broke out of the trees and then ascended Copper Mountain’s southwest ridge keeping outside of the ski resort the entire time for another 30 minutes to the brutally windy and cold summit at 12,441′. However, the sun was out and the views were nice. This was a vista I had yet to visit and the views of the Tenmile Range to the east and the Gores to the north were all new for me. A skier a hundred feet below me who had apparently hiked up a bit from the top lift to the north gave me a wave and a funny look. 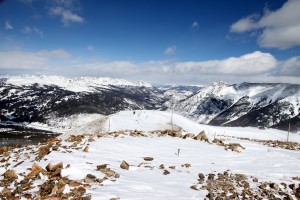 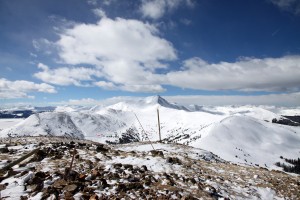 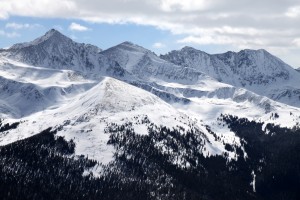 The Tenmile Peaks to the east. Left to right: Pacific, Atlantic, Fletcher, and Drift

Looking south to Mt. Arkansas and its northwest/north ridge

Looking south over the Tailings Ponds to the Sawatch Range (Mt. Elbert stands tallest at right in picture) 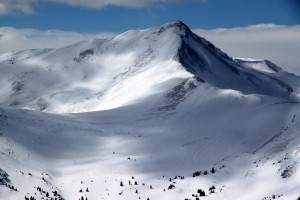 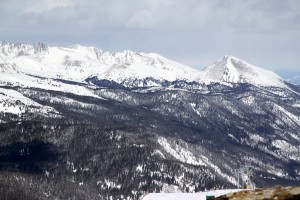 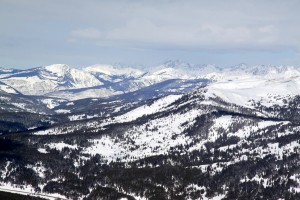 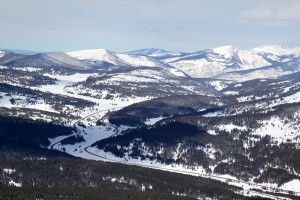 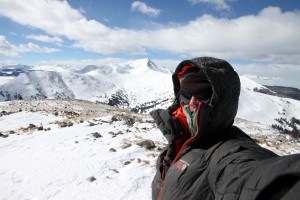 Here’s a little video just to show how windy it was up on top:

After a good 20 minutes on the summit of Copper Mountain, I retraced my snowshoe tracks all the way back to my truck arriving at 1pm. It was still over a 2,200′ ascent from my truck to the summit and so a pretty good workout and some new terrain for me. Here’s a map showing the Copper Creek route to Jacque Peak (in red) and my route up Copper Mountain (in black): 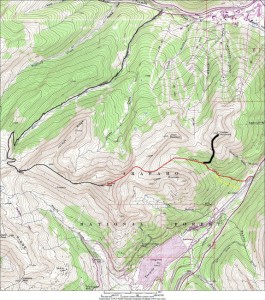 Map of the Copper Creek drainage route (red) up to Jacque Peak. We actually took the alternative yellow route just to the south of Copper Creek to avoid being in the ditch of the creek itself. Also, my route up Copper Mountain is shown in black

All in all, a nice half-day adventure on the backside of Copper Mountain. In retrospect, I think its best just to try and avoid ski resorts altogether in trying to access other terrain (at least during ski resort operating hours). Speaking of non-operating hours, perhaps we’ll just do a full moon night ascent up the Copper Creek route. Now that sounds like a nice way to spend a full moon evening.