I had climbed Rainier 9 yrs ago in August of 2000 via the standard Disappointment Cleaver (DC route) with two buddies of mine as my 1st real glaciated mountain climb and absolutely fell in love with mountaineering. I hence named my golden retriever after the mountain as well and have been climbing higher and more involved glaciated peaks ever since. When my two buddies, Steve & Nico (the Cizik brothers), asked if I would like to come with them to attempt the Tahoma Glacier route on the west side of the mountain, I was definitely in as was buddies Matt, J, and Baba. I had done many glaciated climbs with J before including Hood and Denali and I think the Ciziks liked having us along because they believe we bring good luck with the weather. This would be Baba’s 1st big climb on a glaciated peak. The Ciziks had attempted this route 3 yrs prior but due to the lower part of the glacier being heavily crevassed and hence difficult and time consuming route finding, they made it to 12,000′ on the Tahoma Glacier headwall before having to turn around. They had also avoided the lower part of the Tahoma due to being heavily cracked up as it was August and ascended the Puyallup Cleaver adjacent the glacier which took up additional time. Thus, the Ciziks were extremely motivated to climb the Tahoma and our plan was to carry full loads up and over the summit with a camp in the crater rim and descend the easier standard DC route. The Ciziks’ father, Rob, had tried this route three times throughout the 80s and 90s and again with his sons but unfortunately never made the summit from the Tahoma. However, Rob and Nico’s wife, Celeste, would climb the DC route and meet us in the crater rim after our overnight at 14,200′ and we would all descend the DC route together. It was a great plan and fortunately it all went according to plan. 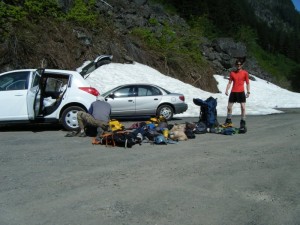 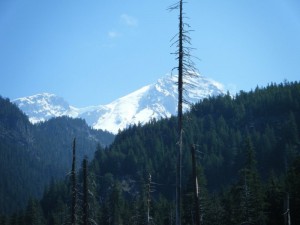 Point of Success and the Tahoma Glacier and headwall from around 3,000′ on the Westside Road 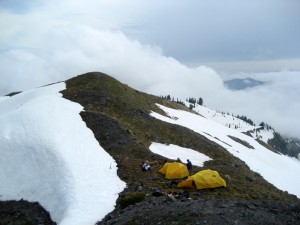 We backpacked with heavy loads of gear and food from 2,800′ to 6,000′ on Day 1 and camped at the easternmost point of Emerald Ridge on some dry ground 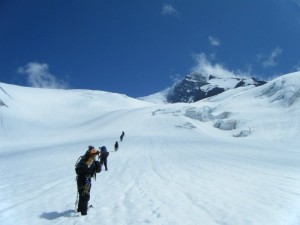 On Day 2, we slept in a bit, cranked some coffee, jammed out to some 80s on my solar powered radio and then we were off onto the lower Tahoma Glacier

The lower Tahoma Glacier was filled in enough where it was much more direct and less time consuming then climbing the Puyallup Cleaver to the north. Our late start that day had a small price of some annoying post holing for the leader but we didn’t mind one bit considering we didn’t have to deal with the additional weight of snowshoes on our person. The lower part of the Tahoma Glacier was definitely some fun crevasse meandering and route finding. 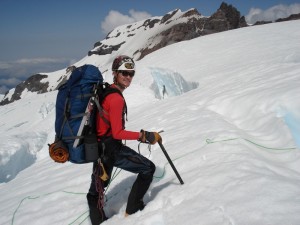 Me negotiating one of the numerous crevasses and snow bridges

After 4,000′ of moderately steep glacier travel and route finding and sitting out an intense electrical storm in which our poles, pickets, ascenders, biners, etc were building charge and making noise, we rolled into our camp 2 at 10,000′. I’ve never had to deal with electrical storms on a glacier but I tell you it is a scary ordeal. Nowhere to hide or run…all you can do is take off your pack and metal gear, put it a good distance from yourself and get low and wait it out. 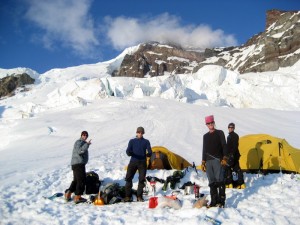 The Ciziks did a bit of route finding through the remainder of the lower Tahoma Glacier to the base of the headwall after we rolled into camp. This was much appreciated as it probably saved us 2 hrs of route finding and headaches in the morning for summit day.

After waking up at 2:30am and entirely packing up camp on our backs (as we would carry all our gear up and over Rainier), we departed camp 2 around 4:30am.

Summit day morning around 4:45am shows Matt with a monster crack we crossed over

We made it to the base of the headwall (around 11,000′) and considered our future. 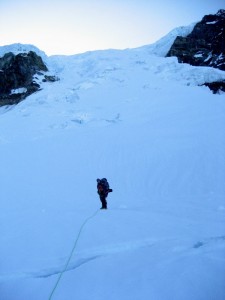 J with the Tahoma Glacier headwall behind (2,300′ of crevassed 50 degree snow) 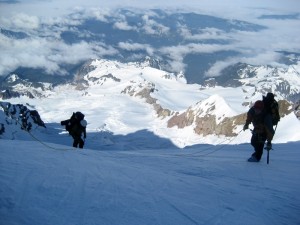 Me climbing the Tahoma Glacier headwall with Liberty Cap behind me

The headwall’s sustained 45-50 deg snow let up around 13,300′ but not without a major obstacle for us to overcome…a major crevasse that traversed the entire glacier and only two potential snow bridges to cross at around 13,100′. We decided on the larger one, but the uphill side was severely overhanging the crack. Steve went first on a tight boot axe belay from Matt and made it across. Then, Matt went on a tight boot axe belay from above by Steve and below by Nico. Then, when we thought Matt was across, the entire bridge and overhanging part of the crevasse wall went! Nico immediately hit the ground to arrest the fall, J jumped on top of Nico and I set up a picket as an anchor with ascender on the rope to Matt. However, there was no tension on the rope. We did not know what was going on and why there was no tension. Low and behold, the crevasse constricted to about 7 feet in width about 20 ft down and the snow debris had wedged in between the constricted part and Matt had fallen 30′ onto his back on top of the wedged debris. Fortunately, he was ok as Baba called down to him. We pulled Matt out on the downhill side of the crack and he regained his composure. I don’t know of anyone who could have regained their composure as quickly as Matt did. 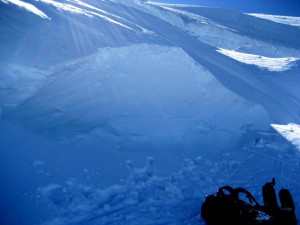 The aftermath of the snow bridge and crevasse wall collapse

So, we had a dilemma…Steve was on the uphill side of the 8 ft wide crack and the remaining 5 of us on the downhill side with only a foot wide by 3 foot deep bridge that we didn’t even consider crossing before. It seemed like it would go if we just touched it. However, it was our only hope. Matt got back on the horse again after his fall and crawled across the narrow bridge without his pack while Steve anchored himself in from above with a picket and belayed him and Nico belayed him from below. He made it! The bridge held! We went one by one, crawling across the bridge and all of us had made it except Baba who was deeply concerned with the bridge holding considering he was 215 lbs and had a 60 lb pack on his back. However, we had 4 pickets in the ground and belayed him from above with a very taught rope essentially trying to pull him upwards and the bridge held much to Baba and our relief.

Me belaying Nico up the narrow snow bridge

If there had not been any bridge to get across after the collapse of the seemingly large one, Steve would have had to set up a bombproof anchor from above and we each would have had to drop down into the crevasse and ascend the rope up the uphill side…it could have been very time consuming but doable for us. Fortunately, we didn’t have to go there. Another couple sunny days and that small bridge would be gone and the route wouldn’t go anymore without setting up a ladder or tyrolean traverse. With the drama behind us, we gathered ourselves and climbed the remaining 1,100′ to the west end of the west crater rim dodging crevasses here and there. 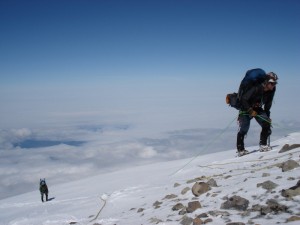 Me almost to the west crater rim with Baba behind after climbing the much gentler, less crevassed final 800′ of the Tahoma Glacier

Baba, J, and me on Rainier’s summit after climbing the Tahoma Glacier 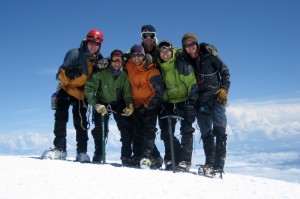 I knew my good buddy Caleb Wray and his team of skiers had successfully summitted Rainier the day before since I saw their ski tracks heading south off the summit towards the upper Nisqually Glacier and the Fuhrer Finger. Congrats guys on a great climb and ski descent! We then headed down to the east end of Rainier’s main crater rim and set up our camp 3 about 50′ away from where the standard DC Route comes up and over the crater rim so we could watch out for Rob and Celeste the following morning coming up that route. After hours and hours of eating, drinking, sipping some scotch, and napping, Baba, J, and I walked back up to the summit for some sunset views from the top of Washington. 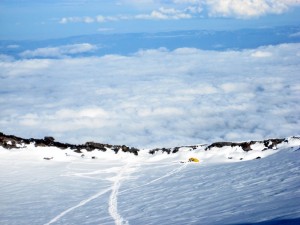 Our 14,200′ camp 3 at the east end of the crater rim as seen from the summit that evening 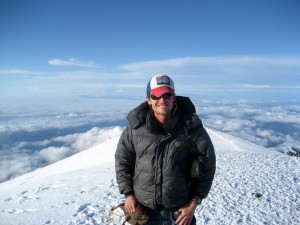 We then hit the sack for as soon as the sun went down it got really chilly. I think the low that night was around 5 degrees on the summit. However, the weather couldn’t have been better for a summit crater overnight. We woke up at around 7am and brewed coffee and ate bagels and listened to some Seattle radio stations on my solar powered radio. A few RMI guided groups reached the crater rim at that time and I have to admit they looked at us with a bit of confusion like what were we doing up here. Nevertheless, one of the guides asked where we were from and we said Colorado and then he asked “Is Brandon Chalk there?” Wow…it turned out to be my good friend Mike Horst who was guiding for Alpine Ascents. Last time I saw Mike was at Aconcagua base camp 3 yrs ago when he was guiding a group and I was climbing Aconcagua independently with two good friends. We asked his clients to wait a bit and he and I caught up on old times. It was great to see him. Celeste and Rob crested the crater rim around 9am and the Ciziks went with them to the summit while J, Baba, and I explored the many deep caves expelling sulfur below the crater rim. We then all packed up and headed down the upper Ingraham Glacier down the normal standard DC route…it was indeed a highway and made me feel so happy that we ascended the much much less traveled Tahoma Glacier. 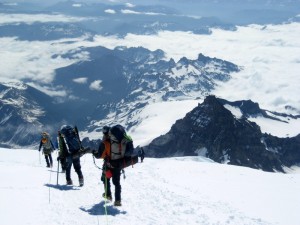 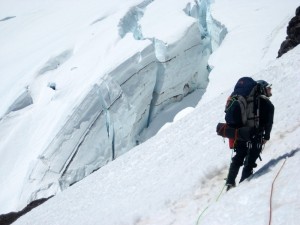 J descending Disappointment Cleaver with a monster crevasse below 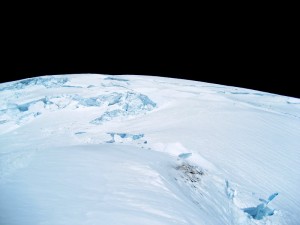 We then made it in no time to Camp Muir, had lunch and re-filled water bottles, and plunge stepped our way down the Muir Snowfield to Paradise for a total descent time from the summit to paradise of 6 hrs and 9,000′. Rainier beers were on the menu and we celebrated our success and safe return and how this climb (excluding the crevasse fall), the weather (excluding the electrical storm), and timing with Celeste and Rob worked out just perfectly. 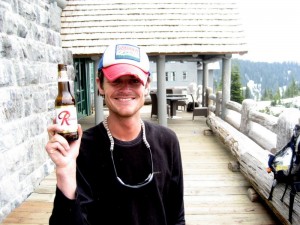