Now I can truly say the Gore Range is my favorite range in Colorado. Its proximity to my home, its ruggedness and remoteness, and lack of people all combine to make this place very special and my favorite. I had been wanting to climb these remote 12ers in the heart of the Gores for some time having always gazed at them from other Gore summits and down the Piney River Valley en route to several ascents of Mt. Powell, Peak C, etc. I had always thought the southeast face up The Fly to its east ridge may make a good climb as well as the double traverse over to The Spider and back to The Fly may make a nice day. I knew there would be some snow, but hopefully the southern facing aspects would be relatively dry. We took a gamble to leave behind the microspikes/crampons and axes and turned out the gamble paid off as we were able to stay on dry rock much of the time. Loving this late Fall weather, Kristine & I backpacked the 4.5 miles into Booth Lake (11,500′) from the Booth TH (8,200′) this past Saturday afternoon. Friends J & Chuck drove to the Eisman Hut and backpacked in from there for a little extra adventure and to meet us at Booth Lake. Kristine & I arrived at the lake to find the place to ourselves at 4:30pm, 3 hrs after leaving the Booth TH. J & Chuck arrived 2 hrs later sharing many adventursome bushwhacking stories. 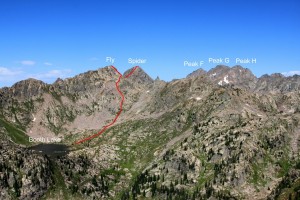 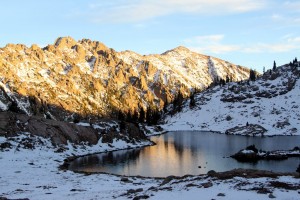 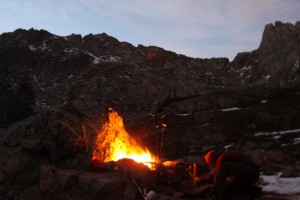 The Fly rising behind our campfire at dusk

After sleeping in a bit and a round of coffee, muffins, & oatmeal, we got going around 9am up to The Fly. 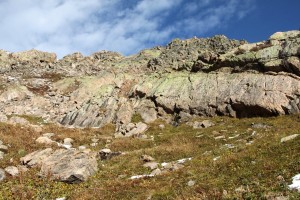 While we could have continued up the class 2/3 grass ramps and cliff bands all the way to The Fly’s summit, I had spotted an access gully to reach the east ridge proper for some fun scrambling. 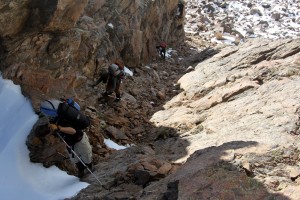 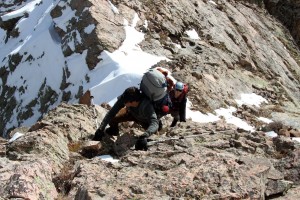 On The Fly’s class 3 east ridge 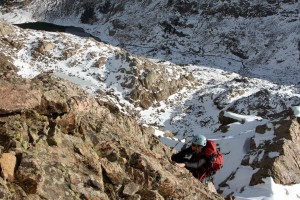 After about an hour from leaving Booth Lake, we reached The Fly’s summit. Glancing over at The Spider, I was glad to see its southern ridge fairly dry. 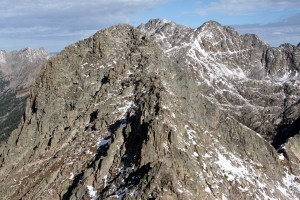 The Spider from The Fly’s summit

The crux would be downclimbing off The Fly’s north ridge keeping in mind how much snow we would encounter on the northern aspect and given that we didn’t bring any spikes or axes. Kristine decided to stay on the summit of The Fly for some R&R while J, Chuck, & I took off down The Fly’s north ridge to The Fly/Spider saddle. We found a mostly dry class 4 chimney on the north ridge proper to downclimb in lieu of traversing steep snow slopes on either side sans spikes/axes. Once to the lowpoint between The Fly & The Spider, we traversed class 3/4 slopes on the ridge’s west side up to The Spider. Several towers could be climbed on the ridge proper and likley go at low-mid 5th class as well. 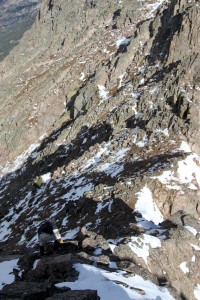 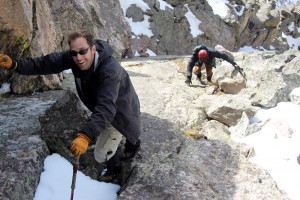 J & Chuck scrambling up to The Spider 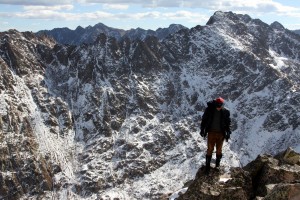 Chuck topping out on The Spider w/ West Partner Peak behind 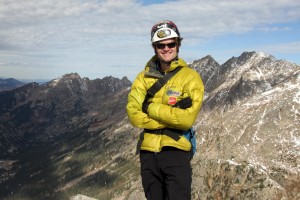 Me on the summit of The Spider w/ Ripsaw Ridge behind 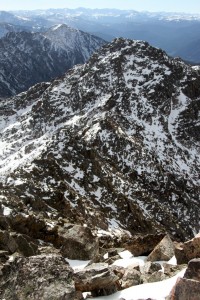 The Fly from The Spider’s summit

After 10 minutes or so on The Spider’s summit, we started back towards The Fly. The wind was howling but otherwise it was a beautiful day. Once back at the Fly/Spider ridge lowpoint, we glanced up at the class 4 chimney we had downclimbed and headed straight for it mostly trying to stay on dry rock.

Looking up at The Fly’s north ridge from the Fly/Spider ridge lowpoint. We descended/ascended the obvious chimney in the center of the picture.

The class 4 chimney on The Fly’s north ridge proper provided the best scrambling of the day. 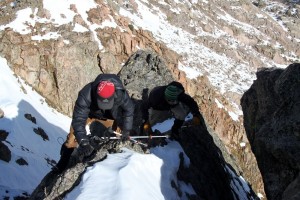 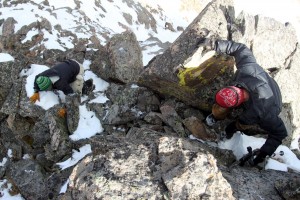 Almost up to The Fly’s summit 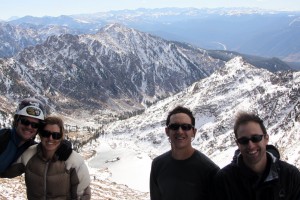 Back on the summit of The Fly with Booth Lake below

Chuck & J had hauled their packs to The Fly’s summit in anticipation of heading down the Fly’s south ridge, down to West Booth Pass, and onto the Eisman Hut. So, the boys took off down the south ridge while Kristine & I headed back down The Fly’s southeast face to Booth Lake. After some PB&Js at camp, we packed up and got back to the Booth TH around 2:30pm. Not a bad morning at all. All in all, another great little Gore trip. These are two great 12ers with some outstanding views and quality scrambling in the heart of the Gores.