Kristine here – A few weekends ago I was home with the dogs and decided that Notch Mountain would make a nice day climb for everyone, especially since I’d never done it. I recruited a few others, but early in the morning as we were about to depart the weather was not looking promising. We arrived at the Half Moon Trailhead (10,300′) and started off on the Fall Creek Trail in a cold drizzle. When we reached treeline, it began to sleet / snow and the wind picked up. Luckily, just as we were a the point of calling it, the sun broke through and we decided to push on. 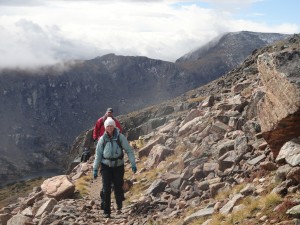 We were all glad we didn’t turn as we made it to the Notch Mountain Shelter (13,077′) with relatively good weather and an excellent view of our local 14er Mt. of the Holy Cross. 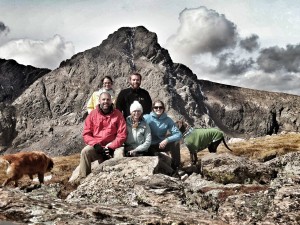 The crew with Holy Cross in the background 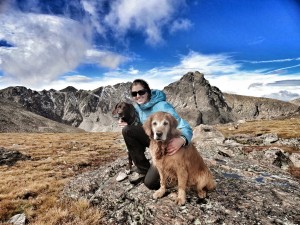 Me, Kona, and Rainier 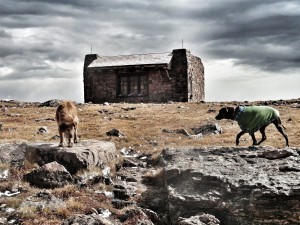 With 5 dogs and threatening clouds in the distance we were satisfied with the hut as our destination. We made it back to the car just as the skies opened up and it began to pour. Overall, a great way to spend a fall day with less than stellar weather.

A week later, Brandon and I decided to go back without the dogs to traverse the “Notch” on Notch Mountain. This time we began on the Half Moon Pass Trail. In just one week, conditions had changed and we ascended in a mixture of rock and snow up to Point 12,743′. 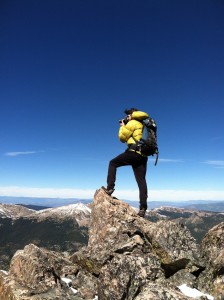 From there we were able to do a bit of rock-hopping to stay mostly on dry rock across the ridge to the true summit of Notch Mountain at 13,237′. 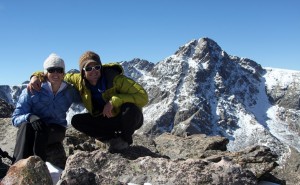 We then descended a bit to the east and entered the “Notch” through a snowy couloir. At this point we were glad we didn’t have the dogs with us as we navigated some blocky 3rd/4th class scrambling up to Notch Mountain’s south summit at 13,224′. 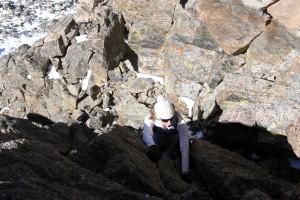 Final class 4 moves back to the ridge

The snow definitely made the scramble more challenging as I was not entirely trusting my shoes and trying to avoid the wet patches. After that, it was an easy cruise down to the Notch Mountain Shelter where I was just a week earlier. 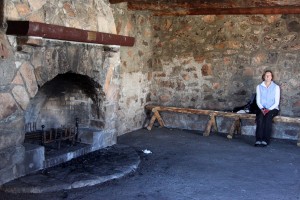 Great stone fireplace inside the hut

We were kind of wishing we could spend the night – the hut is really cool, and much better maintained than any of the abandoned mining huts we have visited. It was fun to see how much snow had accumulated in just a week both on Holy Cross and looking out into the Gores. 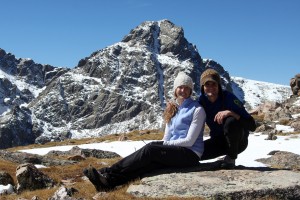 Brandon and I with Mt. of the Holy Cross and its Cross Couloir in the background

We descended the Notch Mountain Trail back to the Fall Creek Trail. I read that there are 36 switchbacks along this route, but it felt like much more 🙂 Both ways of climbing Notch Mountain were really fun. The first climb up to the shelter was a great day with friends and dogs, and doing the loop was a nice way to add in some rock scrambling.