I wanted to relay some information/beta on this traverse as I couldn’t find much on it other than a faint route description over on summitpost. I hope it helps some folks who intend on attempting this traverse. 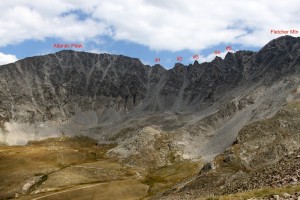 The Atlantic-Fletcher traverse with the 5 gendarmes labelled

My good buddy J and I had been eyeing this traverse for some time now. Dave Cooper in his Colorado Scrambles book calls it arguably the most dangerous of all the routes in his book. J and I found out that Cooper says this for good reason yet we both had alot of fun. The intense scrambling, routefinding, and technical rock climbing at over 13,000′ is just way too much fun. The traverse collects (3) high 13,000′ summits – Atlantic Peak (13,841′), Fletcher Mtn (13,951′), and Drift Peak (13,900′). The most difficult and dangerous section of the traverse is from Atlantic to Fletcher which includes navigating (5) pretty serious gendarmes and more than enough loose rock. The traverse from Fletcher to Drift is mostly class 2 off trail hiking with (1) 20′ rappel if going north to south. We chose to go north to south for the entire traverse as this allowed us to climb the low 5th class pitches of the gendarmes and the crux 5.7 pitch of the 5th gendarme. We like climbing the fun stuff rather than just rappelling it! 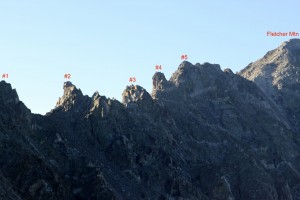 The 5 gendarmes from Atlantic’s west ridge

I had summited each of these peaks before as J had summited Atlantic, but we had never linked them all. We left the car at 6:45am and topped out on Atlantic Peak around 8:15am after climbing the west ridge which we had done a few times before in winter and summer. We then made our way down Atlantic’s fairly mellow (class 2/2+) south ridge to the low point of the ridge between Atlantic & Fletcher. 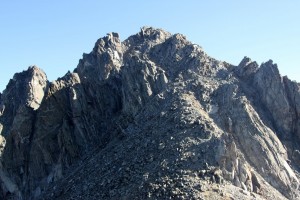 There is a fairly straightforward descent down a scree gully from this low point to Mayflower Gulch if weather or climber’s condition warrants a quick retreat. First on the agenda is the scramble up and over gendarme #1.

The nice class 3/4 scramble up and over gendarme #1

There is another scree saddle/gully between gendarmes #1 & #2 which also likely lends itself to a quick descent back down to Mayflower Gulch. Gendarme #2 then quickly rears up in earnest. 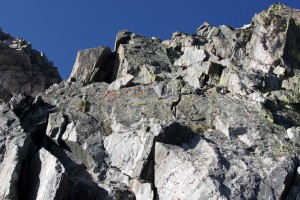 Gendarme #2. We scrambled pretty much straight up this face using the cracks

We climbed pretty much straight up the face for 30′ – likely low 5th class or so. 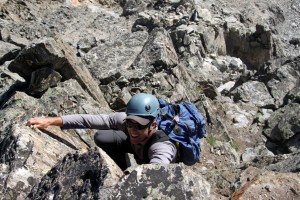 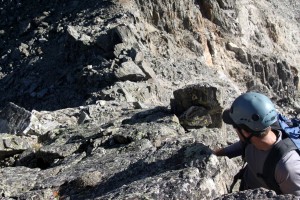 From the top of gendarme #2, we traversed on and just below to the right (west) of the ridge proper on a sporty ledge system until we came to a big cliff that was not downclimable (at least by us). We found a nice chimney to scramble down on the west side of the ridge to avoid this cliff and scrambled back up to the notch below the cliff to regain the ridge. 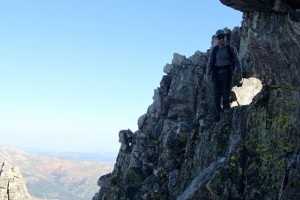 Scrambling down to avoid the cliff 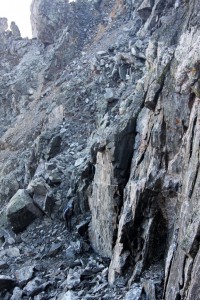 Coming around to regain the ridge 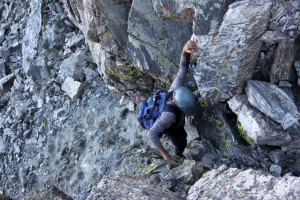 It was then a nice traverse on the ridge’s east side from the notch to avoid a minor tower and climb back up to regain the ridge at the base of gendarme #3. 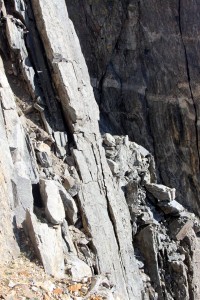 The traverse to gendarme #3 on the ridge’s east side

Gendarme #3 provided some exciting low 5th class, potentially 5.4, climbing up a right (west)facing dihedral for about 20′. There were some slings around a rock at the top of gendarme #3 as I would definitely rap this pitch if going south to north. 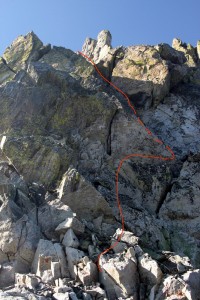 Our route up gendarme #3 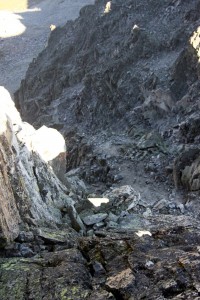 The downclimb off of gendarme #3 was pretty fun and pretty steep. This led us to the base of the fun looking knife-edge ridge section. 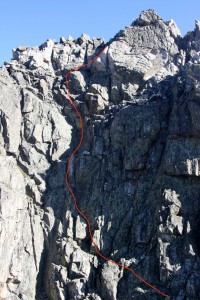 The dicey downclimb we did off of gendarme #3 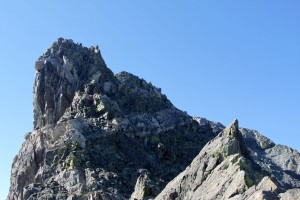 J on the knife-edge ridge

Its completely unnecessary to top out on gendarme #4 as the route from the north & west to its top is very loose and steep. However, once you pass gendarme #4 to its right (west), you can scramble around on class 3/4 from the south to its summit. 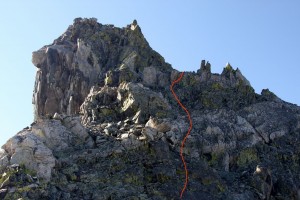 Our route up to the right of gendarme #4 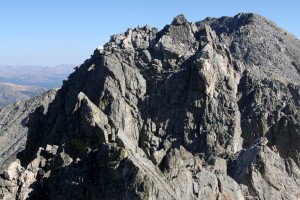 We did scramble up to the top of gendarme #4 primarily to get a preview of the crux of the route, gendarme #5. I had read in Cooper’s book that this was likely a 5.7 finger crack, though not your typical 5.7 trad crack at your local crag. As I found out, loose holds abound this crack system and anything is on the verge of pulling out. However, the pro is fairly good and I was able to place 4 cams, I believe, up to the marked belay station. True to what I had read, it felt like a 5.7. Also, a 30m, 8mm rope was just enough to get me to the belay ledge. 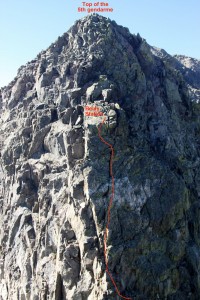 Our route up the 5.7 crack system of gendarme #5 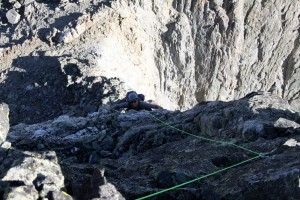 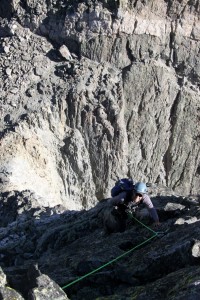 Now, in retrospect, and as we would recommend to anyone going north to south, stay roped up to the top of gendarme #5. We de-roped because the remaining climbing to the top seemed reasonable and not all that steep. We were wrong and half way up, it turned sketchy pretty fast and downclimbing was not an option. We topped out on gendarme #5 just fine but kicking ourselves for not staying roped up. I think there are a few places for some reasonable, perhaps mediocre at best, protection for this last 30′ to the top of gendarme #5. If going south to north, I believe you would need to make (2) rappels down gendarme #5. You would need a 60m rope for the rap from our belay ledge to the base of the gendarme as my 30m barely was enough one way. 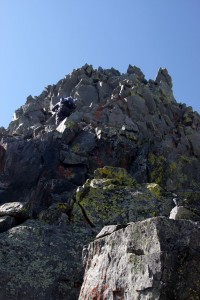 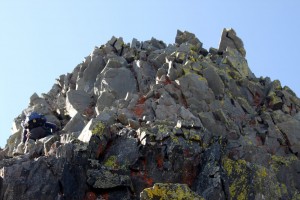 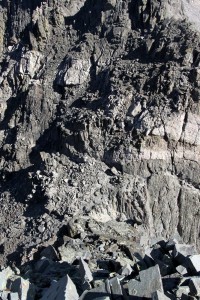 Looking down from the top of gendarme #5 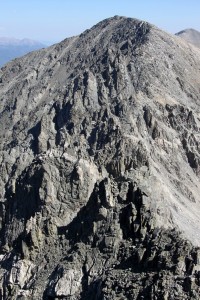 We then scrambled up to the summit of Fletcher Mtn over much easier terrain (class 2+). 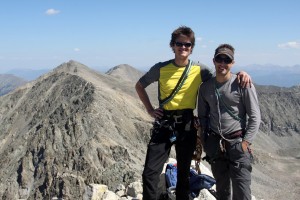 The first half of the traverse to Drift Peak from Fletcher Mtn is nothing more than class 2 hiking. 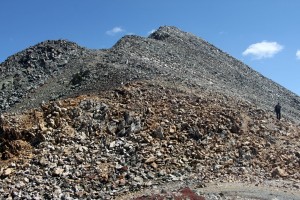 Descending to the Fletch-Drift traverse low point (Fletcher Mtn behind)

We then came upon a 20′ shear drop that we didn’t feel comfortable downclimbing, so we set up a quick rap. There may have been a downclimable route around, but honestly this was quicker and we didn’t look too long. 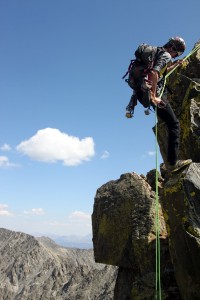 It was then pretty easy class 2+ scrambling on the ridge proper to the summit of Drift from the notch. 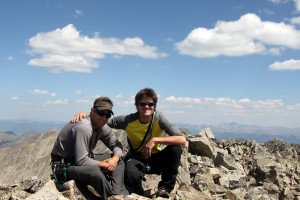 J & I on the summit of Drift Peak

It took J & I right at 3 hrs and 45 minutes for the traverse from the summit of Atlantic to Drift including 25 min or so on top of Fletcher for some lunch and views, so not all that bad. We then descended Drift’s west ridge, aka Villa Ridge, which I had climbed this past winter and which I defintely prefer to descend in the snow. The loose and sharp rock really put a hurting on the bottoms of my feet. We then arrived back at the car around 2:30pm and reflected on a great 8 hrs up high on an awesome traverse. Even though the route is definitely loose and perhaps more dangerous than other traverses in the Gores or elsewhere, it is worthwhile for those seeking this kind of excitement. I hope these pics and route information help others plan their own Mayflower Gulch Grand Traverse.