I at least wanted to get one winter 14er in this year and always had my eye on our 2nd tallest peak in Colorado, Mt. Massive (14,421′). It has a nice winter route up the east ridge at about 15 miles roundtrip and 5,000′ of vertical gain that has little avalanche danger. I had always thought the broad east face would be a nice ski descent after a climb of the east ridge, but honestly the chance of having skiable snow that is fun in the middle of winter on a 14er above treeline is not usually very high. The snow high up on 14ers in winter is typically hard, windblasted sastrugi to the point of being “break your leg” snow. I recruited Reid and J to go for an attempt on Superbowl Sunday, February 5. J and I met Reid at the Leadville Fish Hatchery trailhead around 7am and we were skinning by 7:30am. We had a great broken trail to follow really all the way to the Highline Trail / CO Trail intersection and then we followed a lone snowhshoer’s tracks for another 2 miles to the east ridge at treeline. The weather forecast had not called for much wind, but it sure was whipping by the time we reached treeline. We could tell it was getting stronger and more sustained as the day progressed. We skinned across the large plateau east of the significant false summit (13,500′) along the prominent east ridge. Reid and I left our skis at around 13,200′ as we felt it was pointless (at least for us) to carry them any further since the skiing would be pretty horrific on the way down. We all topped out on the false summit with still the east ridge to traverse and 900′ of elevation gain to the summit and we were almost literally getting blown over. It was not very pleasant especially with us trying to climb into the sustained west wind. We called it, turned around, and tried to somewhat enjoy a horrible ski back down to treeline. 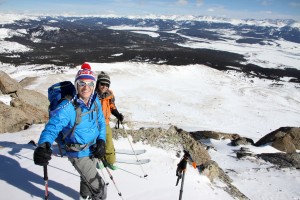 Near our highpoint that Superbowl Sunday around 13,500′ along Massive’s east ridge

Reid on the descent into treeline. The wind can be seen blowing snow all around and above

Once we hit the trail system below, it was a “luge-type” ski out a few miles back to the trailhead. I was definitely a bit disappointed mainly because it was such a sunny day otherwise! But, a day in the hills beats just about anything else and it was good to get out. We were back in Edwards by 2:30pm.

I bugged J to go back with me the following week (unfortunately, Reid, could not go) and with a bluebird spectacular day forecasted for February 15, I picked J up at 5am at the Active Energies office in Minturn and we beelined for the Fish Hatchery trailhead.  Moving around 6:30am in about -5 F air temperature, we skinned along a snowshoe track for 3 miles to the Highline Trail / CO Trail intersection as before. From then on, we’d be breaking trail and navigating another few miles to treeline at the start of the east ridge because of the big storm the previous weekend. J and I moved pretty fast with me breaking trail to treeline and doing the best navigating I could do and we took more of a direct line off the Highline Trail straight to the east ridge proper. It was so nice to hear absolutely no wind and feel the sun’s radiance. It warmed up pretty fast and we were getting hot by the time we were skinning across the open plateau, which this time around was a pleasant skin in nice powder above all of the wind blown tundra below. 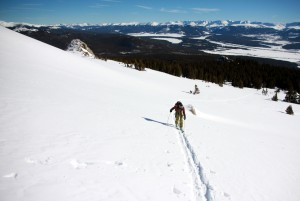 J skinning up above treeline

We skinned as far as we could to about 13,400′ and then put the skis on our packs and started booting up in the new snow. I broke trail up to a notch in the larger rock formation along the east ridge and then J took over. 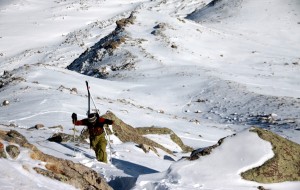 Once we hit the now well-defined east ridge, we made our way up and over some minor bumps and then up the final 600′ headwall to the summit. 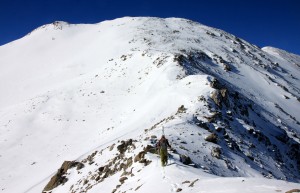 J along the well-defined east ridge with the summit ahead 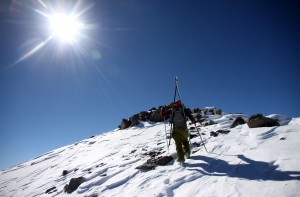 J making the final steps to the summit

We topped out 10 minutes to noon and enjoyed a completely windless Colorado 14er winter summit. It was wonderful. We were now certainly glad we came back to do this peak this day for sure and not the previous week.

We stayed up top for 20 minutes or so and then decided to ski the east face directly from the summit as it looked pretty darn good. From a week and a half earlier, we knew it was a good 8″ of fun snow on top of hard, wind compacted glacier ice. After unthawing my NTN tele bindings on my skis so they would accept my boots, J took off and then me after him. They were some awesome turns. Best I’ve had on a 14er outside of spring ski season, but this time in powder! 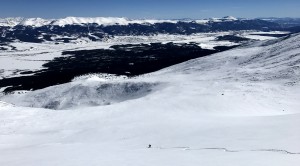 Me carving some tele turns on the wide open face. Photo by J

Our turns on the upper face from the summit

We traversed back over to the top of the false summit on the east ridge itself at 13,500′ and skied what J had skied a week and a half prior. Only then, what he skied was awful wind-affected ice. Now, it was powder. 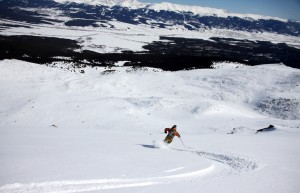 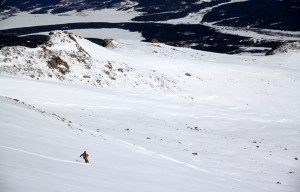 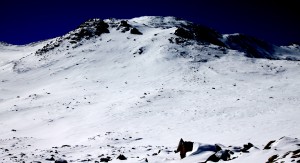 Our turns lower down heading into treeline. Such great snow

We skied great snow back into treeline and then because of the warm snow down low combined with our very cold skis, the snow was sticking to the bottoms of our skis and we couldn’t move. J had wax and after we waxed the bottom of our skis, we glided along just fine. We were back at my car by 2pm for less than 2 hours down. What a great 7.5 hrs up on Massive it was.

J took a short video of me skiing the upper east face of Massive: