My good buddy Jesse Hill and myself spent an evening, night, and a half day or so this past weekend up in the beautiful Capitol Creek Valley. We were both so excited and a bit anxious about attempting to climb the spectacular Northwest Buttress on the 14er Capitol Peak. Its a route I had long wanted to try and climb. Climbers say its one of the better mountaineering routes on a 14er in the state. Having seen it now up close and personal, I would have to agree. The first pitch is 5.9 albeit at 12,500′ up a traversing crack system for a good 120′. The 2nd pitch is a long 5.8 chimney leading to easier (4th class) ground. 500′ or so of solid 4th class scrambling leads to the right (west) of Unicorn Spire from where low 5th class simul climbing typically ensues for several hundred feet up to a saddle. A final 5.7 pitch leads to 4th class scrambling to the summit. Descent is via the standard northeast “knife-edge” ridge route. Here is an overview of the route drawn by Stich on MountainProject: 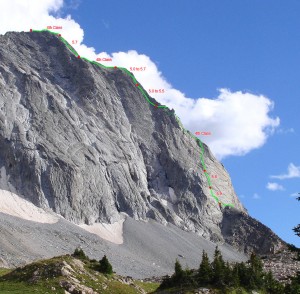 I had been up Capitol three times all via the standard route, which in itself is a classic route very worthy of all the hype. Jesse had climbed Capitol maybe 11 years ago and was excited to go back. We departed Edwards around 3pm on Friday afternoon and were hiking by 5pm on the Capitol Ditch Trail into the Capitol Creek Valley. Unfortunately, it was lightly raining on us the entire 6.5 mile backpack into Capitol Lake (11,500′). 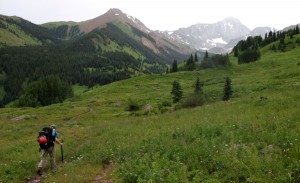 Jesse hiking into Capitol Lake on a dreary Friday evening

It never even approached to crossing our minds that this rain was doing much more damage up high on our intended route, i.e. drenching the route and making the 5.8 chimney a small stream. What we didn’t know at the time didn’t bring us down, so we enjoyed the pack into the valley with good conversation despite the rain. We arrived at the lake 3 hours later right at 8pm and quickly found a site to set up the tent to get out of the rain. However, as soon as we put down our packs, the rain stopped and the skies cleared. Jesse went to filter water while I took pictures of Capitol’s north face in the alpenglow. That site never gets old. 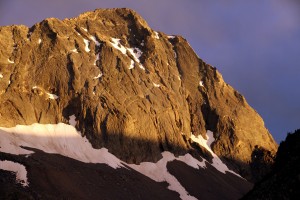 Alpenglow on Capitol’s north face. The Northwest Buttress route is the right skyline

I ate my burrito while Jesse cooked some Mountain House and we got in our sleeping bags around 9:30pm. I was still chilled a bit though warmed up within the warm confines of my zero degree bag. I slept horrible that night. I think it was a combination of using the climbing rope for my pillow, which in turn gave me a headache and hurt my neck, and a big root right under my pad. Anyway, I was a zombie at 4am, but after some coffee I was fired up to go. We left the tent with harnesses on and geared up around 5am. It was a nice hike up to Capitol Pass at just over 12,000′ and took us about 40 minutes. We then began the talus scramble up the steeper ground to the base of the technical pitches up the Northwest Buttress just as it began to get light enough out to see our surroundings. 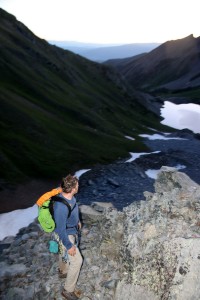 Jesse on the talus cone with Capitol Lake behind

We were excited. However, upon seeing the large black streaks drenching over the 5.9 crack originating from the 5.8 chimney, we paused for a moment. We thought it may just be a stain from previous water and the rock still dry. As we got right up on the face, we could see it was running water and the pitches were wet. Not ideal and very disappointing.

The upper half of the 1st 5.9 pitch was drenched from the previous day’s rain

We discussed things a bit and decided to give the 1st pitch a go primarily get a good look at the 5.8 chimney 2nd pitch. We traversed east out the small ledge to the base of the 5.9 crack. I racked up and Jesse belayed me on lead of the awesome finger crack start. 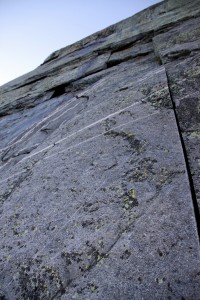 My finger crack start to the 1st pitch 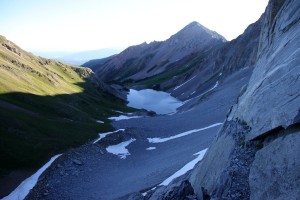 The views were great from the small ledge

I believe there is an easier start located about 10′ left (east) of the finger crack I climbed. I worked my way up crack system traversing left placing a few cams, clipping an old stuck hex and a piton, and pulled the roof to a good stance about 60′ up from Jesse where an old bolt was located on the face above. 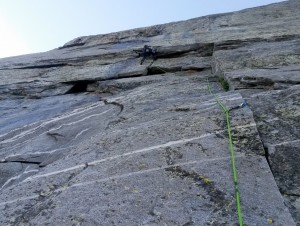 Me pulling the roof on the 5.9 1st pitch. Photo by Jesse

A leftward trending off width crack leading to the final vertical finger crack to the anchors was the 2nd half of the 1st pitch and yet to come from where I stood above the roof. This is where the water was drenching the route. Instead of continuing on to the anchors, I decided to lower off the piton and hex below me. I could see the 5.8 chimney well from my position and there was a small waterfall pouring over the crux bulge to get into the 5.8 chimney above the anchors for the 1st pitch. If I had continued onto the anchors, I don’t believe I could have rapped back down to Jesse with a single rope, i.e. the pitch was too long. Ugh, I was gutted lowering back down collecting my gear. Honestly, the water issue and potential wetness of the pitches after a rainstorm was something I hadn’t remotely considered. There was a couple from Carbondale who had dayhiked in from the trailhead that morning arriving at the base of the technical pitches as I lowered down. They seemed deflated as they looked at the water on the route. They were gunning for the 5.10 start called Early Times, which seemed to be very wet and slick as well. We started down the talus cone back to Capitol Pass occasionally glancing back at the duo trying to figure out the drenched 5.10 dihedral start to Early Times. The fellow was on a ledge trying to figure out how to get into the wet dihedral for probably 30 minutes. I am not sure if they ever figured it out. We lost sight of them soon enough. 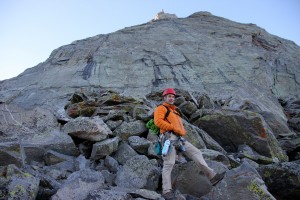 I labelled the 1st two pitches of Northwest Buttress route 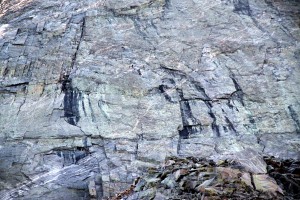 The fellow can be seen just slightly down and right of center trying to figure out the black stained (wet) entrance to the dihedral on the 5.10 start

The Northwest Buttress from Capitol Pass 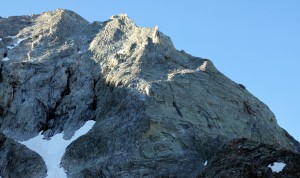 One more of the Northwest Buttress on the descent

We arrived back at our tent by 8:15am and I was itching to do something else. I didn’t really care to go up the standard knife-edge route on Capitol again, but I had never been up the adjacent 13er Mt. Daly and so that was a plan. Jesse decided to nake a nap in the tent and chill at camp while I went solo up Mt. Daly. I was especially looking forward to the views of Capitol from the Daly summit. 1000′ of nice trail brought me to the Capitol/Daly saddle and I turned left and started up the south ridge of Daly initially bypassing some 5th class looking towers on the left (east) side via steep grassy ramps. I then scrambled to the ridge proper and went over a few loose towers to a small saddle and then continued on easy 3rd class scrambling to the mellow upper slopes. 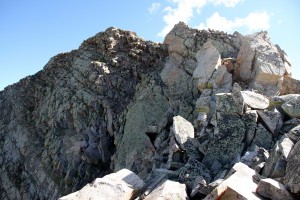 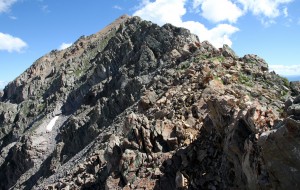 I arrived on Daly’s 13,300′ summit about an hour and 15 minutes after leaving camp and the views were wonderful. Capitol’s Northwest Buttress looked so amazing from this vantage point.

The backside of Mt. Sopris from Daly’s summit 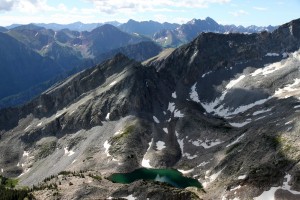 Moon Lake and the Elk Range

Capitol Peak and its Northwest Buttress forming its right skyline 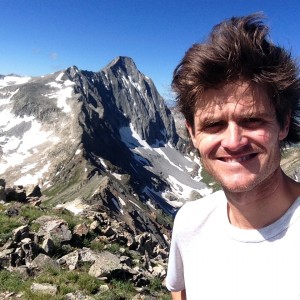 Mt. Daly is a nice destination in itself

After chatting with my dad and a good 15-20 minutes up top, I descended Daly’s south ridge back to the Capitol/Daly saddle and then down the switchbacks and was back at camp just shy of 11am. Jesse had taken down the tent and we departed camp by about noon to make the pack out. We arrived back at the trailhead around 2:30pm and boogied on home after stopping for a coffee in Basalt. We reflected on the decision to bail and considered it the safe thing to do. There is a reason we try and not rock climb in the rain 🙂 Climbing 4th class or even low 5th class on wet rock is one thing. But, when you are trying to climb upper 5th class pitches on wet rock, things are a bit different and things become incredibly slick, tough, and unsafe. Chalk the trip up to some good recon and seeing the Northwest Buttress up close and personal. One thing this trip did was amplify my desire to climb this route. Maybe we’ll give it another go come early fall when the weather tends to be much drier. 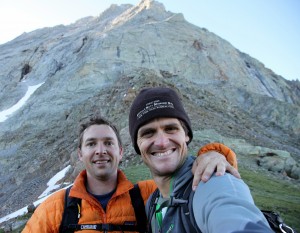 We shall be back!

And, of course a few Sawyer pictures to end on: 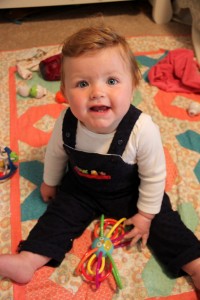 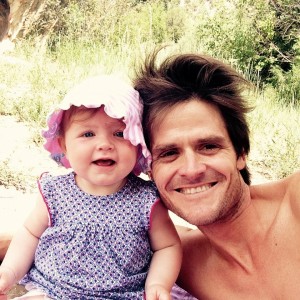