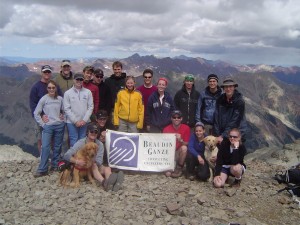 I then learned there was another 14er next to Castle Peak called Conundrum Peak (14,060′). However, back in those days Conundrum was not recognized as an official 14er of the list of 54 due to it not rising 300′ above the connecting saddle with its higher neighbor, Castle Peak. These days, I believe Conundrum is generally included in the 14er list. Rainier and I ventured up high into Montenzuma Basin in the spring of 2006 and climbed Conundrum just the two of us. 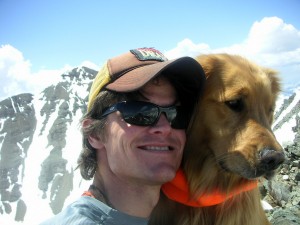 In late June of 2008, Kristine was on her quest to complete the Colorado 14ers and so we all went back up into Montezuma Basin and climbed both 14ers. We took more of a sporty line up Conundrum Peak this time via the steeper Conundrum Couloir. After we summitted Conundrum, we did the fairly mellow traverse over to Castle Peak. Montezuma Basin offers wonderful skiing and we skied from about 13,500′ all the way back down to the truck. It was a great day. 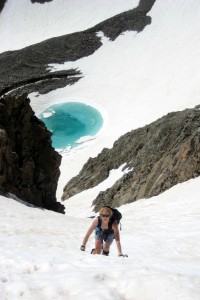 Kristine nearing the top of the Conundrum Couloir 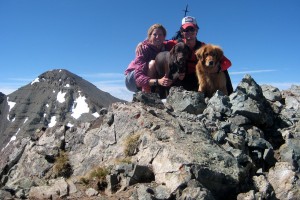 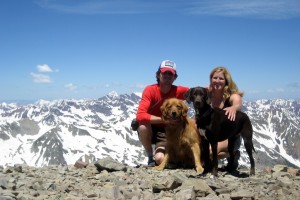 I’ve been skiing over in Montezuma Basin a few times since 2008 but never to go climb those two 14ers. My friend Natalie Moran is on her winter 14er quest and asked me if I would like to join her on these two. After our recent fun climb up Mt. Sneffels two weeks prior, I was itching to get back up on some peaks as well. And, the weather has been wonderful from a winter climbing perspective., i.e. not much recent snow at all leaving stable snow conditions. Another friend of Natalie’s, Greg from Crested Butte, joined us as well and turns out that these two 14ers were still left on his winter 14er list. Greg only has 6 or so more winter 14ers to have climbed all the 14ers in winter. Pretty amazing stuff. Plus, Greg is one of the fastest people I have climbed with no doubt. I drove over to Aspen and turned onto the dark Castle Creek Road, went south to Ashcroft and the winter road closure, and parked next to Natalie’s car around 10:30pm. In winter, the route starts much lower with much more distance and vertical gain to climb than in the summer. I believe the roundtrip stats are around 5,500′ and 16 miles in winter for both 14ers. You can cut that in half or more in the summer given how far you can drive up the 4WD mining road in Montezuma Basin. After a rough and very short night’s rest in the back of Kristine’s Subaru Impreza, in which I certainly did not fit, we woke up at 3:15am and got geared up. Greg showed up at our cars and we all began up the road at around 4:15am with Natalie and I on our skis and Greg on foot with his snowshoes on his pack. We made good time the first few miles and eventually reached the point on the road where I had always driven my truck just before the Pearl Pass turnoff. Soon after the morning colors began to light the sky we entered Montezuma Basin. 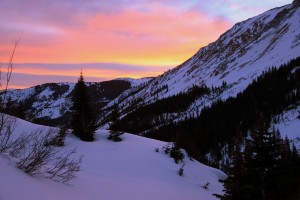 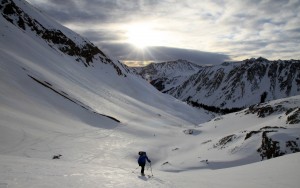 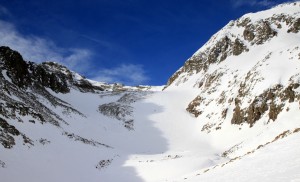 After another hour of skinning, we reached the 12,800′ 4WD summer parking area and looked up at the final headwall to the small glacier below the peaks. We noticed a skin track up this 600′ headwall and went for it only to find out that is was horribly icy and slick from a skinner’s perspective. At this point, I certainly wished I just had crampons or snowshoes to go straight up instead of slipping and struggling up the switchbacks. 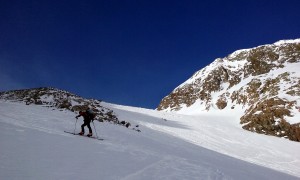 Me skinning up the icy headwall skin track. Photo by Natalie

We regrouped in the high 13,500′ basin below Castle’s north face and Conundrum’s east face. Our plan was to climb to the saddle between the two peaks, but it looked a bit loaded from a snow accumulation perspective and perhaps a bit dangerous climbing it. I was honestly expecting it to be a bit drier. We then chose to climb the steeper north couloir of Castle leaving the skis and snowshoes at the base. The couloir was safe enough but definitely a bit demoralizing as it was littered with scree. Snow only covered a small portion of the couloir and it was a bit unconsolidated at that. Natalie and I were fighting our own battles in that couloir due to climbing in ski boots on loose, steep scree. We soon topped out to find Greg lounging at the notch. After a quick snack and drink, we left for the summit only a few hundred vertical feet above along the northeast ridge. 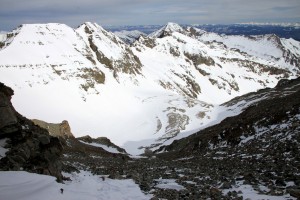 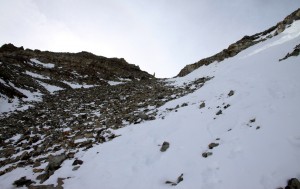 Looking up the couloir at Greg almost to the notch 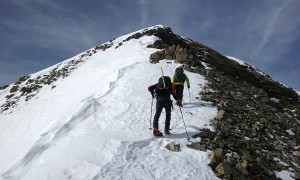 Greg & I going for Castle’s summit. Photo by Natalie 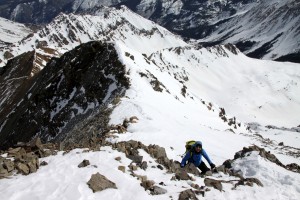 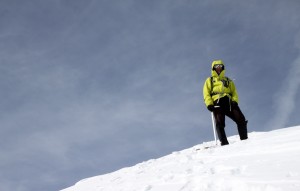 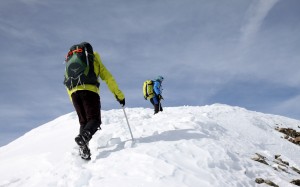 We topped out on Castle around 11:15am making for an ascent time of around 6 hours. After maybe 15 minutes, we started making the traverse over to Conundrum. 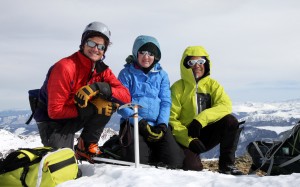 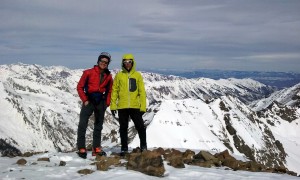 Greg & I on Castle’s summit. Photo by Natalie 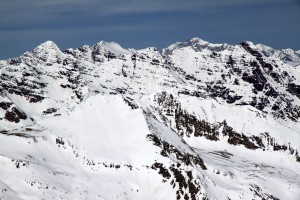 The other 5 rugged Elk Range 14ers to the west

Upon reaching the saddle with Conundrum, we scoped out a possible descent back to the high glacier bowl between the peaks. This same route looked more dangerous from below in the basin a few hours earlier in terms of climbing up it, but now looking down it, it looked like a viable route off these peaks instead of reclimbing Castle and downclimbing its north couloir. Plus, when you are descending a steeper snow route, obviously your time in the danger zone of going down it is much much less than climbing up it. We tested the snow and it definitely appeared stable with no deliberate slabs waiting to rip. We left our packs at the saddle and made the short climb up Conundrum’s south ridge. 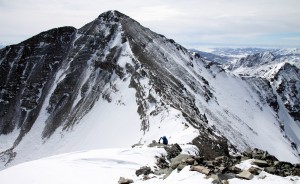 Natalie climbing up Conundrum with Castle behind 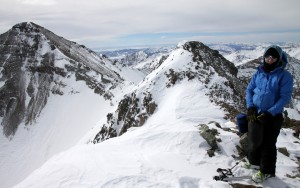 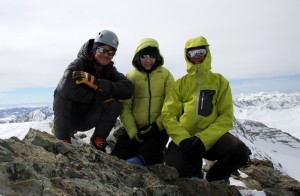 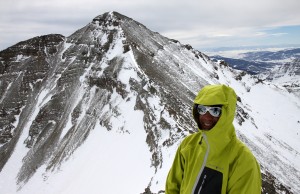 I was happy for Natalie as Conundrum had eluded her on her last winter foray up into Montezuma Basin. Though, at least she was able to summit Castle that day in late January of last year. We descended back to the saddle and one by one descended the steep powdery slopes to below the small cliff band. Then, in order to get down the slope quickly, we each had fun glissades for a few hundred feet. A quick traverse led back over to our skis and snowshoes at the base of Castle’s north couloir. 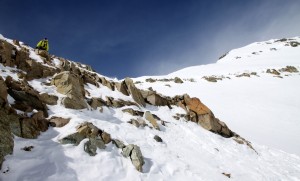 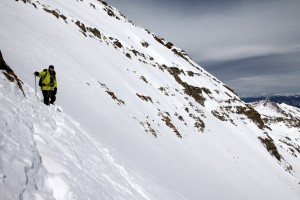 Natalie striking out across the slope below the small cliff band. This slope would have been a fun ski as this was good snow 🙂 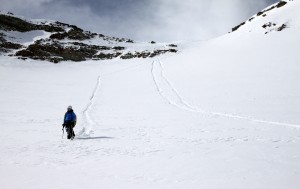 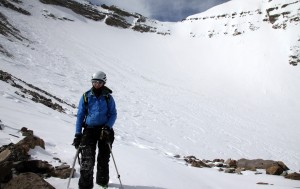 After a snack and some Gatorade, we transitioned back to our skis and shoes and descended. Greg motored ahead while Natalie and I picked our way over to the slope we have both skied before. It was pretty tough snow to ski and I ended up alpining instead of telemarking (as much as I hate to resort to alpine turns) for fear of blowing out my knee. We actually got some nice corn turns down lower in the basin, which was much more enjoyable.

Me skiing the skiable headwall. Photo by Natalie 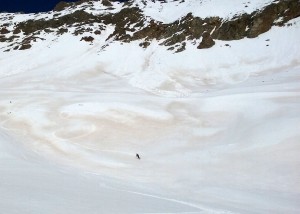 Me dropping my knee lower down in the basin on some nice corn snow. Photo by Natalie 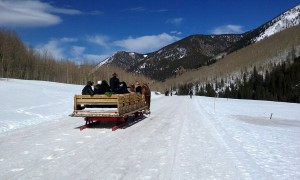 Skate-skiing out the final 2 miles to Ashcroft passing horse-drawn sleighs along the way. Photo by Natalie

Natalie and I skied on out all the way back to the winter road closure at Ashcroft and our cars arriving by 1:45pm making for about a 9.5 hour day. Even though Greg was on snowshoes, he only arrived an hour after we did. He is fast. I had to take off soon after arriving at the cars in order to make a Costco run for the Chalk family on my way home and to catch the Duke-UNC game, of course. A wonderful day out with a fine crew. Happy that Greg and Natalie added more peaks to their winter list and that I could be a part of it. As for the winter 14er list for myself, I need to go back and count (if I am able to) which ones I have done in winter over the past 18 years. I always swore that I was done with lists. However, I guess never say never.