More of a picture journey of our ski tour deep in the Gore Range to ski the elusive Straight Arrow Couloir on Peak H than anything, but in many ways pictures are worth a thousand words 🙂 For those interested, good bud Brian Miller did his typical humorous trip report over at Exploring The Rockies in a writing style that is uniquely his and his alone. All told, it was almost a 12 hour day and approximately 13.9 miles roundtrip with 7,150′ of vertical gain. Not too shabby of a day.

The day started around 4:15am with a 3,500′ vertical gain approach from the Booth Creek Trailhead in Vail to the 12,100′ East Booth Pass. Typically, that kind of gain will already get you to a summit, but we had a long way to go this day. However, we skied powder down from East Booth Pass to Upper Piney Lake at 11,000′. 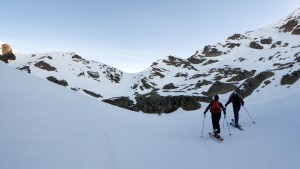 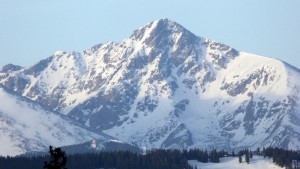 Ben shot this awesome pic of Mt. of the Holy Cross with the top of Chair 3 at Vail visible lower right from East Booth Pass 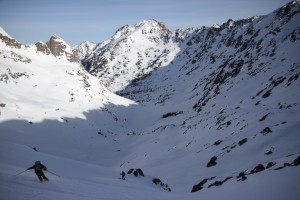 J and Ben skiing down to Upper Piney Lake with our destination, Peak H, in the distance 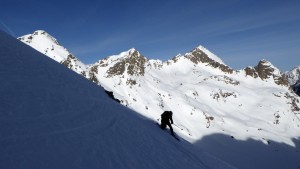 I was able to drop a knee as it was awesome powder off the north side of East Booth Pass! Photo by Ben 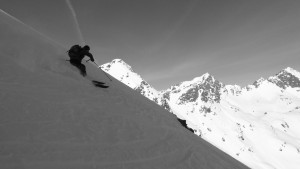 Then, we began the long 2,000’+ ascent up Peak H’s south slopes. The scenery was astounding. I hadn’t been back this deep in the Gore in the snowy months before and it was breathtaking.

J and I skinning up Peak H’s south slopes as far as our skins would allow. Photo by Ben

Me putting the skis on my back. At some point, it became much more efficient to just boot it. Photo by Ben 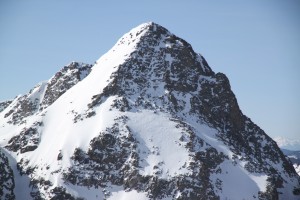 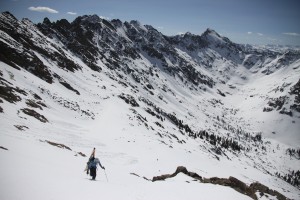 Finally, around 10:45am, we reached the summit of Peak H about 6.5 hours after starting out. 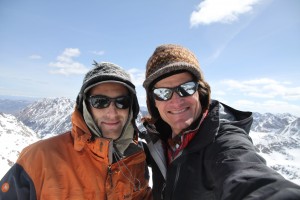 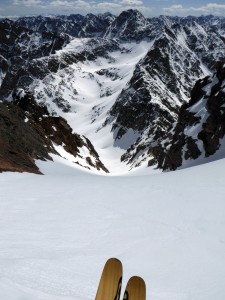 Ben about to drop into the Straight Arrow Couloir with Peak Q in the distance. Photo by Ben 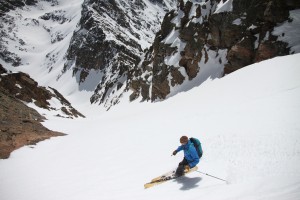 So, while traversing The Saw so many years ago, I honestly couldn’t remember if there was a viable exit from the bottom of Straight Arrow back to The Saw’s ridge proper to get back into the Upper Piney Lake basin. I usually have a good memory of things in the mountains, but this topography escaped me. Nevertheless, Ben decided to ski down about 1,000′ and look at a seemingly viable exit skier’s right. He gave an “all systems go” signal and we skied this great couloir in awesome corn snow. 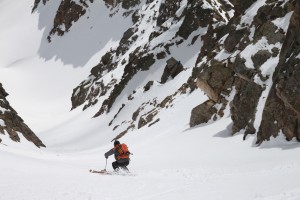 Brian ripping turns as he always does 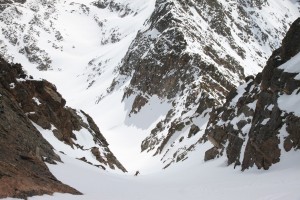 Brian much further down with quite the backdrop 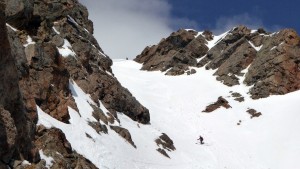 Me loving this couloir while J waits patiently at the top. Photo by Ben 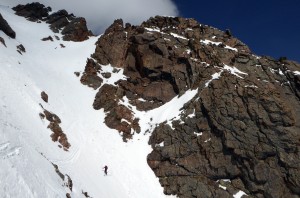 I think this pic makes the couloir appear steeper than it actually is. Photo by Ben

Me loving the tele turns. Photo by Ben 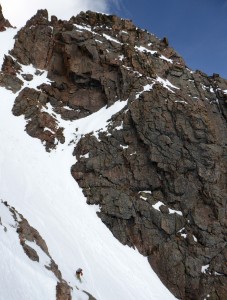 J getting into the business. Photo by Ben 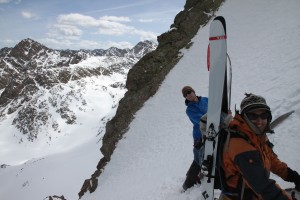 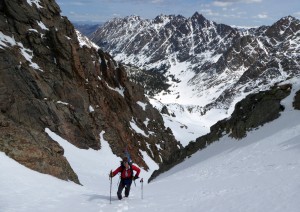 We reached the ridge and after a snack and some fluids we transitioned to ski mode to ski the remainder of Peak H’s south face. I did go over to the low point of The Saw after a few hundred feet of skiing down H’s south face and scoped out the climb up to the saddle from the apron of the Straight Arrow Couloir. Definitely climable. In hindsight, we could have skied a few more hundred vertical down the Straight Arrow and had a decent climb up and out to the saddle. Oh well. Definitely next time 🙂 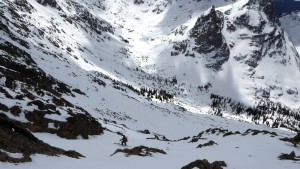 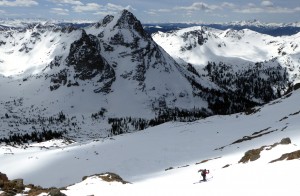 Ben shot me skiing down H with such a gorgeous backdrop here including The Spider and Holy Cross.

And, another one of me skiing down H with the Spider behind. Photo by Ben

We skied as far as we could due south, but really dropped all the way down to Upper Piney Lake yet again. We had over a 1,000′ re-climb back up to East Booth Pass, which definitely caused us to put on the afterburners. 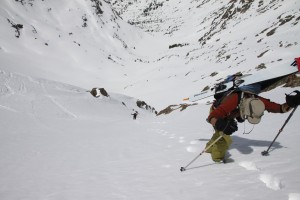 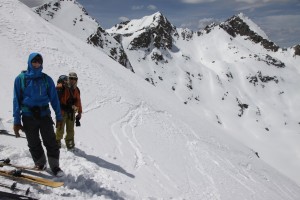 After some lounging, we packed up and skied down the Booth Creek drainage where we still got almost 3,000′ of skiing to well below Booth Falls. Yes, it took some gymnastics lower down but we kept the skis on our feet to where it got unruly and Brian and I called it quits.

Me skiing down the south side of East Booth Pass on perfect corn. Photo by Ben 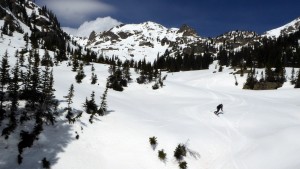 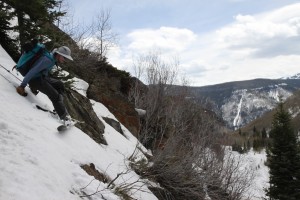 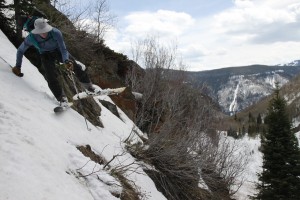 But, Ben, as always, managed to make the turn

Great day out in my favorite range with the biggest Gore snobs I know. Until next time fellas.