I just love spring skiing. Even with the amount of snow we have had this season up to about two weeks ago, the warm temps all last week have put a serious hurting on our snowpack. However, I still think we have a few weekends left yet for some decent lines and spring ski tours.The temps this past weekend were very warm as well not even allowing the snowpack to freeze at night. This typical nightly freeze allows for a safer spring freeze-thaw corn cycle during the morning hours when one would want to ski steeper lines and couloirs.

Having been under the weather all week, I still felt like getting out for a shorter ski tour. So, on Saturday my good bud Mikey and I went and checked out the snowpack on the familiar terrain up on Uneva Peak north of Vail Pass. Any time we can skin from the car is worth it in my eyes. We ended up skiing a steeper gully off Uneva’s south side into the western of the two Uneva bowls, one we rarely venture to during the winter because of the steeper slopes and greater chance for avalanche activity.

Looking down our little gully line into Uneva’s western bowl 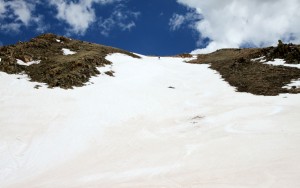 Mikey starting down the gully 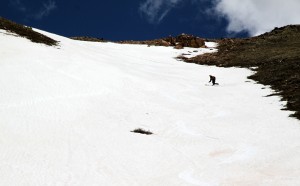 It was a fun albeit short gully down to the dirt-ridden bowl from which we skinned back up to the ridge and skied down the mellower eastern Uneva bowl, which we typically ski several times a year. 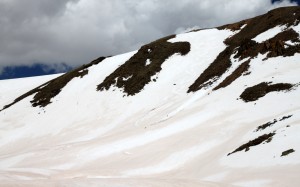 Our tracks down the gully

Mikey skinning back to the ridge 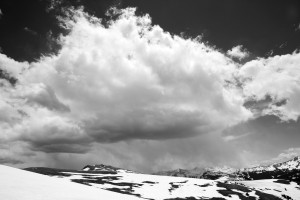 Storm over the Tenmile Range

View west to Mt. of the Holy Cross and its Cross Couloir, which good friends J, Derek, & Brett were skiing the next day. Wish I could have joined them, but being sick all week definitely didn’t put me in prime form for a 30 mile roundtrip expedition. Hopefully, I can get it in a few weeks when Tigiwon Road opens 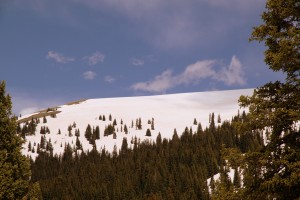 And, the very mellow eastern Uneva bowl we skied out

We were initially thinking of skiing down the north side of the peak, but there was so much avalanche debris and fairly significant cornices, it didn’t look all that safe nor all that fun. A nice 3 hour roundtrip tour up on Uneva was just what the doctor ordered and I felt a lot better afterwards.

A few hour later Kristine, Mikey, and I headed down south of Leadville to camp along County Road 390 at a 14ers.com spring gathering in hopes of skiing the Hopeful Couloir on the high centennial 13er Mt. Hope on Sunday. We found our friends Shawn, Jenn, & canine Fitzy in the dark and met up with friend Natalie who wanted to ski Hope with us the next day. However, after learning of the recent  Hopeful Couloir beta (runnels and avalanche debris) and the non-freezing nature of the snowpack at night, we decided to turn our efforts to Independence Pass and the two 13ers, East & West Geissler Peaks, were at the top of the list. This ski tour of the Geisslers is a local Aspen favorite and is featured in my friends’ Ben & Brian’s new book Climbing and Skiing Colorado’s Mountains: 50 Select Ski Descents. Upon leaving camp around 6am the next morning, we drove up to the top of Indy Pass and down to the Highway 82 pull-off 1.8 miles west of the top of the pass. The weather was really not what was forecasted (sunny and bluebird). It was lightly snowing, the wind was blowing, and extremely overcast. There was even the occasional group that was coming back to the cars after having skinned up the valley for 20 minutes who said they were going for a bike ride instead. Nevertheless, we’ve hardly ever experienced a day in Colorado that is forecasted to be beautiful but never turns bluebird and sunny. As fortune would have it, the sun came out and the clouds parted about 45 minutes later much to all of our relief. 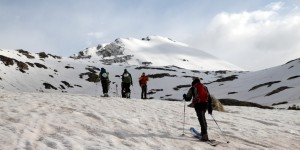 Skinning up the gulch towards Independence Lake. East Geissler’s south face looms above 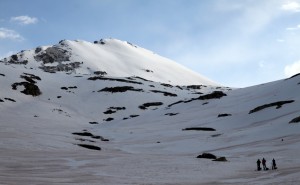 These peaks really are “skier” peaks. So very accessible (when Independence Pass is open) and plenty of skiing can be had from steeper lines to more manageable 35 degree terrain. We decided to go for West Geissler first as the line we would ski is more east facing and would likely soften up first with the morning rays of sun. Kristine, being about 5 months pregnant now, did absolutely amazing and is such a trooper. Everyone was in awe that she was able to climb and ski two 13ers this day. Kudos to her for still wanting to get out and do these kinds of trips all the while growing another human being inside her belly. Amazing, really. 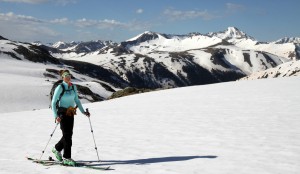 Kristine climbing West Geissler’s east ridge with East Geissler, our next objective, behind 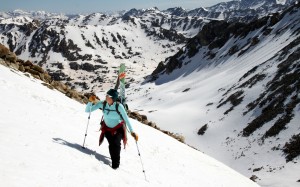 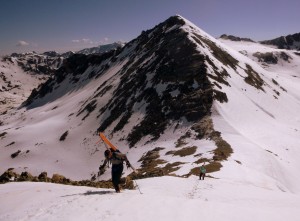 Kristine & I booting up West Geissler. Photo by Natalie

It was a nice morning skin to the saddle between the two Geisslers and then a straightforward bootpack up West Geissler’s east ridge to its summit. It really turned out to be a gorgeous day. 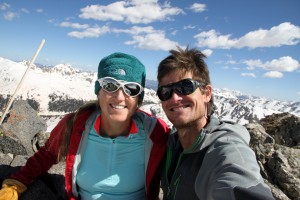 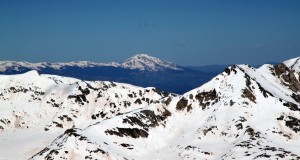 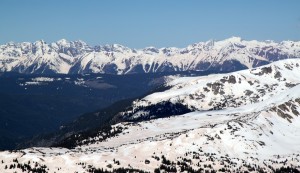 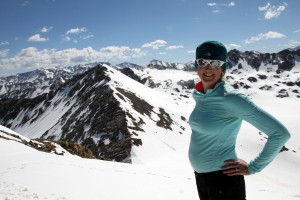 Natalie and new acquaintance Otina decided to ski the much steeper 50+ degree line directly off the summit while the rest of us (having not brought helmets or whippets and my wife being 5 months pregnant) elected to ski the mellower sub 40 degree east-facing slopes after a short ski traverse. It was a fun ski line and the snow was pretty good and soft after a few turns down. 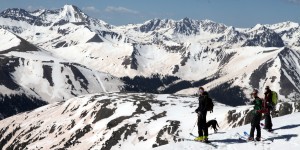 Shawn, Jenn, Mike, & Fitzy at the top of our ski line 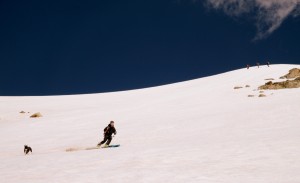 We quickly skied over to the base of East Geissler and began laying down a skin track up its mid 30 degree south face. By this time, the crowds certainly started showing up and I bet at one time there was 20-30 people climbing & skiing East Geissler. 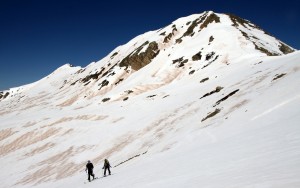 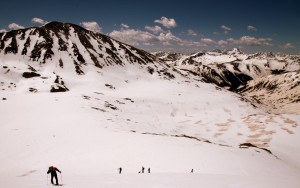 The crew skinning up the south face of East Geissler

We topped out maybe around 11am and enjoyed the sunshine and views despite a semi-stiff breeze. 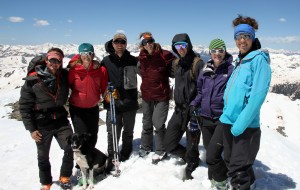 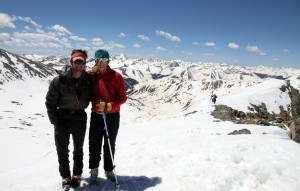 After a few photos we strapped in and skied far skier’s left down the south face of East Geissler where there were no previous ski tracks that day.

Looking down our line off East Geissler. Photo by Natalie

Me skiing down the face. Thanks to Kristine for the pics 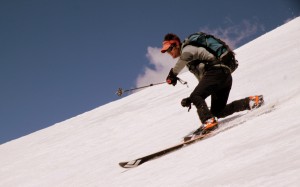 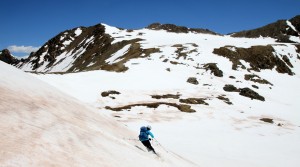 This was really just plain fun skiing and we all skied about 1,200′ down to Independence Lake from where we skied out the gulch back to the cars. The dirt layer was pretty significant in the basin and on several aspects, but we were able to avoid it for the most part on the actual skis themselves. 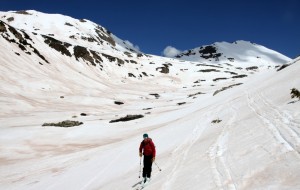 Kristine on the ski out with the Geisslers behind

Back at the cars around 12:30pm, we packed up and headed back home to grab the dogs from our friend Kathryn. A great morning out for us on some new terrain with a good crew. I, for one, am so proud of Kristine and feel so fortunate to be able to do what we love together even while pregnant. Here’s a to a few more weeks of spring ski-mountaineering season!