Well, despite some early spring wet weather, which always seem to coincide with just about every April weekend, the month of May turned generally warm and dry we we were able to get a few spring skis on the books. The weather really heated up in June and a few weeks of downright hot weather was quickly melting the snowpack. Derek sent out an invite to come down to his “neck of the woods” in the Indian Peaks west of Boulder and hit the 13er Paiute Peak (13,088′) he had been wanting to climb & ski. This was also to serve as a prelude to our good friend Jesse Hill’s 16th annual summer solstice party in Wheatridge. J, Kona, & I drove down in Megan’s 1999 Volvo late Friday night to the Brainard Lake winter closure parking lot arriving around 10:30pm. Neither of us (nor Kona) had been in the Indian peaks so this was a new adventure for all of us and worth going east through the “tunnel”.

The Indian Peark as seen from Brainard Lake on our way out later in the day. Pauite’s snowy southeast face is on the far right

Derek & his Australian Shepherd, Maude, were already there as was Derek’s friend, Russell, and our friend, Natalie Moran, all in their respective cars. J, Kona, & I slept in our bags next to the Volvo and each had a restless few hours mainly due to the mosquitos nipping at our heads every so often. I think Kona & I maybe got one good hour of sleep before my alarm went off at 3:30am. More good friends Mikey Santoro & Mr. Joel Gratz himself arrived at around 4:15am. Several folks had brought their bikes for the 3 mile ride up the paved road to the Mitchell Lake TH past Brainard Lake, but J, Derek, me, Maude, & Kona walked it. We regrouped with the bikers about an hour later at the Mitchell Lake TH and packed skis and boots on our backs to start up the trail in trail shoes. Natalie, Russell, Mikey, & Joel had locked their bikes at the TH. We hiked maybe a mile before the snow became a bit too much and we all decided to trade our trail shoes for ski boots, skins, & skis. Somehow, we ended up losing the already faint trail among the snowdrifts and ended up doing quite bit of tedious bushwhacking as well as shouldering skis across marshes and small creeks and boulder fields for a few hours. It was inefficient to say the least 🙂 Nevertheless, it was what it was and we persevered. At around 8am, we reached Blue Lake. We briefly considered going to ski nearby Mt. Toll as Pauite was more distance and Derek skied Toll only a few weeks prior, but in the end no one had ventured to Pauite and that was the goal. 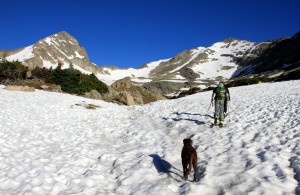 Making our way to Pauite (right). Mt. Toll is on the left 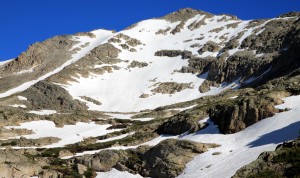 Getting closer to Pauite. Its steeper southeast face is dead ahead with the Curvaceous Couloir on its right (left in pic)

After some more shouldering of skis up boulder fields interspersed by snowfields, we finally reached the 11,800′ high lake below Pauite’s steep southeast face. The intended climbing & ski route called the Curvaceous Couloir was melted out at the bottom and not continuous, but we all decided to climb it anyway and ski either the couloir or the steeper southeast face back to the small lake at 11,800′. 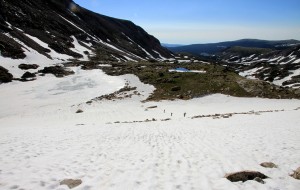 Booting up the lower snowfield above the 11,800′ lake 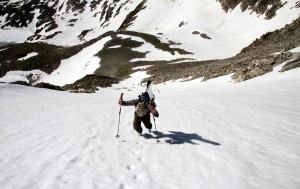 J towards the top of the Curvacous Couloir 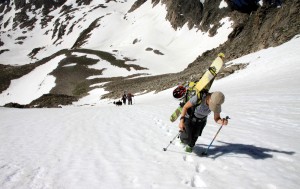 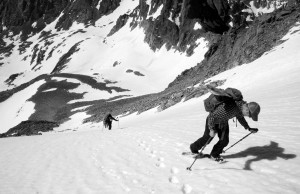 Mikey still in his snowshoes on 40 degree snow 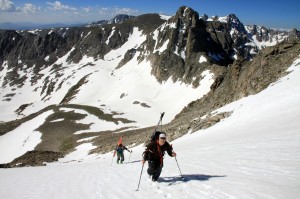 Derek & Russell with Mt. Toll behind

We left our skis at maybe 12,900′ where the snow ran out and a few of us scrambled up to the rocky summit arriving sometime late morning (honestly cannot remember when). The view of the Indian Peaks were spectacular and all new scenery for me, J, Mike, Natalie, & Kona. We saw a familiar friend to the north in Longs Peak. 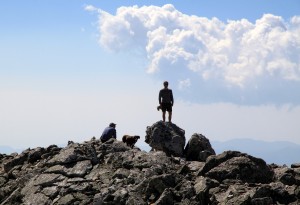 J on top of the summit block of Pauite

Mike on top of Pauite 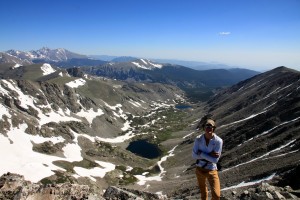 Me with Longs Peak in the far distance on the left 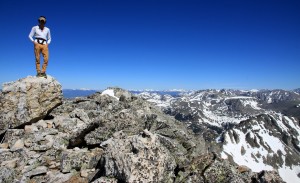 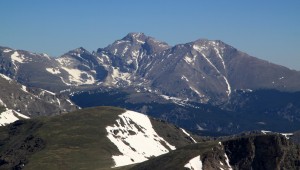 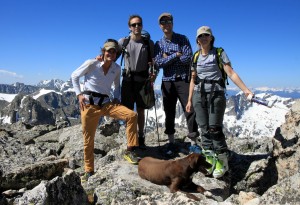 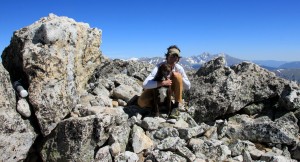 After maybe 20 minutes, we scrambled down the 200′ to our skis and Derek, Maude, Joel, & Russell. A few of us elected to ski the Curvaceous Couloir, but several of us went over to the steeper southeast face to check it out. J guinea-pigged the face and made it safely to the bottom. Russell went next and after Natalie and I saw him safe with J about 1,000 below, I went and Kona followed. It definitely felt steep for me maybe partially because I was nervous for Kona as she kept sliding some and then arresting herself. I was nervous for her as I didn’t want her to get in an uncontrolled slide over a rock band. She did very well, though, and Natalie came down behind us making great turns on what felt like a 45 degree upper face. 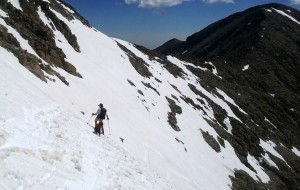 Me & Kona making our way out onto the face. Photo by Natalie

Me & Kona on the upper face. Photo by Natalie 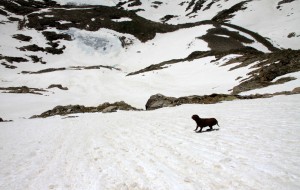 Kona on the upper face with the 11,800′ frozen lake below. J & Russell can be seen way down on the right as well 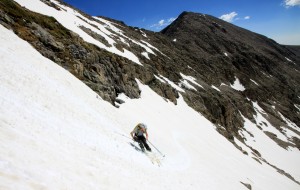 Natalie in good form with Mt. Audobahn behind 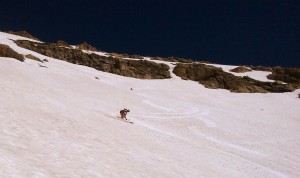 Me lower down with Kona a bit behind me. Photo by Natalie 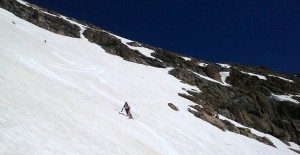 The lower face afforded much more fun turns for me

Derek, Maude, Joel, & Mikey all skied the Curvaceous Couloir, which I am sure was super fun. I sort wished I had skied that line instead of the southeast face, but c’est la vie.

We all regrouped at the 11,800′ lake and continued the long, inefficient descent all the way back to Brainard Lake with likely 20 transitions between skiing, shouldering the skis, skis on packs, and skis and boots on our packs in exchange for just trail shoes. 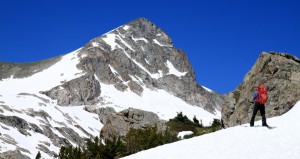 One last look for Mikey of Mt. Toll

Back to Brainard Lake around maybe 1:30pm, the bikers left us walkers in the dust, but after only maybe walking 1/3 of the paved road down to the winter closure, Mikey came to pick me, Kona, Derek, Maude, & J up in his pickup. That was a time savior for sure as we needed to get to Jesse’s summer solstice party! A quick bite to eat in Boulder, J, Kona, & I met Kristine, Sawyer, Rainier, Megan, & Raina at Jesse’s house in Denver. Again, Jesse outdid himself and it was all outstanding as usual. Amazing he has done this for 16 years. He really has transitioned the party with the times. 16 years ago it was basically a big frat party at their “Brady Bunch” type house in Lakewood with 150 single and young early 20 somethings. Now, its much more low-key and family-oriented with a bouncy castle for kids, games, the street is blocked off, etc. But, Jesse still does the festival of meats, a whole pig, beverages, etc as he has always done. That has not changed. Rainier has been to 13 of the summer solstice parties. I have been to 12, I believe. Rainie has 1 up on me because we climbed Denali in June 2007 and were just getting off the mountain. But, Rainie sure didn’t miss the party! J flew home immediately after Denali while Kristine & I stayed in Anchorage to make the party. That is dedication.

Anyway, I highly doubt I will ski something else this spring. Just not enough now down low to make it worthwhile (for me) to haul skis that far. Plus, its full-on summer now and time for summer activities. Thanks to Kona, Derek, Maude, Mikey, J, Joel, Natalie, & Russell for a fun and adventurous final spring ski in the Indian Peaks.