Our 2017 Hardman Hut trip wasn’t as “hard” as the previous year’s Hardman 2016 (maybe more of a “Softman” hut trip), but was loads of fun all the same. Jesse Hill booked and organized the huts and meals as  he did last year and yet again outdid himself. This year’s Hardman was in the beautiful Elk Range. Most of the gents skinned in the short 2.5 miles to the Markley Hut from Ashcroft Thursday afternoon. J, Brett, and I skinned in around 6pm arriving just in time for taco dinner at 7pm after a few inches of fresh snow had fell.

J and Brett on the approach to the Markley Hut

Joel, Derek, Jesse, & Mikey made some early morning runs on the other side of Express Creek in about 9″ of fresh powder while the rest of us made breakfast and drank coffee.

The next morning before departing to the Goodwin Greene Hut

On Friday around noon we departed for the Goodwin Greene Hut. It was a nice skin up the road breaking trail a few miles before heading north of a drainage and over the Richmond Ridge plateau. 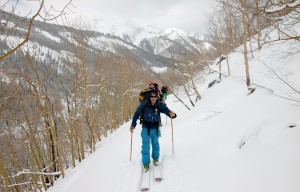 Joel and crew skinning up the Express Creek drainage

Nico plowing ahead in front of me here in this pic. Photo by Joel 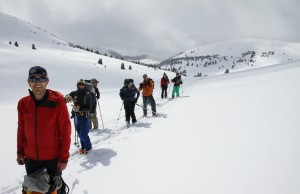 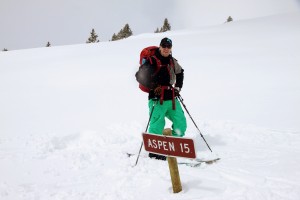 A little bit of navigating over the broad, treeless plateau was necessary until we dropped a few hundred vertical down into the Difficult Creek drainage on the northeast side of Gold Hill to the hut.

The boys heading across the alpine plateau

It took us about 3 hours from the Markley to the Goodwin Greene hut, so not too bad. We had two nights at the Goodwin Greene hut, which was extra nice since we could ski tour all around the hut the following day (Saturday). I slept right next to the wood stove and with Mikey stoking it all night, it was an oven in there 🙂 J and I were sweating going to sleep. Anyway, a crew (Nico, Mikey, Brett, Derek, & Joel) went out around 8am to ski the northeast facing glades at the head of the Difficult Creek drainage. The rest of us drank coffee and made breakfast and then we set out to summit Gold Hill and ski down to meet the early crew. The 700′ skin up Gold Hill was fun and we could see the Grand Traverse racers on Richmond Ridge going from Crested Butte to Aspen. 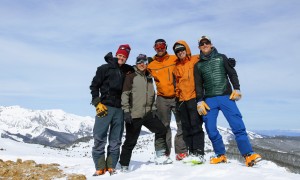 Chuck, J, & I skied a pretty cool north-facing couloir line off the summit ridge down to the early crew while Matt and Jesse skied around. 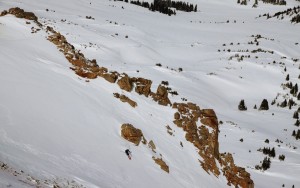 Chuck a bit lower down

We all skied down to the earlier group learning that after 3 laps they were heading back to the hut. Nonetheless, they beat us to the untracked powder on these lower glades. 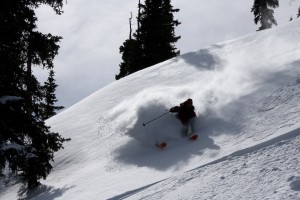 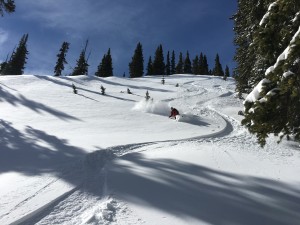 Matt, J, Chuck, and I decided to skin up to another ridge to ski a steeper line through the trees that Chuck spied from Gold Hill.

Skinning up to the ridge with Gold Hill behind. The hut can also be seen in the lower center portion of the photo.

J skling the fun trees back down to Difficult Creek 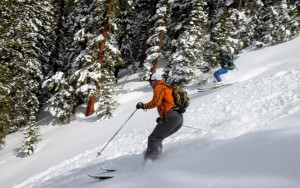 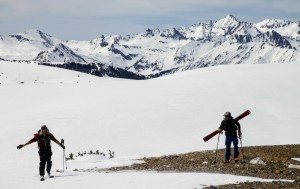 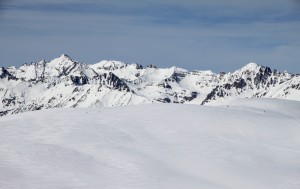 Looking over to 14ers Castle & Conundrum Peaks on the left and high 13er Cathedral Peak on the right from the summit of Gold Hill. Racers can be seen below on Richmond Ridge 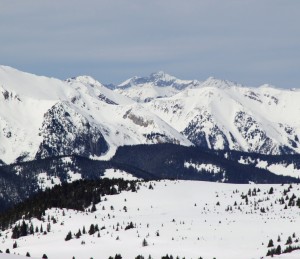 14er Capitol Peak in the distance 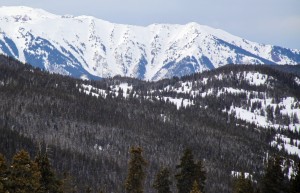 Highland Ridge and Highland Bowl on the far right

In order to ski to the hut, we had to ski the extremely steep & firm northeast face. “Oh well, I will just follow J and Chuck”, I thought. There was one short section of 50 degree snow, but eased to the 40s soon after. Even though the snow was very firm and a bit icy, I’m glad we did it. 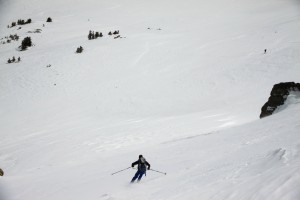 Once back at the hut, we relaxed, I took a snooze, some played cards, etc. I went out later on that afternoon and did one more loop with Derek, Mikey, and Joel of the ridge/tree run to Difficult Creek to cap off the day.

The last supper at Goodwin Greene

A storm came in Saturday late afternoon/evening and visibility was to a minimum on Sunday morning when we were to depart. It was windy and low visibility for sure, but navigation was pretty easy especially since a few of us surveyed the terrain from the Gold Hill summit the previous day. Back to the car in just over 2 hours, we made our way on home. 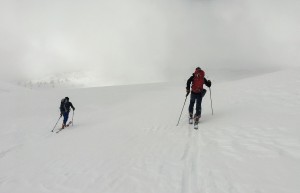 Chuck and I making our way across the Richmond Ridge plateau on Sunday morning. Photo by Joel

Our crew one year older and wiser, but just as giddy to all be together on another Hardman in the mountains