As a Vail local, the more time I spend in the rugged Gore Range, the more appreciative & grateful I am to have these peaks so close to home. After over a decade of driving all over this state to climb 14ers over & over & over again, I think finally I’m more than content at exploring and climbing Gore Peaks for the time being. Also, after our Kilimanjaro climb this August, helping my wife, Kristine, finish climbing all of the 14ers this summer, and with Fall knocking on the door, I am extremely psyched to get back to our local peaks and in the heart of the Gore Range. I’d always wanted to traverse the Ripsaw Ridge from the first time I had heard about it. Upon reading Brian Miller’s (lordhelmut) TR on the Ripsaw from July 2010, I was extra energized to get this traverse. The Ripsaw is a ridge extending from Peak C (as its northern terminus) south to Peak G. However, in theory, this ridge continues south from Peak G onto Peaks H, J, P, West Partner (Peak U), East Partner Peak (Peak V) and so forth. The Ripsaw is a very sustained class 3/4 ridge over several miles where some low class 5 moves are almost unavoidable and typically welcomed in our case to add some excitement. It always seems my initial plan of traverses is a little over ambitious thinking we could do Peak C to West Partner Peak in a day or so…yeah right. But, we did complete the proper part of Ripsaw from Peak C to Peak G. Peak G to West Partner will have to wait for another day. We did the Partner Traverse (East to West Partner) last July 2010. 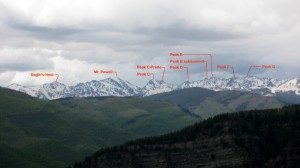 Good buds J, Caleb (RoanMtnMan), & myself backpacked in to the base of Peak C and set up camp on a nice rocky rib in the trees. Having climbed Peak C a few times via its SW couloir, I knew the turnoff pretty well and where we should camp to get an early start up Peak C. Amazingly, on the backpack in, I found my wife’s knit cap on a rock that she must have lost over a year ago on our climb of Mt. Powell when she took a stumble across one of the creeks. 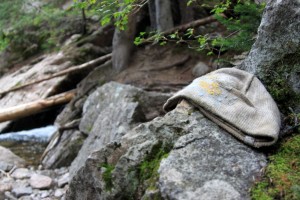 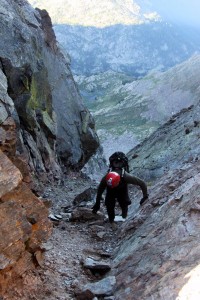 We then reached the notch between Peaks C & C-Prime and took a left up the fun class 4 rock which then turns into class 2/3 rock to Peak C’s summit. 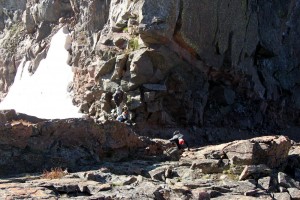 We had a great view of our day’s work of the Ripsaw Ridge to the south. 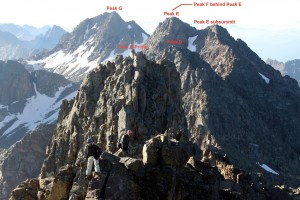 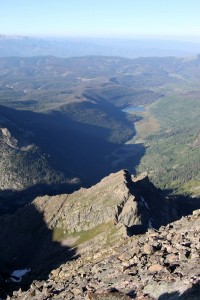 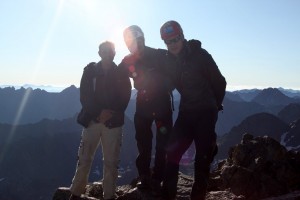 Descending back to the notch between Peaks C & C-Prime, we then climbed down the very loose Peak C SW couloir several hundred feet to the access rock gully up to Peak C-Prime’s south ridge. This access gully is about 1/3 of the way down from the notch between Peaks C & C-Prime. It is loose as well but soon splits and we followed the steeper yet more stable left branch (class 4 rock) to reach a point just south of Peak C-Prime’s summit block. From this point, it is a fun class 3/4 scramble to Peak C-Prime’s summit on its SE face. 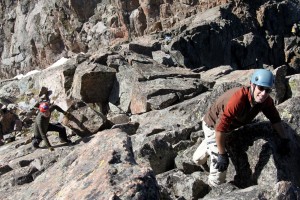 Me sitting on top of Peak C-Prime’s summit block

Once we descended Peak C-Prime’s summit block, the ridge over to Peak D’s summit block is probably the easiest section of the Ripsaw (mostly class 2). 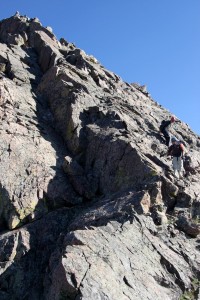 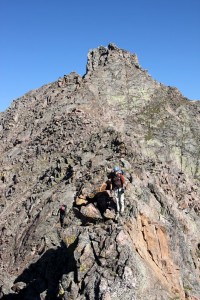 On the ridge to Peak D

Once at the base of Peak D’s summit block, we scrambled up to a fun class 4 dihedral and then skirted a gendarme around to the southwest. 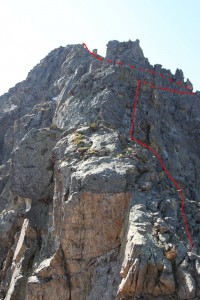 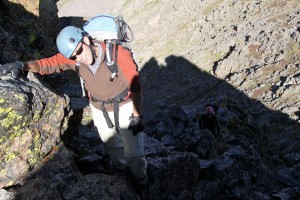 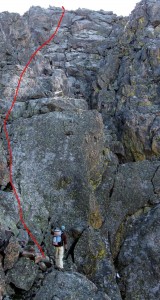 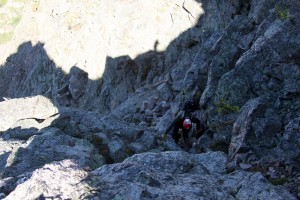 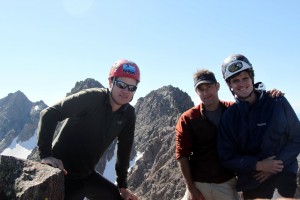 The downclimb from Peak D’s summit to the Peak D/E saddle is fairly straightforward and mostly class 2/3. Once at the lowpoint between Peaks D & E, you can ascend a 5th class chimney for 15′ or descend 50-100 vertical feet to the west and ascend easier terrain. We then ascended up to a highpoint on mostly class 2/3 terrain and skirted another gendarme to the southwest to reach the base of Peak E’s subsummit. Taking Peak E’s subsummit straight on would be well into middle 5th class climbing and so as lordhelmut suggested in his TR, we skirted around to the southwest and ascended class 3/4 rock up a gully to the Peak E subsummit. From Peak E’s subsummit, we descended to the saddle before the final climb up Peak E. The route up Peak E I took was class 4 with maybe a few low 5th class moves but easier class 3 and some class 4 rock is further around to the right or southwest. 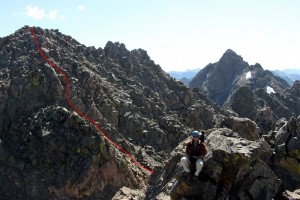 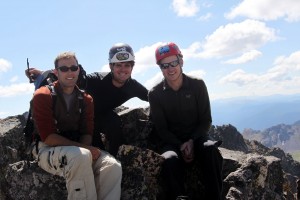 Peak E was the only summit we found with a summit register and the last person who signed in was from October 1, 2010. The person before her was lordhelmut in July 2010. Goes to show how little these peaks are climbed. The traverse from Peak E to Peak F is a bit complex but in general we stayed a hundred or more vertical feet to the ridge’s right (southwest) side and crossed over rock rib after rock rib and into gully after gully. Taking the ridge proper traverse from Peak E to Peak F would be impractical and unrealistic given its multiple mid-high 5th class gendarmes and towers. However, once we reached the base of the final ascent up to Peak F, we took the ridge proper and enjoyed some of the best class 4/low 5th class climbing of the day. 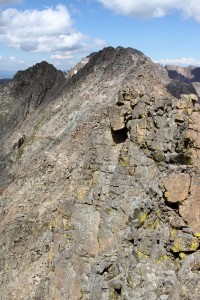 Looking back at the traverse from Peak E to Peak F 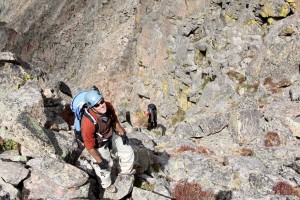 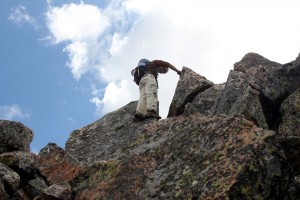 J topping out on Peak F 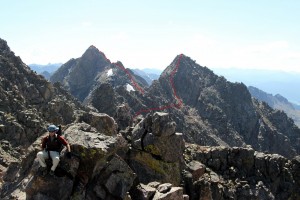 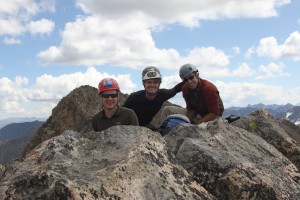 We then descended off to the south via class 3/4 rock to the Peak F/G saddle staying again slightly to the right of the ridge crest. 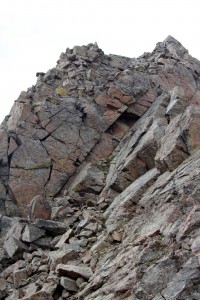 After eating a PB&J, we ascended the ridge up to Peak G and then skirted a gendarme to the left thru a notch on the ridge’s left (northeast) side. Tackling Peak G’s remaining ridge crest to the summit would be mid 5th class climbing with high potential for big rockfall, so again we skirted around to the ridge’s right (southwest) side and ascended class 3/4 rock with a few low 5th class moves to the summit (see our approximate route up Peak G in picture #23). 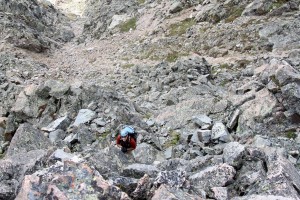 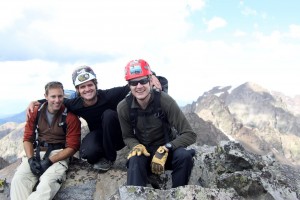 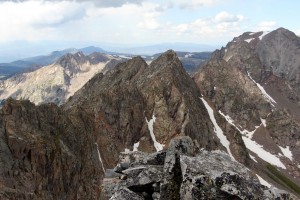 While we had the motivation in us to continue the ridge south to Peak H, it was 1:30pm and we could see thunderheads and rain falling to the west. Thus, we descended back to the Peak F/G saddle. 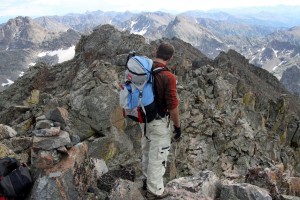 Per lordhelmut’s July 2010 TR, I knew we could descend the southwestern couloir to the valley floor from the Peak F/G saddle. 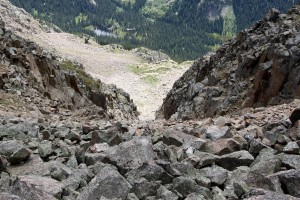 Our descent couloir from the Peak F/G saddle 3000′ down to the Piney River valley floor.

The couloir was indeed tough on the knees as expected, but eventually we reached the grassy meadows only about 1000′ above the valley floor and took a well-earned rest. Another 45 min to an hour of descending down steep, grassy slopes and thru forests brought us to the Upper Piney Lake trail where we took a right. Another 2 miles and 45 minutes later, we arrived back at camp pretty happy with our day’s work. All in all, it was a great adventure with two of my best buds in what is becoming my favorite range in Colorado. I am looking forward to a few more trips and traverses in the Gores this Fall. I hope this TR can be of use to potential Ripsaw Ridgers when combined with lordhelmut’s TR from over a year ago. I want to thank lordhelmut for his TR which provided us some direction on the Ripsaw.