Where to start with this one. This route has been on my radar for years. My good pal Jesse Hill and I attempted this route in late July 2015, but little did we realize what late afternoon downpours would do to the first 2 pitches the following day. We got shut down, but I salvaged the day by taking a run up neighboring 13er Mt. Daly. That whole account can be read here. 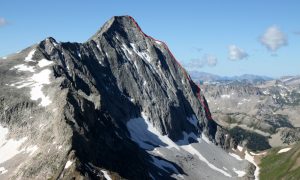 Anyway, I had heard the Northwest Buttress up Capitol was a bit “loose” and objectively dangerous because of rockfall, but honestly now having climbed it I can say only one small 100′ section gave me any pause with regard to loose rockfall potential. I think any climber who may think this a “death route” probably spends most of their time in climbing gyms, at crags, and not in the alpine. If you are a rock climber and regularly climb peaks, especially in the Elk Range, and are used to loose rock being just a part of climbing mountains, then this route likely wouldn’t feel too objectively dangerous. I extremely enjoyed this route and think it is potentially the best alpine adventure I have done. I would definitely do it again and plan to do the Early Times (5.10) initial headwall variation next time.

J and I were trying to make this happen all summer, but schedules and weather forecasts kept getting in the way. I knew we needed a great forecast within a dry spell so as to not repeat my previous mistake. I kept thinking we needed to wait until the fall and the bluebird days of September. However, this is when J and Megan were expecting their second daughter, so it may not work out timing-wise. Fortunately, good pal Chris Baldwin was taking on this whole climbing activity full-throttle like he did everything else and said he would love to go with me. I’m so happy Chris and my paths crossed earlier this summer as he has been a super friend and climbing buddy. I have so enjoyed “showing him the ropes” so to speak. Anyway, unfortunately for J, we targeted Friday, September 14, which was Megan’s due date. He understood, but was obviously bummed. However, I promised him we’d go back and do the 5.10 variation. Chris and I would attempt the original 5.9 Northwest Buttress.

After a 4 year old birthday party at the park with Sawyer and a lost key incident in the Baldwin family, Chris and I were on our way in my Tahoe to the Capitol Creek TH late Thursday night. We arrived at the TH around 11pm and promptly got some shut-eye. Up at 2:50am, we had some awesome glazed croissants and Nescafe instant coffee courtesy of Mr. Baldwin and set out up the Capitol Ditch trail around 3:35am. I had my 60m/9.8mm rope in my pack while Chris had my alpine rack in his. We cruised to Capitol Lake in about 2 hours via headlamp under the still night sky. We took a pit stop at the shore of Capitol Lake en route up to Capitol Pass for a quick water refill and a bathroom break. It was chilly out for sure and a bit breezy, but we reached Capitol Pass maybe 7-7.5 miles in around 6:30am. The wind was really making things rather chilly and after scrambling up 400′ to the base of the initial headwall we took shelter on the leeward side among some rocks. We racked up, flaked the rope out, and had some PB&J again courtesy of Chris’s chef skills. We probably waited until 7:30am before we started climbing just to see if the wind would die down and for the outside air temperature to rise a few degrees. It was still chilly. We made our way out the ledge and I set off up the 1st pitch. 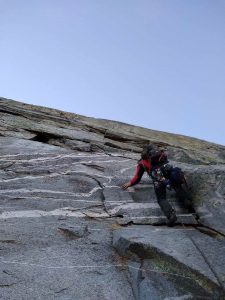 Me setting off up the 1st pitch. Photo by Chris

After 50′ of climbing I came to a nice stance on a ledge and the old pin I bailed off of 3 years ago when the route was essentially a waterfall. I slung the pin and moved off across the wide horizontal crack, which I basically laid back and really ran it out as the crack was too large for any gear I had with me. I then plugged a #3 cam and moved vertically into the crux “off-finger’ crack which went for 30′ to the anchors. This remaining crux felt harder than 5.9 to me. I’d give it a 5.9+. Usually, an “off-finger” crack is not 5.9 and the cold and wind only further sandbagged the rating. Nonetheless, there are a few facial features for the toes especially on the left side of the crack, which helped, but it was so slick given how chilly it was out. There is a small “thin hands” pod that is a nice hold, but other than that its poor face features for your feet and finger holds. I led it cleanly to the anchors (only one pin, really) and had a good stance where I set up my self-equalizing anchor with the help of two #2 cams. I shouted down to Chris and he was ready to climb. He really really did well having not much experience at this. The crux finger crack section gave him pause and a few issues, but he pulled the moved and made it to me just fine. He was a bit frustrated because he hung on the rope thinking he wasn’t ready for this, but I did my best to settle the good lad down by saying that the pitch was a lot tougher than the 5.9 rating. 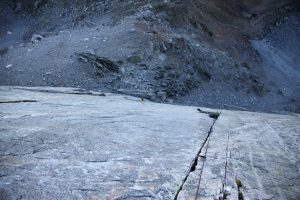 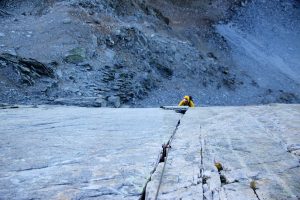 Chris in the thick of it! 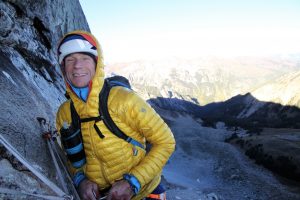 Chris stoked to be with me at the pitch 1 anchor

I gathered my gear and slings from Chris, he put me on belay, and I set off up pitch 2 (5.8). It was a fun 5.8 move to get into the chimney and then it was cruiser climbing for a good 90′ to where the angle eased off and I set up an anchor to bring Chris up. 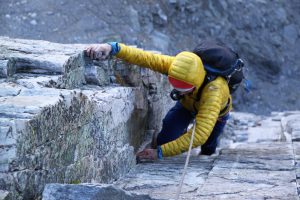 I think Chris felt much better about things after pitch 2. He goes “see Brandon, now that’s much more in my wheel-house.” He is a funny one. Anyway, we stowed the rope in Chris’ pack and set off up the super fun and enjoyable class 4 scrambling for 600′ up and around to the right of the base of Unicorn Spire. 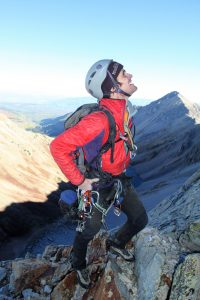 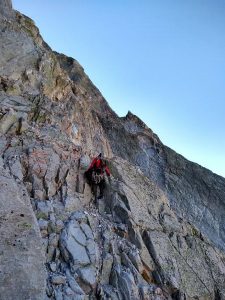 Me making my way on the 4th class rock. Photo by Chris 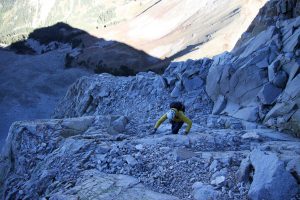 The nastiness of the route really only reared its head in the final 100′ or so of climbing to get to the ridge crest above Unicorn Spire from the west. It was definitely low 5th class climbing on boulders seemingly held to the mountain only by sand. Chris took one line and I took another. Each of us securely tested each hold and came out alright up top on the ridge proper. What lay before us was probably the best and most fun climbing of the entire route. About 700′ of 5.0-5.7 simul-climbing up an exhilarating and airy arete that can be seen from the Capitol Creek TH! 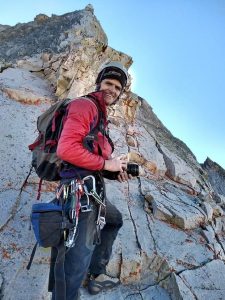 Ready to take-off up the arete! Photo by Chris 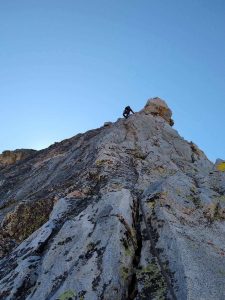 Making my way up. Photo by Chris 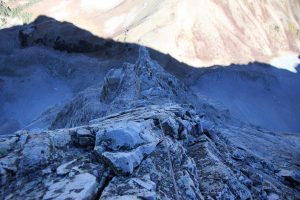 We reached the top of the 2nd tower and got our first sunshine of the day which felt oh so nice and rejuvenating. We de-roped and scrambled across the ridge above what was left of the heart-shaped snowfield over to the base of the 5.7 upper headwall pitch. 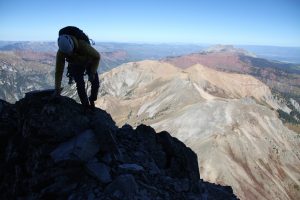 Chris on the 4th class ridge 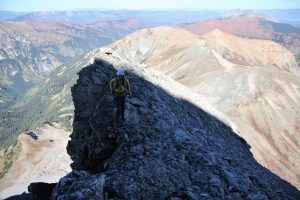 A short walk/scramble to the base of the final headwall

There was a pin at the base of the headwall likely to protect the belayer because the first 50′ of the pitch is pretty run-out with no gear. I believe I climbed the small roof more to the right (west) than other folks have noted in their pics, but it felt more solid to me. I set up a belay about 30′ above the roof where I could still see Chris. 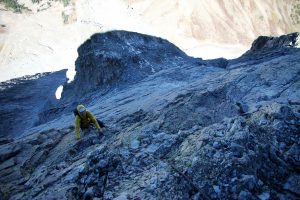 Chris on the upper headwall 5.7 pitch

We then decided to simul-climb the rest of the headwall above us. I set off and finally got into the glorious sunshine again. 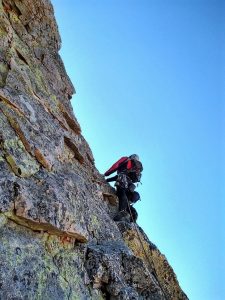 Setting off on our simul-climb of the remaining upper headwall. Photo by Chris

Its a long way down 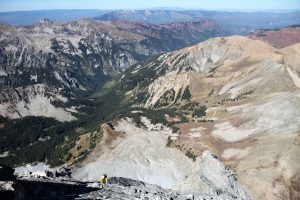 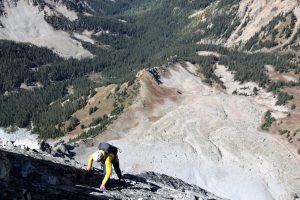 Chris almost to me on the ridge

Chris reached me on the ridge and we literally only had 30′ to the summit. We were both pretty ecstatic with everything (the weather included) and we de-roped and scrambled the rest of the way to Cap’s summit. 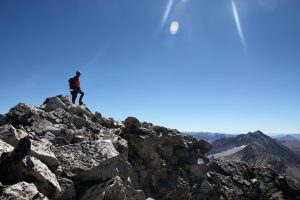 Chris shot this of me on Capitol’s summit 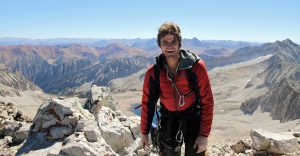 So happy to have climbed the Northwest Buttress – finally!

We summitted around 11:30am so it took us close to 4 hours to climb the route. We saw no one on the summit or for that matter on the entire mountain this day. Unbelievable to me, really. We spent close to an hour on the summit relaxing and taking in the sunshine and the moment. 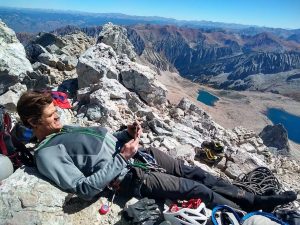 Relaxing and texting Kristine we are all good. Photo by Chris 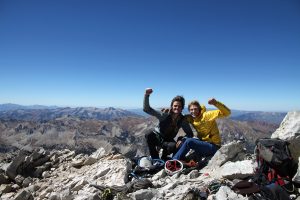 Capitol summit (14,130′)! This was Chris’ first time up Capitol, which was extra special 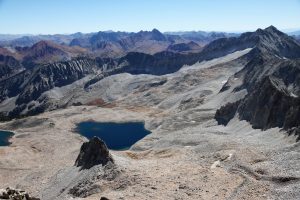 Looking out towards Snowmass Mountain, the Bells, and Pyramid 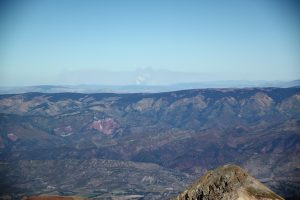 The fire north of us near Steamboat

We figured it was time to roll around 12:30pm and so reluctantly we departed the summit down the familiar knife-edge standard route. It was super fun cruising down the standard route with no one else on the mountain. 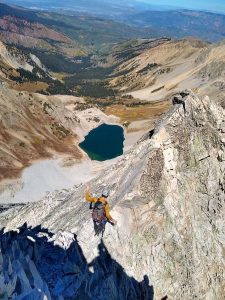 Me taking the ridge-proper down the northeast ridge. Photo by Chris 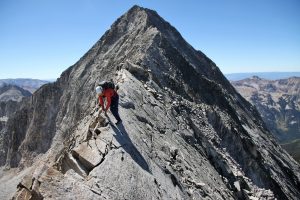 And out across the knife-edge. I think he really enjoyed the standard route as well as he wants to go back at some point

We took a sigh of relief on top of K2, stowed our helmets, and let Kristine and Kimberly know we just had the slog out now. We made our way down the never-ending boulder field that I hadn’t been on in years and over to the Capitol-Daly saddle to reach the most welcomed trail. After a refill of water and a snack/sandwich at Capitol Creek just below Capitol Lake in the warm sunshine, I guess we had to motivate to hike the 6 miles out. It was pretty darn hot and my Lowe Alpine pants were heavyweight. So, I decided to take em off and hike out in my boxers. I mean my Patagonia silkweight boxers look like shorts, right? Hopefully, I didn’t embarrass Chris, but this wasn’t my first rodeo in just my boxers. He just had to get used to it. We arrived back at Capitol Creek TH around 4:30pm for a total time of 14 hours, but we did take several breaks on the way down and a good hour on top. So, maybe not all that shabby. We packed up, stretched out our backs (we ain’t so spring chickens anymore, that’s for sure) and made the trip back to Edwards. We met up with Kimberly and the Baldwins’ friend Patrick as well as Kristine, Sawyer, & Kona at the Craftsman around 7pm in Edwards for some celebratory beers and dinner. This was a fun day.

All in all, I just plain loved this route. I can’t wait to go back with J and climb Early Times (5.10). Maybe next September. I’m just so glad it finally worked out before our second child (yep, Sawyer will have a baby brother) enters this world come Halloween. Thanks again to Chris for a fantastic climb.