After last September’s successful climb of the original line up Capitol’s Northwest Buttress with Chris Baldwin, I really wanted to go back and try the harder 5.10 variation called Early Times established by Jeff Jackson & company circa 2010, which ascends climber’s right of the original route’s 5.9 pitch in four awesome pitches up the initial steep headwall. I had promised J I would go with him as he wanted to visit Capitol’s summit again after not having been on the mountain in 15+ years. After weeks of trying to get a perfect fall weather window and shifting schedules within our busy lives, we targeted the same date that Chris and I had climbed the route the previous year, September 14. Now having 2 kids each, the less time away the better and easier on our spouses. So, I picked J up at 2am on a Saturday morning and made the drive over to Capitol with very heavy eyelids. After some coffee, oatmeal, & bananas on the drive to pep us up (well, J doesn’t drink coffee for whatever crazy reason and never has), we left the trailhead around 4:30am making our way up the familiar Capitol Ditch Trail under headlamps. We cruised the 6 miles to Capitol Lake in maybe 2 hours and 20 minutes and got our pre-dawn glimpses of old Capitol Peak’s north face and northwest buttress. 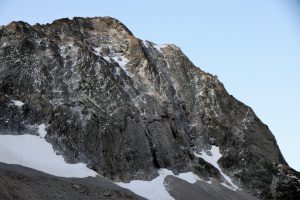 I was a bit disappointed to see the fresh dusting of snow on the north face and what seemed to go close to the northwest ridge itself as well as the shallow 4th class bowl below Unicorn Spire. However, we were still confident we could mostly avoid the snow. We refilled a bit of water in Capitol Lake and made our way up to Capitol Pass at around 12,000′. It was then a grunt up the final few hundred feet to the top of the talus cone to the base of the initial headwall and our intended route. 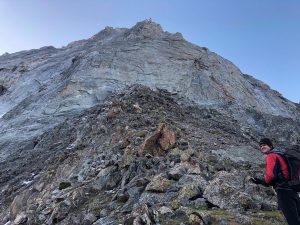 The route is sure intimidating from the talus cone here, but excitement was high!

We caught up with another party of two who were attempting the original line to the left of Early Times. I gave them what beta I had on the initial 5.9 pitch and route-finding up the route itself above the headwall. It was pretty chilly no doubt and the wind was whipping a bit. Climbing hard 5.10 in these types of conditions plus being in the shade at over 12,000′ is a far cry from cragging in warm sunshine at 7,000′. We racked up and I led on up the 1st 5.10c crux pitch maybe around 8-8:30am. The cold was tough to deal with, but got better the higher I went. There were several distinct cruxes in my opinion and some tricky moves protected by only a nut in some places, but I made it to the anchors after 100′ of climbing or so and set up to belay J. 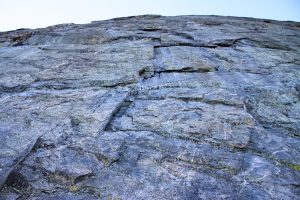 The initial crux headwall. The 1st pitch of Early Times goes up the center dihedral 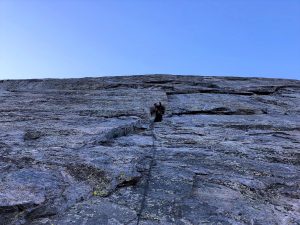 Me on the initial, easier climbing of pitch 1 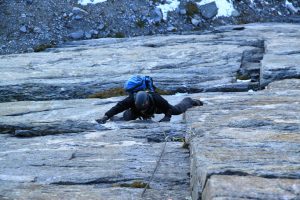 J in the thick of it on pitch 1 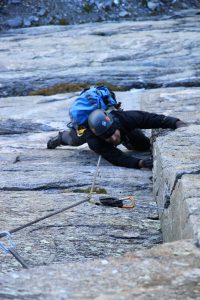 I don’t know how J climbing this pitch wearing gloves 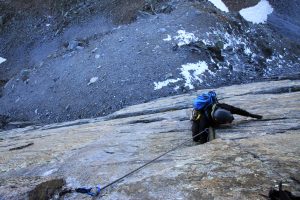 The other team of two were heading up the 5.9 pitch on the original route and actually were trying to dislodge the #0.5 purple cam Chris and I had lost exactly a year ago on that route. We could communicate with them and had a good laugh at the fact that it was mine. 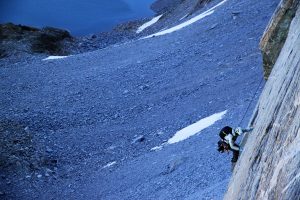 The follower on the original 5.9 pitch to our east 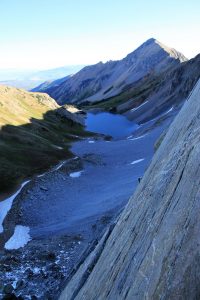 A more scenic shot of the climber on the original 5.9 pitch as seen from the top of the 1st pitch on Early Times

We swapped the rack and I belayed J as he led off up the mentally taxing 5.9+ pitch 2. The climbing initially surmounted a small roof protected by a bolt and then angled up and right following discontinuous cracks. 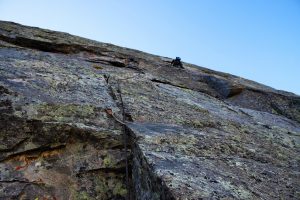 J on lead up pitch 2

The crux came near the anchors at the top of pitch 2 where J was making the moves first and then placing gear below him. A scary way of leading. He really persevered and did so well and made the onsight. 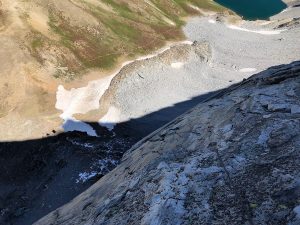 Pitch 3 was 5.8ish and after an airy, no-pro traverse west to a small crack, I led on up this short pitch to a decent belay. 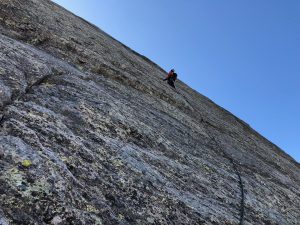 Me leading up pitch 3 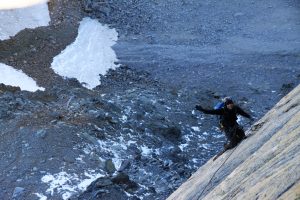 J back down at the pitch 2 belay

We then did the final swap of the rack and J took us home up the 5.8 pitch 4 to the anchors at the top of the headwall. The moves at the top of pitch 4, or at least the moves we did, were certainly not 5.8 in the least. Maybe we were off route, but they were much harder than 5.8, that is for sure! 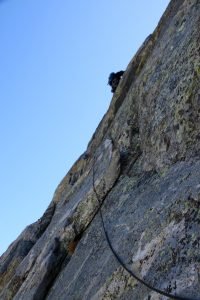 As J brought me up to him, the other team of two was finishing up their 2nd 5.8 chimney pitch down below us to climber’s left. Another team of two had started up the original 5.9 route as well below them. We stowed the rope and began the really fun class 4 climbing up and right avoid the snow in the easiest terrain which Chris Baldwin and I climbed in last time. 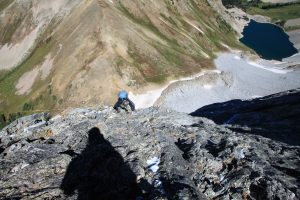 After climbing the scariest, loosest, & blockiest pitch (in my opinion) below the actual arete from the west, we crested out on the arete itself slightly above Unicorn Spire. We roped up and began the 500′ or so of awesome simul-climbing. The climbing on the arete really ranges anywhere between 5.0 and 5.7. 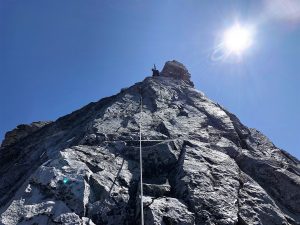 Me leading up some 5.7 terrain on the arete 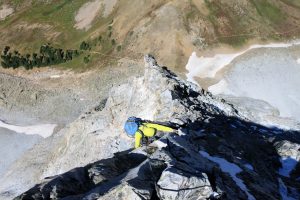 What made the upper part of the arete a little more sketchy than last time was the fresh snow. The snow was a little more covered and deeper towards the top of the arete bypassing the small tower to its left (east) when the angle eased up a bit. I was essentially tip-toeing on the dry exposed rock, brushing off small ledges, etc on 5.4 terrain. J did not enjoy this part one bit. His feet being blocks of ice didn’t help either. Nonetheless, we topped out at the small saddle above the heart-shaped snowfield and took a sigh of relief. What was next was the 5.7 upper headwall pitch, which I told J he should do since I led it last time. 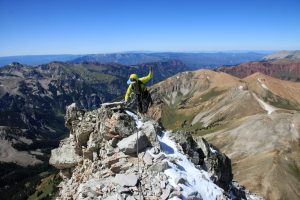 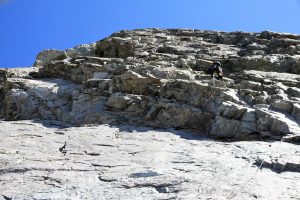 J leading over the mini-roof on the 5.7 upper headwall pitch 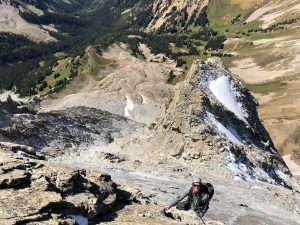 Me on this same pitch enjoying the sun

At the belay, I told J we were really close – just a few hundred feet below the summit – and that we should just simul-climb from here. I led on away, but belayed J up to me briefly to protect a few exposed moves and not risk them in a simul-climb. 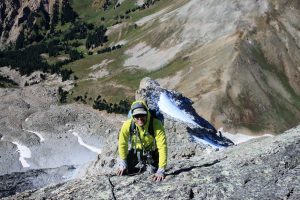 J almost to me on the upper headwall. The heart-shaped snowfield and 4th class saddle can be seen below

I then told J to take us home to the top and he led the final few hundred feet of mid 5th class terrain in the sun to the summit ridge. 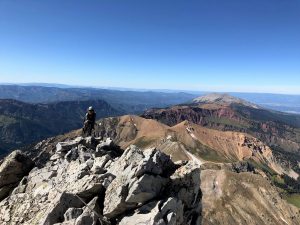 Me on the summit ridge with Mt. Sopris in the distance 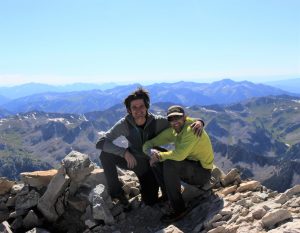 What a gorgeous summit it was. We arrived maybe around 2:30pm though I cannot really remember. The weather couldn’t be better – my favorite weather of the year. Warm sunshine with a tint of cool, crisp fall air. We probably spent 30 minutes on top texting Kristine & Megan that we were just fine and may be late getting home. 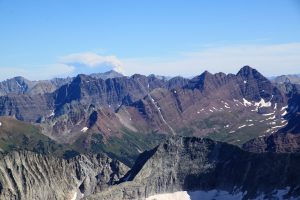 Looking southeast from Capitol’s summit to Pyramid, the Bells, and the wildfire near Salida 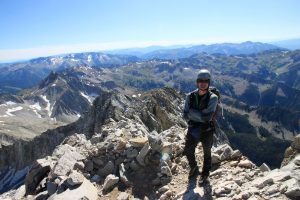 Me on Capitol’s summit – my favorite in Colorado, by far. I think this was my 6th visit to its summit

J and I descended the standard northeast ridge pretty quickly and had fun across the knife-edge ridge one more time. J had not crossed that ridge in over 15 years and really didn’t remember it at all. 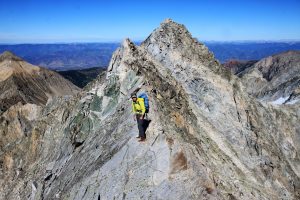 J walking the ridge with K2 beyond 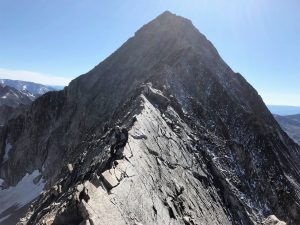 I always forget how long the descent from K2 back to the Capitol-Daly saddle can be and just hard on the body, especially a torn meniscus (me), with all of the boulder-hopping. No matter though as J and I just took our time and chatted about past climbs, future climbs, and life in general. It was a beautiful sight seeing the sun actually beginning to shine on the lower crux headwall of Capitol’s northwest buttress at around 4:30-5pm. Maybe that’s the time to actually climb the lower headwall! 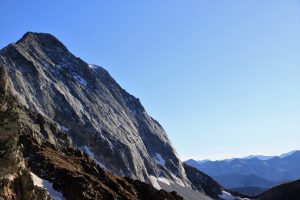 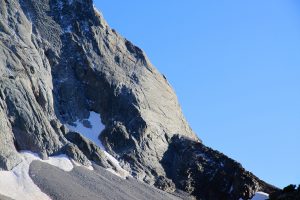 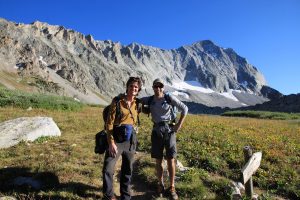 Happy to be on the way out and have an easy 6 mile stroll back to the car, but the weather was so unbelievable I sort of wanted to stay out all night!

It was a nice hike out and we just made it back to the car around 8pm having just turned on our phone lights making for about a 15.5 hour RT day. Definitely longer than Chris and I took exactly one year before, but more technical pitches take time! It was a phenomenal day. One for the books. A big burger at the Glenwood Springs brewery was just what the doctor ordered and we finally arrived home about 11pm. I’m so happy my meniscus did well on a long day like this. I guess we’ll just continue to see how it goes and if it gives me further problems. Maybe it will just lie dormant for awhile. The older I get the more physical ailments will come about, but as long as I can continue to enjoy days like this, I’m a happy man.