Wow, its been forever since I posted something. Its been a COVID world, but I sure hope we are close to righting the ship. I wanted to share another fun spring ski-mountaineering day I enjoyed with good pals Ben Conners & Brian Miller last May 2019. The southeast face of 13er Snow Peak in the Gores was on the docket. Though I had been up Snow numerous times, I had never skied it – none of us had. It looked like a great face full of snow with many lines to be had all the way down to Gore Lake. Meeting maybe around 7am, we made the usual pilgrimage up Gore Creek and then turning due north up the “skier’s route”
towards Deluge Lake. We were thinking to just skin all the way to just east of Deluge Lake and then booting up to Snow Pass to take the normal route to Snow’s summit up the north ridge. However, we were skinning along and just decided to take one of the steeper west-facing couloir which topped out directly on Snow Peak’s spicier south ridge. 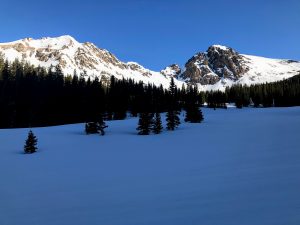 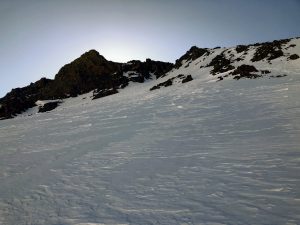 The couloir we ascended

We donned our crampons and began the boot up the couloir. Pretty fun climbing ensued until Ben and I topped out on the south ridge and looked ahead to what we needed to climb. Brian topped out soon after. 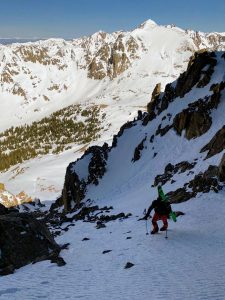 Me in the couloir with Grand Traverse Peak behind. Pic by Ben

I remembered climbing Snow’s south ridge in fall with Kristine, J, Brett, Rainie, & Kona and I do remember some class 3/4 scrambling. So, now it was snow covered which I think made it even cooler. 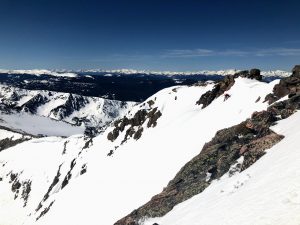 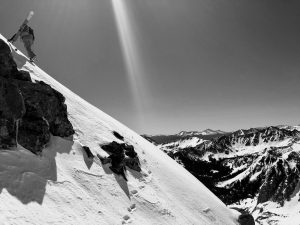 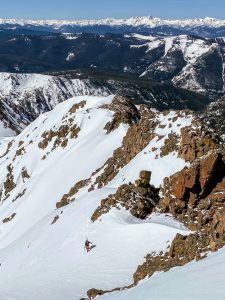 Such a beautiful day to be on a ridge. Pic by Ben 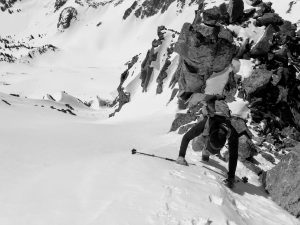 One final steep section to the summit of Snow

Not sure when we topped out, but maybe it was around 11am. It was a beautiful summit. No real wind to speak of. 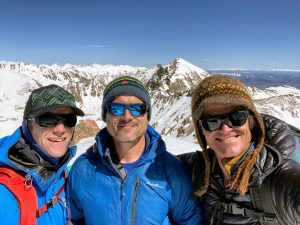 Snow Peak summit with Mt. Valhalla in the background 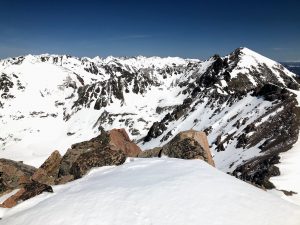 While we could have hung out there for a long time, we did wait an hour or so for the corn to ripen up some. Ben & Brian decided to take the steepest line that dropped right from the summit while I skied down the east ridge some and dropped into this shallower gully that I had previously looked at. 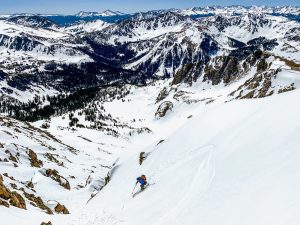 Brian off the top into the steep gully! Pic by Ben 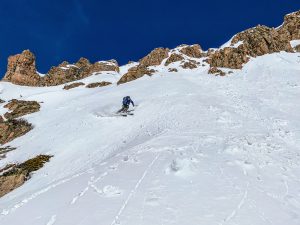 Brian slashing lower down on the face. Pic by Ben

We regrouped at the bottom of the face after our respective lines and skied the awesomely corny apron all the way down to Gore Lake. 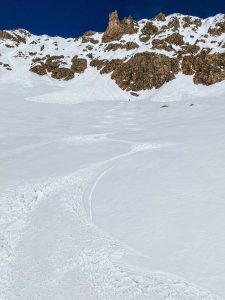 We then regrouped and skied the treed terrain below Gore Lake into the small drainage and then south down to the Recen brothers gravesite at Gore Creek. This was followed by the 5 mile ski out Gore Creek, which at times is frustrating, but it was such a beautiful and warm day that it was pleasant. Another fine Gore outing with two of my favorite Gore aficionados. I didn’t want to forget to write up this day even if it is 7 months later! Gets me very excited for spring 2021 ski mountaineering adventures.