The 13er Mt. Arkansas (13,795’) had been on my radar for some time, especially the northeast couloir, for a spring climb/ski. However, with so much recent snow and avalanche accidents in the central and northern mountains of Colorado in previous weeks, I decided to hold off on this couloir and climb the north ridge, which looked like a fun challenge with some exciting scramble moves thrown in for extra credit. Arkansas is easily accessible from Highway 91 just south of Fremont Pass between Copper Mountain & Leadville and its north ridge offers a really fun climb in only about 5-6 miles roundtrip and under 3,000’ of vertical elevation gain. The final few hundred vertical feet to the summit has some fun scrambling as well, which goes at class 4, although these crux gendarmes can be bypassed on the ridge’s west side most of the time. For us, however, with the amount of snow and avalanche potential, it was much safer (though more exposed) to stay on the ridge proper up and over the gendarmes. Kristine, good friend Reid Jennings, and the dogs attempted this ridge a week ago only to be stopped short at the false summit primarily because we all didn’t think the dogs would be able to safely complete the ridge to the summit. The summit was still a ways off from where we turned around, though only a few hundred vertical feet. It was a little disappointing, but was a fun day nonetheless and good to get up high again with Kristine, Reid, Rainier, & Kona. Rainier is now 10 ½ years old, but still does so well. 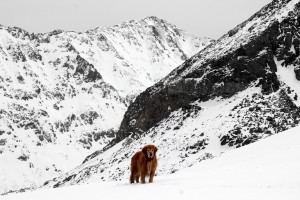 Rainier on Arkansas’ north ridge with the west face of Mt. Democrat behind on May 5

Little did we know that the high peaks in the central & northern mountains of Colorado would get feet of snow a few days later, which made planning a reattempt a little discouraging. However, the weather looked good for the next Saturday morning, May 11, with clouds/snow coming in after 1pm and we’d be mostly on a ridge decreasing any exposure to avalanche terrain.  I knew there would be a lot of new snow up high, but didn’t think the breaking trail would be as extensive, especially on the upper north ridge, as it was. If you got to break trail, I always think “well, we all just get a better workout”. Plus, J & I had a birthday party in Blackhawk that evening so combining this Arkansas climb with Blackhawk and some granite crack climbing at South Platte the next day sounded like the right weekend recipe.

Fellow engineering co-workers and friends Mike Santoro and Zac Wurth joined us on the adventure as well. We started snowshoeing/skinning around 8:30am from Highway 91 with J being the only one on AT skis. In retrospect, it would have been nice to bring the skis as well. C’est la vie. We attained the north ridge head on after making our way through nice tree glades that would make for fun low-angled ski terrain. 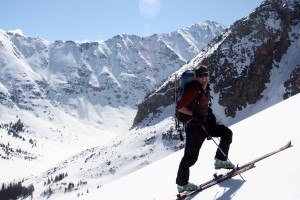 We met two very nice ski-mountaineering fellows, Ed & Bryan, after we climbed the steeper snow and rocks to directly attain the north ridge. There was significant new snow all around and was some legitimate trail breaking up to the saddle where the north and northeast ridges intersect to form the north ridge to the summit. It was a nice day thus far and was fun making our way up the easy north ridge admiring the view. 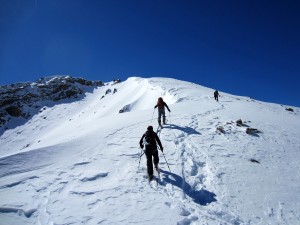 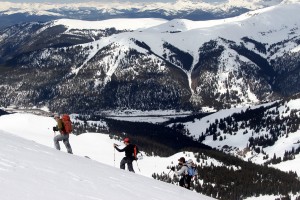 J skinning with Ed & Bryan, fellow mountaineers we met on the north ridge 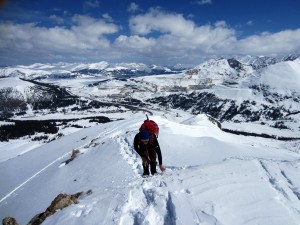 At this point, we traded our snowshoes and skis for ice axes and crampons for the ridge climb to the summit even though we would have liked some flotation for the deep snow. However, the ridge was too steep and dicey for snowshoes and skis/skins and so we left them at the saddle. Bryan & Ed then clicked into their skis and skied the wonderful north chute down into the north bowl separating the north & northeast ridges. The north ridge up to the false summit where we had turned around 5 days earlier was some really deep snow. 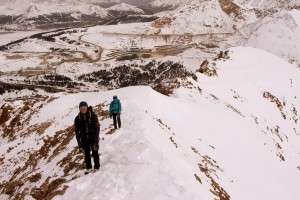 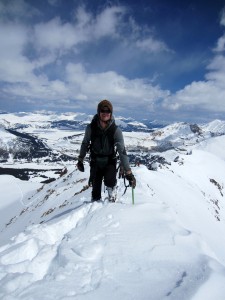 Me at the same spot on the north ridge below the false summit 5 days later on May 11. Notice how much more snow there is

However, beyond the false summit, the trail breaking let up a bit as I’d sink in only 12” and not 24”. I went ahead to scope out the crux moves up and down the gendarme and it proved to be very doable with some exciting moves and exposure. Zac & J followed me while Mikey remained on the false summit observing our progress from a great perch in the sky as he thought he would be too slow with the incoming weather. The mountain will always be there. 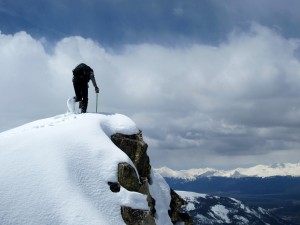 Me topping out on the gendarme on the north ridge proper

The final slog up to the summit after downclimbing the gendarme was a slog in the fresh new snow. We could see snow showers in the distance and clouds were building yet it was still decent weather over Arkansas. We made the summit around noon and after about 20 minutes started the descent, which was much easier now that we had a bootpack. 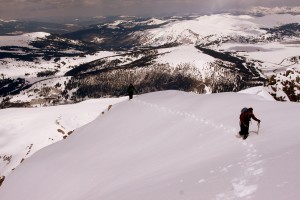 J & Zac making their way up the north ridge 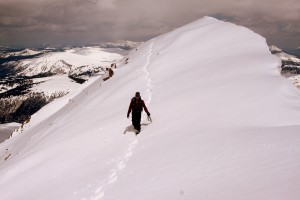 J almost to the summit 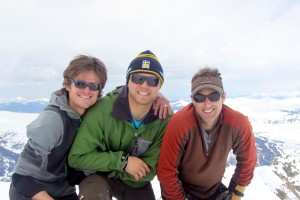 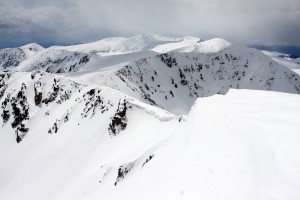 View south to Mt. Sherman from the summit 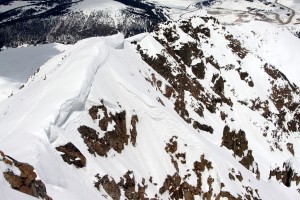 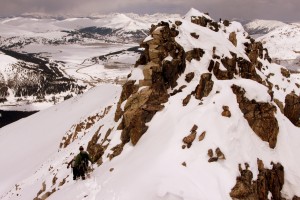 Heading back down to the notch 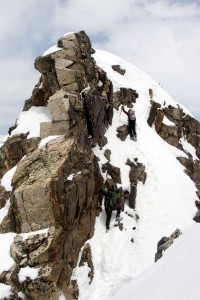 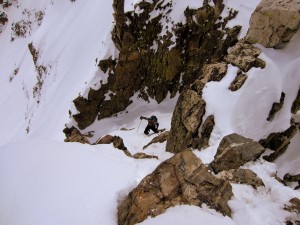 Me climbing back up the gendarme on our descent 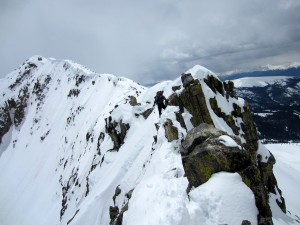 Me negotiaing the class 4 crux on the way back down

Me on the class 4 crux 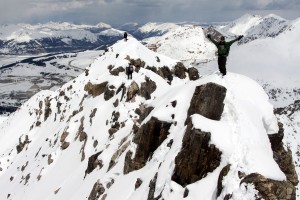 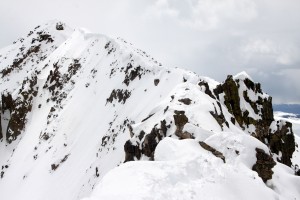 Looking back up to Mt. Arkansas from the false summit

Soon enough we were back on the false summit with Mikey and then back down to where we stashed our snowshoes and skis. J & I turned our beacons on and I observed him skiing down the north chute from the north ridge. He later said that those were some really fun turns as they sure looked like fun from above. 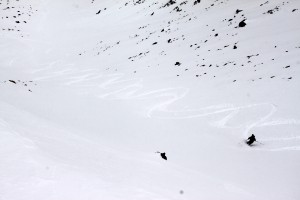 The three of us on snowshoes reached the cars around 2:30pm with J obviously reaching them much earlier. It was a great 6 hrs up on Arkansas and I was happy to have reached the summit this time around in some pretty tough conditions. One thing I did notice was that how much the snowpack is settling, even with the recent snow, which makes me more optimistic in terms of avalanche safety in the upcoming weeks for some ski-mountaineering trips.

Ski tracks down the north chute into the north bowl from J, Ed, & Bryan

J & I then set off for Golden and then late night fun in Blackhawk for the 35th birthday of our good climbing friend, Matt Reigner. After an evening of rooftop hot tubbing and craps playing, where everyone just about broke even (I just observed and enjoyed cocktails), we met our good friends Jesse Hill & Derek Drechsel in the South Platte area for some granite crack climbing in preparation for J & Jesse’s upcoming trip to Yosemite – a trip I wish I were going on. Next year for sure. All in all, a fun-filled weekend. J & I were glad to sandwich the Blackhawk night with two outdoor-related adventures. I honestly just feel better about spending a night in Blackhawk being able to combine it with some outdoor activities. But, that’s just me 🙂