I first noticed this cool looking peak with a few towers on its north ridge during our traverse between the Harry Gates hut and the Peter Estin hut this past April. Then, I come to research it a bit and find out it is named Avalanche Peak. However, what intrigued me were the towers along its north ridge. 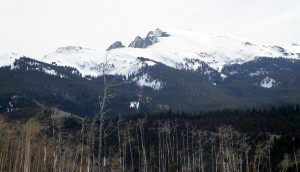 Avalanche Peak from the Lime Creek plateau area as seen this past April. The two prominent towers on its north ridge are visible

I recruited my very young friend and new co-worker, Dylan Friday, who just graduated from Penn State, to come exploring with me. I was also excited to climb at Lime Creek Canyon afterwards. Being young and 22 years old and having not previously scrambled all that much, Dylan was up for anything I had in mind. We left my house at 4:30am and were hiking up the Eagle Lake Trail from Woods Lake maybe by 6:30am. The most wonderful aspect about this area is the remoteness and lack of people. In fact, there was not a single other soul we saw once we left the trailhead. I don’t have too many stats for the day as I really don’t follow that info very closely nor track it, but I always have a mental picture of what distance we traveled and how much vertical gain. The Eagle Lake Trail was good to Eagle Lake and then faded out somewhat. We lost the trail a few times and had to find it again, but the minimal trail certainly made for faster progress than not having any sort of trail at all. After some bushwhacking and maybe 4.5 miles of trail, we made it to Fairview Lake at around 10,700′. I really knew nothing of this ridge as I cannot find any previous beta on it. But, that makes it more intriguing to me and, to put it simply, more fun. Accessing the ridge from Fairview Lake looked to be semi-straightforward up loose gullies, ledges, and class 3/4 rock. 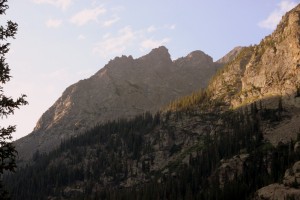 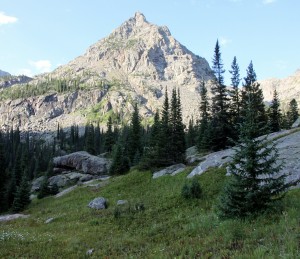 It was around 8:30am now when we began bushwhacking up the lower flanks of the north ridge ascending loose gullies and grassy ledges. We ascended around the northeast buttress of the ridge for easier passage than directly up the northern cliff bands. Armed with only helmets, we had to keep the scrambling at low 5th and below, unfortunately. In retrospect, I wish I had brought a small rack and my 30m/8mm rope. Usually I do take some gear for unknown ridges, but I dropped the ball on this one. Oh well. Next time. 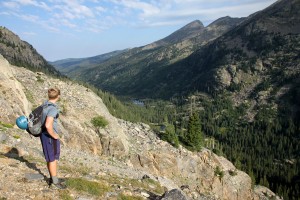 Dylan with Fools Peak in the distance 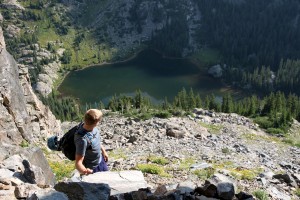 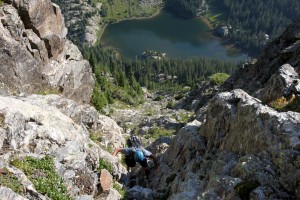 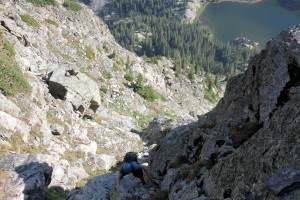 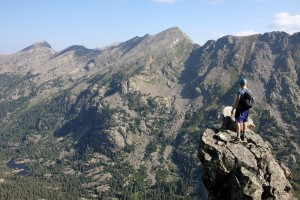 We hit the ridge and were welcomed by a chilly west breeze. I always love trying to stay on the ridge proper and we scrambled up to almost the next small tower’s summit until I realized there was no way to get down the other side without a rappel. So, we downclimbed and went around the first small tower to the east. 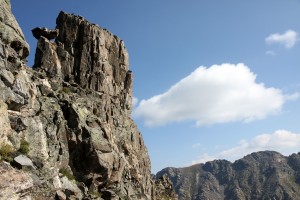 The view looking at the potential rappel down the south side of the first small tower. I can’t imagine how long that large rock has been teetering there on that ledge

We scrambled up to a small saddle and viewed the route up the first of the two large towers that can be seen from the trailhead and beyond. 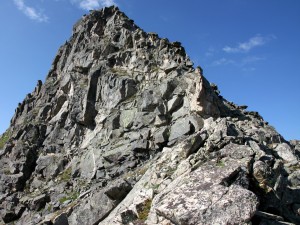 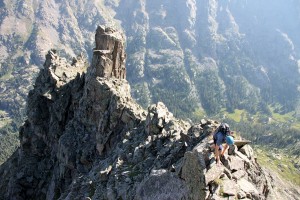 Dylan scrambling up the north ridge of the 1st large tower 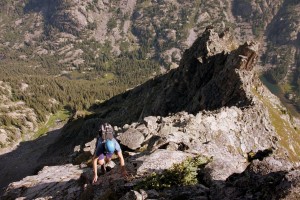 Everything was great until we reached a ledge and a 20′ tall headwall that easily went mid-5th class with questionable rock and absolutely no way around either side. Darn! Would have been very doable with an alpine rope, gear, and some sticky rubber approach shoes. But, with only running shoes and a helmet – nope. We downclimbed the north ridge of the 1st large tower and bypassed it on steep ledges to the east and up to the saddle between the 1st & 2nd large towers. 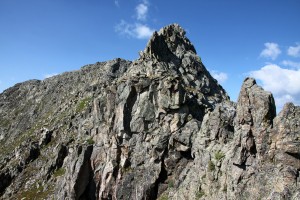 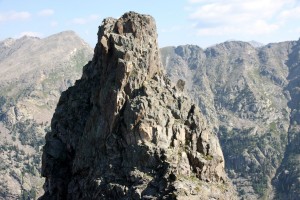 The south ridge of the 1st large tower, which appeared to be definitely downclimable 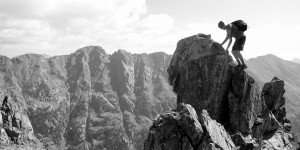 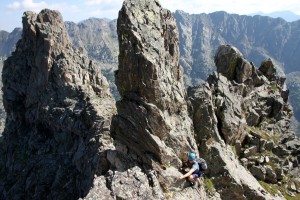 Bypassing a gendarme en route up the 2nd large tower 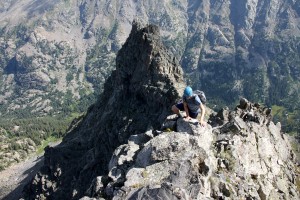 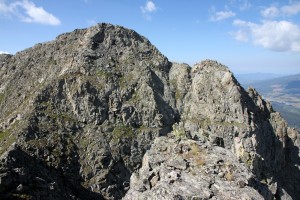 We descended easy slabs and scrambled up class 2+ terrain to Avalanche Peak’s summit. 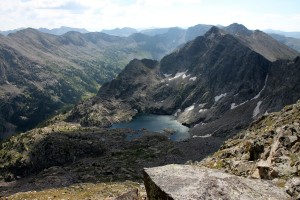 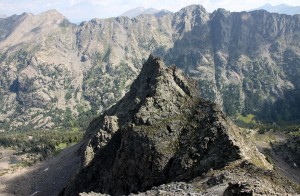 Looking down the north ridge from the summit 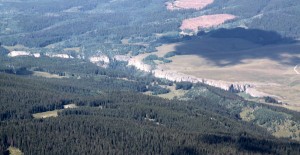 Lime Creek Canyon from Avalanche Peak’s summit. I looked forward to a few routes here in a few hours time

After maybe 20 minutes, we followed what I believe to be the “standard” route up Avalanche via its mellow west ridge. No trail at all, but easy boulder-hopping and grassy fields. 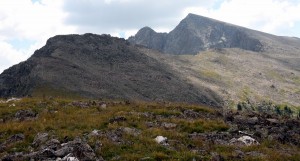 Looking back at Avalanche Peak from its mellow west ridge 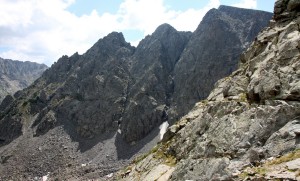 The large towers along its north ridge

We followed the west ridge below treeline and bushwhacking through heavy timber until we came to a limestone cliff and descended a steep gully for 700′ back to the Eagle Lake Trail. For pretty much the entire descent we were off-trail, but it went fairly quick. We then hiked the remaining mile and a half back to the trailhead on the good Eagle Lake Trail arriving around 1:30pm, just about 7 hours after we began. I do look forward to going back and exploring this ridge more in depth. 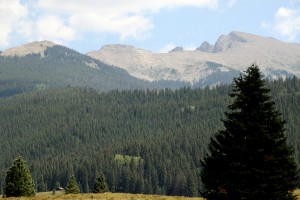 Our approximate journey. Maybe 10 miles RT and we probably did 4,000′ of vertical gain. Click to enlarge

After a sandwich, we rolled over to Lime Creek Canyon and climbed a few routes. However, I really didn’t think climbing a peak would wear me out for climbing afterwards. I was wrong. I guess I’m not 22 anymore. I felt better that Dylan was tired climbing as well. I was definitely not on my A-game, but led a 5.10c and then led one of my favorite routes there called Tears on the North Wall (5.11a). Dylan did great to follow both routes. 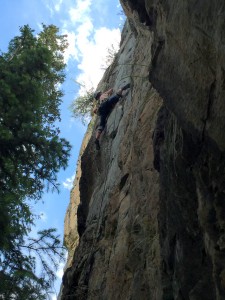 Anyway, it was nice to climb a few routes in the afternoon at one of my favorite cragging areas. I guess I never realized how even a 7 hour peak climb tires me out until I try and climb 5.11 immediately following said climb. I’ll chalk it up to gettin’ old 🙂 Back in Edwards by 5pm to go to the playground with Sawyer, Kristine, and the dogs. It was a good day.